Super warm oceans make May the hottest on record

Last month was the warmest May on record, according to new data from the National Oceanic and Atmospheric Administration (NOAA). While global land surface temperatures were the fourth warmest, it was the ocean surface where things really heated up. Sea surface temperatures were 0.59 Celsius (1.06 Fahrenheit) above the 20th Century average for May, tying with three other months for the largest departure from the average yet recorded.

On land, May brought especially warm weather to Australia, eastern Russia and central Asia, and portions of Canada and Alaska. In contrast, portions of the U.S., China, India, and Central Europe were cooler than usual. Over both land and sea, May was 0.74 degrees Celsius (1.33 degrees Fahrenheit) above the 20th Century average.

The new data means that the top three warmest Mays all occurred in the last five years: this year was the warmest, 2010 was the second, and 2012 the third.

To date, 2014 is the fifth warmest year on record, but that could change as scientists eye the northern Pacific Ocean for signs of El Niño conditions. El Niño, which starts with super-heated oceans, brings extreme weather and unusually warm conditions across large regions of the planet. In fact, many of the world’s hottest years—including 1998 and 2010—were El Niño years. Currently, NOAA says there is a 70 percent chance of an El Niño forming during the summer and an 80 percent chance during the fall and winter of this year.

Global warming—caused by burning fossil fuels, destruction of natural habitats, and industrialized agriculture—has raised the world’s temperature by approximately 0.8 degrees Celsius (1.44 degrees Fahrenheit) since the late 19th Century. While scientists have warned about the crisis for decades, governments have moved slowly to tackle it with greenhouse gas emissions continuing to rise. 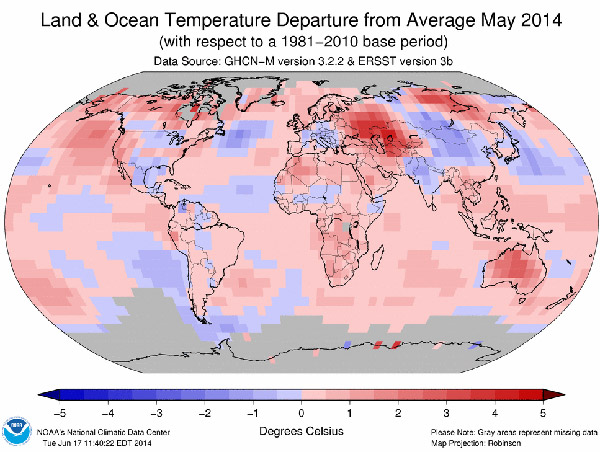 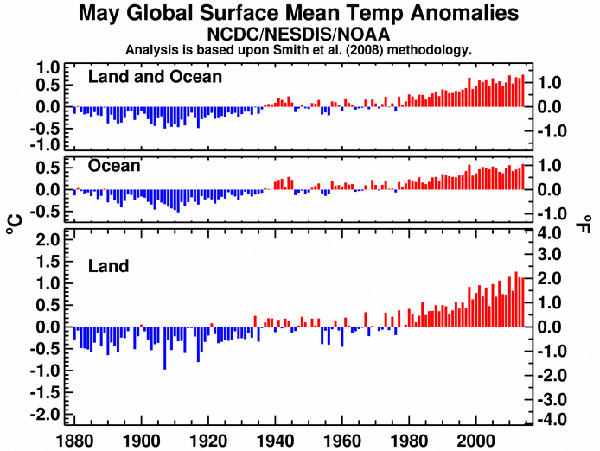 May temperatures since record keeping began: 1880-2014. Graph courtesy of NOAA.

(06/25/2014) Two new reports this week look at the economics of global warming. The first, Risky Business, tallies the cost of climate change to the U.S., including tens-of-billions lost to destruction of coastal property, crop failures, drought, wildfires, and heatwaves. In contrast, the second report, by the World Bank, turns climate change economics on its head.