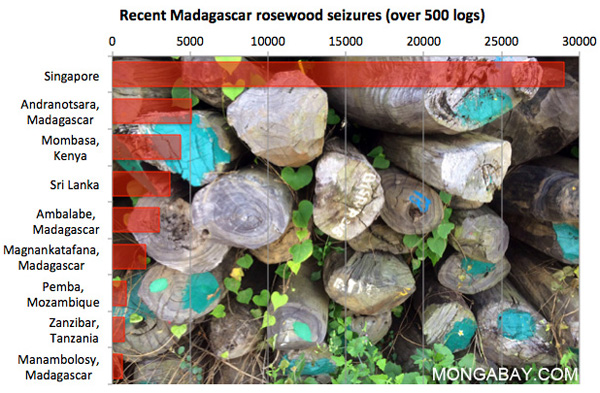 Authorities in Singapore have made the largest-ever international seizure of rosewood logs, providing further evidence that industrial-scale smuggling of Madagascar’s rainforest timber continues despite an official ban on the trade.

Details of the seizure remain sparse since the investigation is still active, but leaked correspondence between officials in Madagascar indicates that the shipment amounts to 3,000 tons, or more than 29,000 illicit rosewood logs. By comparison, the Mombasa seizure that made headlines last week after a probe by the Environmental Investigation Agency (EIA) was 500 tons or 4,400 logs — more than six times smaller. The Kenya seizure came less than two months after Sri Lanka intercepted a 420-ton shipment.

The timber appears to have originated from Madagascar’s fast-dwindling stockpile of rosewood logs, which accumulated after a surge in illegal logging that followed the 2009 coup displacing former president Marc Ravalomanana from power. National parks and forest reserves were ransacked during the ensuing political crisis, but global outcry led the interim government to establish an export ban on rainforest logs. 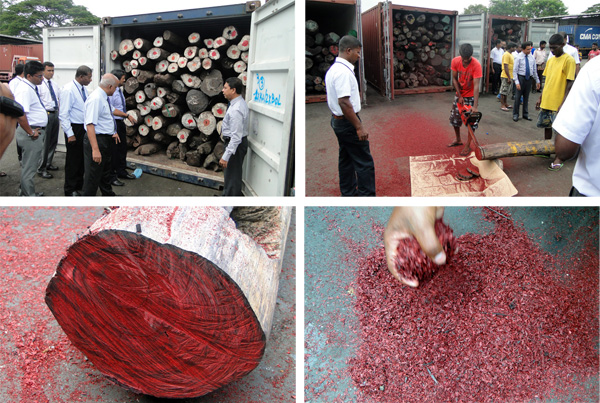 Nonetheless, logs have been trickling out of Madagascar. The narrative to date has been that smuggling is primarily the work of small-time operators who move caches of buried logs from the coast to “mother ships” anchored offshore, but the scale of recent seizures suggests that timber is being surreptitiously loaded via ports in Madagascar. In other words, the trade is at an industrial scale.

According to one source interviewed by Mongabay, the size of the shipments raise questions about whether local officials are involved in the trade.

“The well-organized nature of these shipments indicate corruption at very high political levels in Madagascar,” said the source, who spoke on the condition of anonymity. “It almost certainly involves very senior people from the transition government, some of whom may be part of the government that was recently elected.” 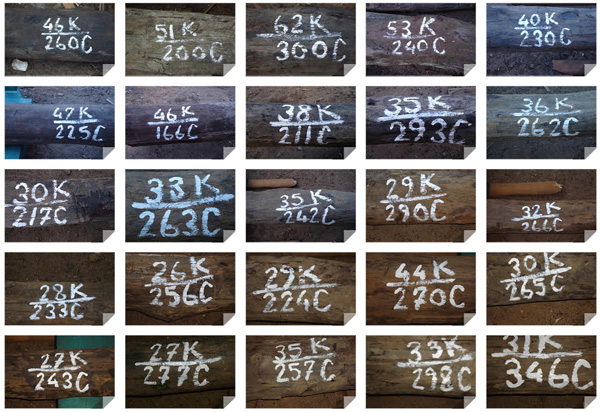 Markings on rosewood logs in Madagascar

Adding credence to that argument are signs that some of the timber was previously seized by the Madagascar government. The logs showing up in overseas seizures are marked with paint and tied together, indicating they had been in the possession of the government.

“In the very least, the fact this timber is showing up in overseas ports indicates that the Malagasy government has failed to secure its rosewood stockpiles,” said the source. 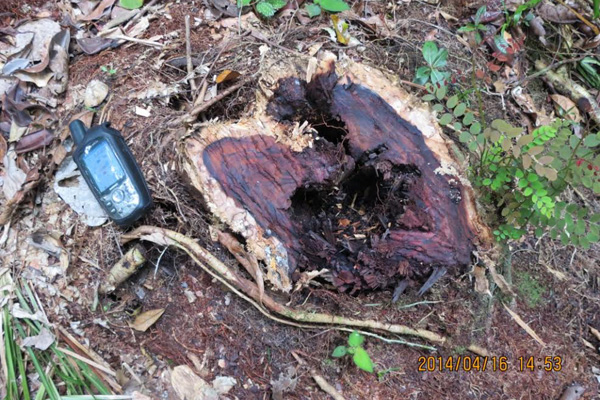 Recently cut rosewood tree in the rainforest of Madagascar 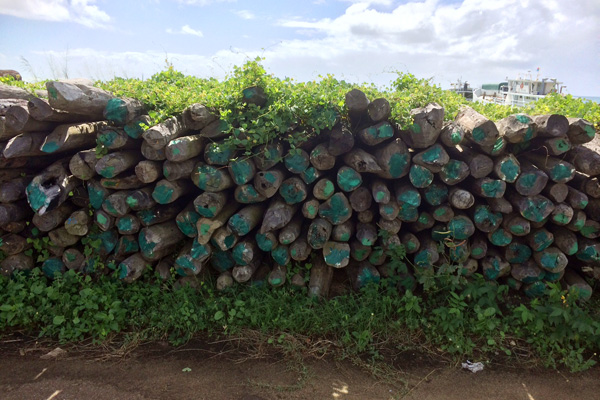 Under a World Bank program, the rosewood stocks were supposed to be inventoried to prevent just this sort of leakage. But that process has been delayed.

“We have just completed an action plan which includes inventory, marking, transport to secure locations and securing,” a World Bank spokesperson told Mongabay. “We are waiting to hear from [the] Government on next steps and on an eventual request for support.”

Whether there will be much timber left in the stockpile by the time the World Bank is allowed to proceed with the inventory remains an open question. Recent seizures in Madagascar and abroad now exceed 50,000 logs worth some $130 million at current prices, or several times that once the logs are processed into wood products like veneers. 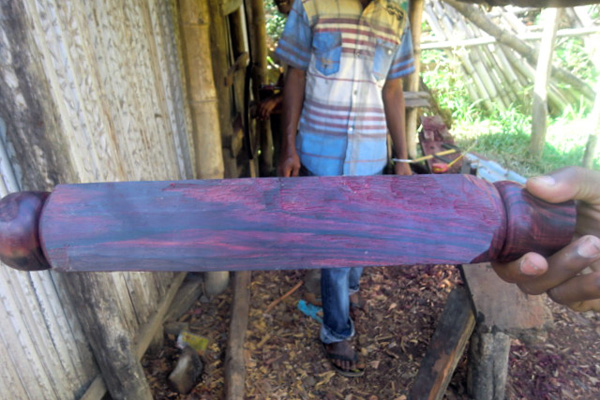 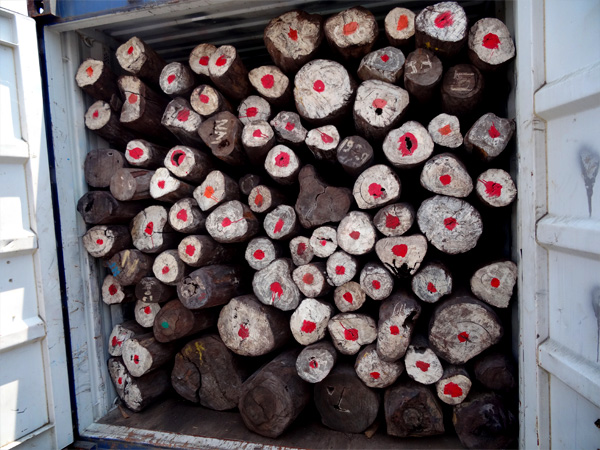 Most of the rosewood is ultimately destined for China where it is turned into luxury furniture. A 2010 investigation by EIA found the price of a rosewood bed could top $1 million in Chinese markets.

Alexander von Bismarck, EIA’s Executive Director, says that addressing the demand side of rosewood will be critical in stopping the trade.

“China’s demand for luxury rosewood furniture is driving the global crisis of illegal rosewood logging,” von Bismarck said in a statement issued last week. “As the final destination for the vast majority of rosewood, China bears a particular responsibility and must close its markets to illicit timber before magnificent forests are destroyed and these precious species are wiped out entirely.”

In the meantime the fate of the nearly 30,000 rosewood logs sitting in an undisclosed location in Singapore remains uncertain. Rosewood is listed under Appendix II of the Convention on International Trade in Endangered Species of Wild Fauna and Flora (CITES), which means its trade is restricted. Since the logs are illegal, they could be destroyed or returned to Madagascar, provided it has the resources to repatriate the logs. At the moment however, that looks unlikely given the cost of shipping the wood back to the Indian Ocean island nation. Nor is it certain that if the logs were returned to Madagascar they wouldn’t just be smuggled out of the country again.

(11/18/2013) Stocks of rosewood illegally harvested during in the aftermath of Madagascar’s 2009 coup are being steadily smuggled off the Indian Ocean island, reports a paper published in the journal MADAGASCAR CONSERVATION & DEVELOPMENT.

(10/02/2011) The Tea Party and the African island-nation of Madagascar are having dueling concerts over the issue of illegal logging, reports the Associated Press. A concert in Madagascar over the weekend was meant to highlight the problem of illegal deforestation in one of the world’s poorest countries. Meanwhile the Tea Party is holding a rally and concert on October 8th to support Gibson Guitar, a musical instruments company currently under investigation for breaking US law by allegedly purchasing illegally logged wood products from Madagascar.

(06/22/2011) The World Bank has approved a $52 million loan to bolster conservation efforts in Madagascar, which have suffered from a collapse in funding and governance in the aftermath of a 2009 military coup, reports Reuters.

(02/03/2011) Two environmental groups investigating the illegal rosewood trade flatly rejected claims by Madagascar’s acting president that they are involved in a campaign to undermine his rule. Andry Rajoelina, the former mayor of the capital city of Antananarivo who assumed power following civil strife in March 2009, claimed last month in an interview with Revue de l’océan Indien that the London-based Global Witness and the Washington D.C.-based Environmental Investigation Agency were attempting to sully his image through their undercover investigation into the rosewood trade. The groups found evidence suggesting that Rajoelina was involved in rosewood trafficking. The evidence included video footage of Chinese rosewood traders claiming to deal directly with Rajoelina.