Researchers have discovered a new carnivorous water rat on the island of Sulawesi that’s so unique it represents an entirely new genus. They believe many more rodent species await discovery in this relatively undisturbed part of Indonesia, but mining and other types of development may threaten vital habitat before it’s even surveyed.

Named Waiomys mamasae and described in a study recently published in the journal Zootaxa, the species is known by a single animal that was caught by hand in a small stream in Western Sulawesi’s mountainous interior. A team of scientists from institutions in Indonesia, Australia, and the U.S. was conducting a mammal survey of the area, and was alerted to the species’ existence by local people who use it as a talisman to protect their homes against fire.

The first specimen of Waiomys mamasae ever seen by scientists. Photo by Kevin C. Rowe.

The new species is described in the study as being small and grey, with dense fur that stands upright and can “be brushed any direction.” Its eyes are small and its snout is covered in long whiskers that may help it to detect its aquatic invertebrate prey. Its tail is also whiskered, and is long – nearly 25 percent longer than its body. On the bottoms of its toes are small, fleshy pads that may help it hold onto the streambed when hunting underwater.

Water rats occur all over the world, from Australia to South America. However, while they all possess similar aquatic adaptations, these appear to have arisen independently in many species via a process called “convergent evolution.” Indeed, the new water rat isn’t even closely related to similar-looking water rats that live on the nearby island of New Guinea. Genetic analyses indicates this new species is actually more closely related to Sulawesi’s terrestrial carnivorous rodents.

“The Sulawesi water rat and the water rats of New Guinea are no more closely related to each other than either is to the house mouse or the lab rat, but they live in similar environments, which may explain their convergent morphologies,” said Jacob Esselstyn, curator of mammals at Louisiana State University’s Museum of Natural Science, and part of the research team that discovered W. mamasae. 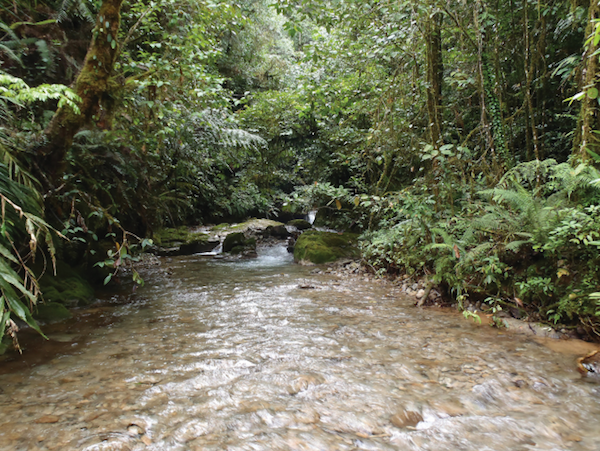 The new water rat was caught in this very stream on Mount Gandangdewata. Photo by Kevin C. Rowe.

The new water rat isn’t the only unique mammal on Sulawesi. With more than 10 million years of separation from other landmasses, the island has one of the highest concentrations of endemic fauna in the world. Thirty-one percent of its birds are found nowhere else, as are 62 percent of its mammals. Of the known mammal species, approximately 30 percent are rodents, all of which are endemic and which have evolved in many different directions to take advantage of the varied environments of the island. Among them is Paucidentomys vermidax, which eats primarily worms and has no back teeth (it’s the only known rodent without molars), and the Sulawesi giant rat (Paruromys dominator).

“Sulawesi’s ancient history of geographic isolation, along with its many high mountains help explain why it is home to so many strange animals,” said Esselstyn.

The researchers believe many more new rodent species may be hiding in the highlands of Sulawesi, which features large swaths of old-growth forest that have been left untouched by the deforestation that’s affecting much of the rest of Indonesia. The researchers attribute this to the traditional forestry practices of local communities.

“The forests near Mamasa are some of the most intact on Sulawesi,” said Anang Achmadi, a scientist at Museum Zoologicum Bogoriense in Indonesia and co-author of the study. “Their excellent condition is a testament to the Mamasan people, who limit clearing of forests to the base of the mountain.”

The researchers named the new species Waiomys mamasae to honor the contributions of the Mamasan communities who helped bring the water rat to the attention of the scientific world, as well as protecting its habitat. 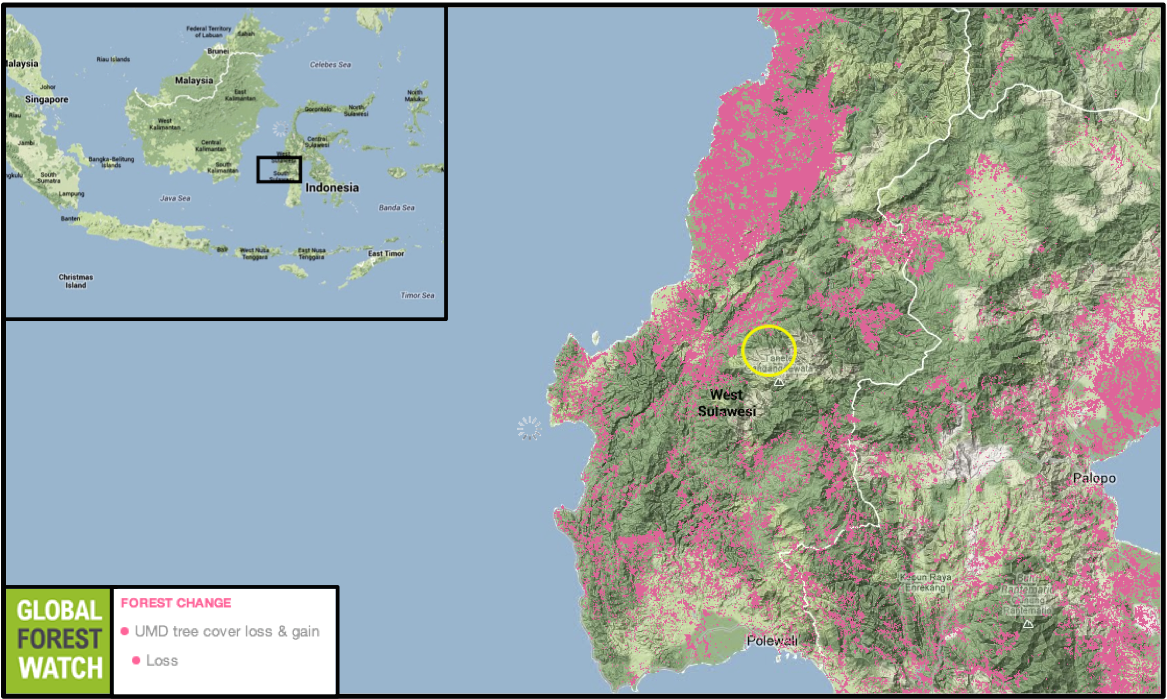 While Sulawesi hasn’t been as heavily deforested as many other parts of Indonesia, it is still losing its forest cover at a rapid clip. The area where W. mamasae was found, indicated by the yellow circle, has not been systematically surveyed but may be targeted by mining companies in the future. Map courtesy of Global Forest Watch.Click to enlarge.

However, danger looms for the region as it contains high-value mineral deposits attractive to mining companies. In addition, human habitation is increasing inward from the coast as populations rise, and logging is already felling large swaths of lowland forest. According to data from Global Forest Watch, the province of West Sulawesi, where the new water rat was found, lost more than 10 percent of its forest cover from 2001 to 2013.

Few surveys into Sulawesi’s highlands have been conducted, but the researchers say those that have been done indicate the area is very biologically important and unique, and is worthy of increased study and protection.

“The discovery of Waiomys [and other species] and their apparent absence from the relatively intensely studied areas around Lore Lindu in the east-central region, lend further support to the biogeographic significance of the west-central highlands of Sulawesi’s central core,” the authors write.

“However, the persistence of these forests, despite their remoteness, is uncertain, particularly because of the high mineral value of the region and the expansion of development in the new province of Sulawesi Barat.”