Photo trapping is a popular technique for gathering images and information about elusive wildlife. Recently, camera traps captured the first-ever images of wild flat-headed cats (Prionailurus planiceps) in the Pasoh Forest Reserve, an unexpected find in the forestland southeast of Kuala Lumpur, according to a new report in mongabay.com’s open access journal Tropical Conservation Science.

These house cat-sized felines are so rarely seen that next to nothing is known about the species. Even though the cats seem scarce, the scientists suggest these felids may also have been ducking detection by walking underneath previously set photo traps. Conservation efforts for this feline, and other reclusive species, could be improved by placing cameras that are better tailored to species-specific locations. 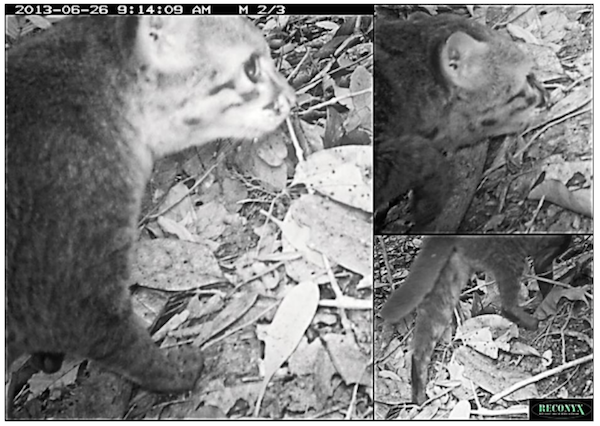 Flat-headed cats, so named for their flattened nose and muzzle, are one of the least understood species, according to the authors of the paper. Listed as Endangered on the IUCN Red List since 2008, few reliable sources on the cats’ past and present distributions are available. The last flat-headed cat was reported during a study between 1968 and 1974 when indigenous people living within the Pasoh Forest Reserve captured one of these felids.

“The conservation status of this species is currently difficult to gauge due to lack of detections, species-specific studies, or knowledge of past and current distributions,” write the researchers.

Although scientists think the cats’ range may include Borneo, Sumatra, Peninsular Malaysia, and Thailand, sightings have been too infrequent to do more than speculate. In the Pasoh Forest Reserve, which the researchers describe as a “forested island” of approximately 140 square kilometers (55 square miles), with few year-round freshwater streams, wildlife habitats are under increasing pressure from encroaching rubber and palm oil plantations and continued logging disturbances. Flat-headed cats are also vulnerable to snares set for other small animals, collisions with road traffic, and competition from domestic cats. But with little information to go on, it’s difficult to develop useful conservation strategies.

Last year, southern pig-tailed macaques (Macaca nemestrina) contributed to conservation efforts by moving one of the research area camera traps lower to the ground and onto a less frequently used animal trail. In the new location, only 10 centimeters from the ground, the camera caught two cats “moving together during the daytime in June 2013,” according to the report. The cats were traveling only about 1.5 kilometers (one mile) away from a plantation, far from the lakes or major rivers previously thought to be their preferred habitat. 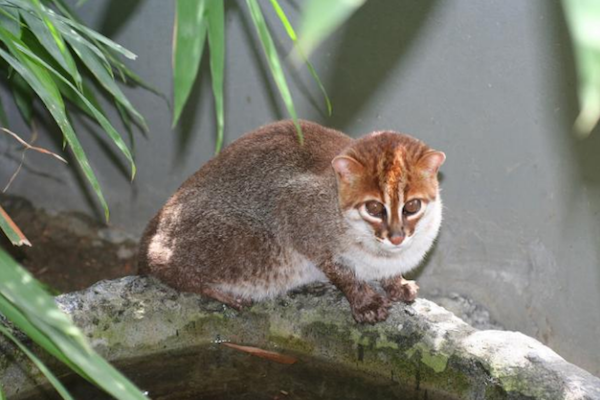 Finding the flat-headed cats so close to the palm oil plantations prevalent around the Pasoh Forest Reserve suggests these animals may be more adaptable to human presence than previously believed, say researchers. It also shows that camera placement may select against finding some species. The standard protocol of placing cameras near well-traveled trails or logging roads at a height of 30-40 centimeters (12-15 inches) may mean that many species are missing their photo opportunities.

The photo trap was part of a large-scale project conducted by the Tropical Ecology Assessment Monitoring network (TEAM), which monitors tropical vertebrate communities, tracks changes, and searches for drivers of those changes. To get images of as many species as possible, TEAM established a standardized protocol for 17 locations across Latin America, Asia, and Africa.

In the Pasoh Forest Reserve, single-camera stations were set up near animal trails and operate around the clock for thirty days. There were 457 images taken in the one-month period during which the flat-headed cat photos were captured. In total, eight species caught on camera during that time, including a monitor lizard (Varanus salvator), a rail-babbler (Eupetes macrocerus), a common tree shrew (Tupaia glis), and a long-tailed rat (Leopoldamys sabanus). Of the animals photographed, the most common were southern pig-tailed macaques, which is listed as Vulnerable by the IUCN. 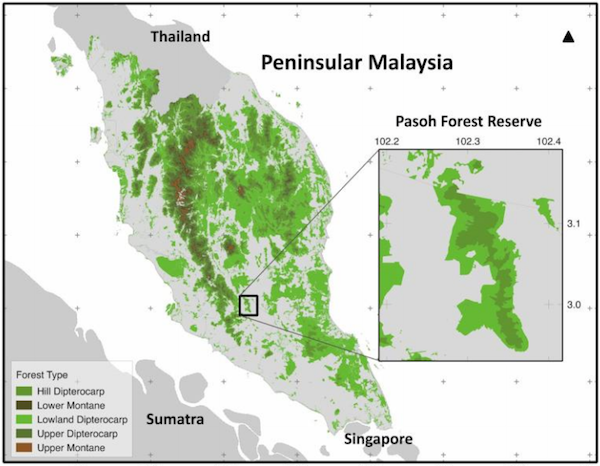 The photos were taken in Pasoh Forest Reserve, which is approximately 150 kilometers (95 miles) from Kuala Lumpur.