Timber concessions in Sumatra have high conservation value, according to report

Five industrial plantation forest concessions that supply timber to PT Asia Pulp and Paper (APP) in South Sumatra – locally known as HTI concessions – are areas of high conservation value inhabited by endangered Sumatran tigers (Panthera tigris sumatrae) and other endemic wildlife, according to a report issued at the end of March. 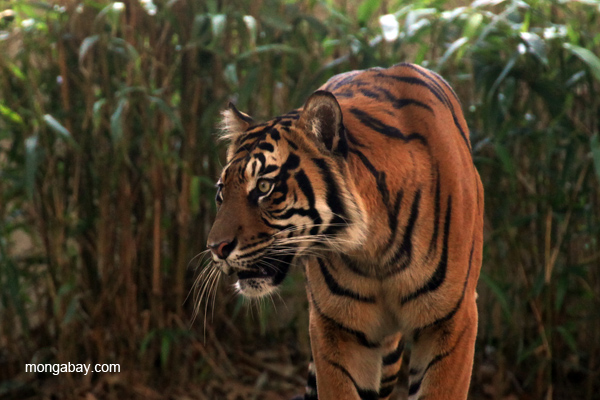 The report found many species, such as Sumatran tigers (Panthera tigris sumatrae), are living in or near the concessions. Photo by Rhett A. Butler.

The concessions of these five companies are located near protected forests, primary forests that are still pristine and intact, and national parks – BPP I near protected forest, BPP II near an ecosystem restoration area owned by PT Restorasi Ekosistem Indonesia, SHP near Sembilang National Park and areas of untouched forest, and TPJ near Sembilang National Park.

The assessment was conducted in compliance with APP’s Forest Conservation Policy, for which at least 2.6 million hectares of its 38 concessions were evaluated last year and found to have high conservation value (HCV) and high carbon stock (HCS). Besides Ekologika Consultants, other independent organizations were involved in the research, such as The Forest Trust (TFT) and Ata Marie.

Recently, APP launched another commitment to protect and restore one million hectares of forest in Indonesia, which represents an area equivalent to the total plantation area from which the company sourced pulp in 2013.

Ekologika Consultants used a variety of methods to determine whether there were at-risk species inhabiting the concessions and areas surrounding them.

“We found Sumatran tigers based on footprints, surveillance [footage] from the company and people’s [anecdotes]. But we have yet to [determine] how many there are,” said Neville Kemp, director of Ekologika Consultants. 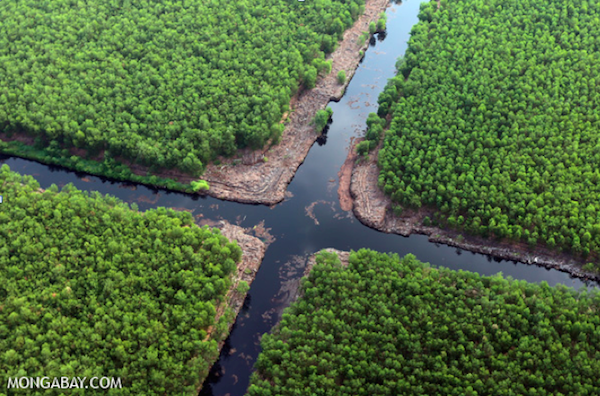 An APP concession in Sumatra. Photo by Rhett A. Butler. 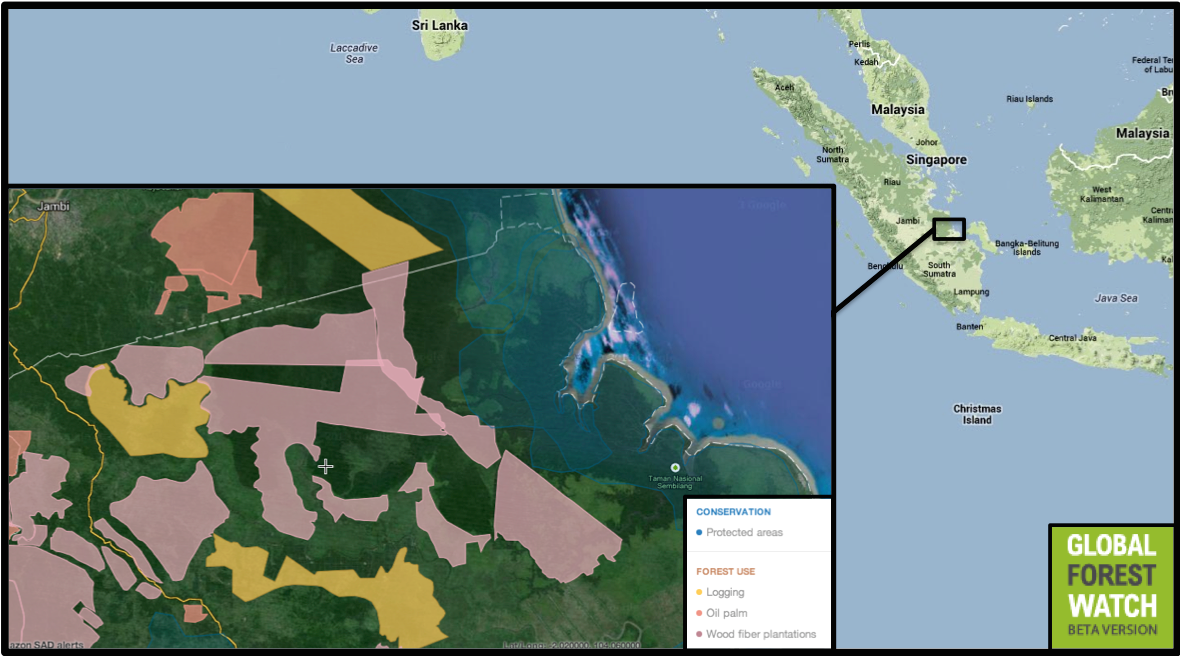 Because they are habitat for Sumatran tigers and other endemic animals, these concession areas have been given the highest-possible conservation value rating, HCV1, which is reserved for areas that contain regionally, nationally, or globally significant concentrations of biodiversity. The HCVF rating was established by the Forest Stewardship Council (FSC) in 1999.

According to data from Global Forest Watch, South Sumatra has lost more than 1.5 million hectares of forest since 2000 – in other words, more than 20 percent of its total land area was deforested over the past 13 years. Wood fiber plantations such as those of APP account for a significant portion of that loss, shrinking both wildlife habitat and constraining human communities. Protecting regions of high conservation value like those outlined in Ekologica’s report from conversion into timber plantations would not only help to preserve South Sumatra’s rich biodiversity, but reduce human conflicts in the region, as well. 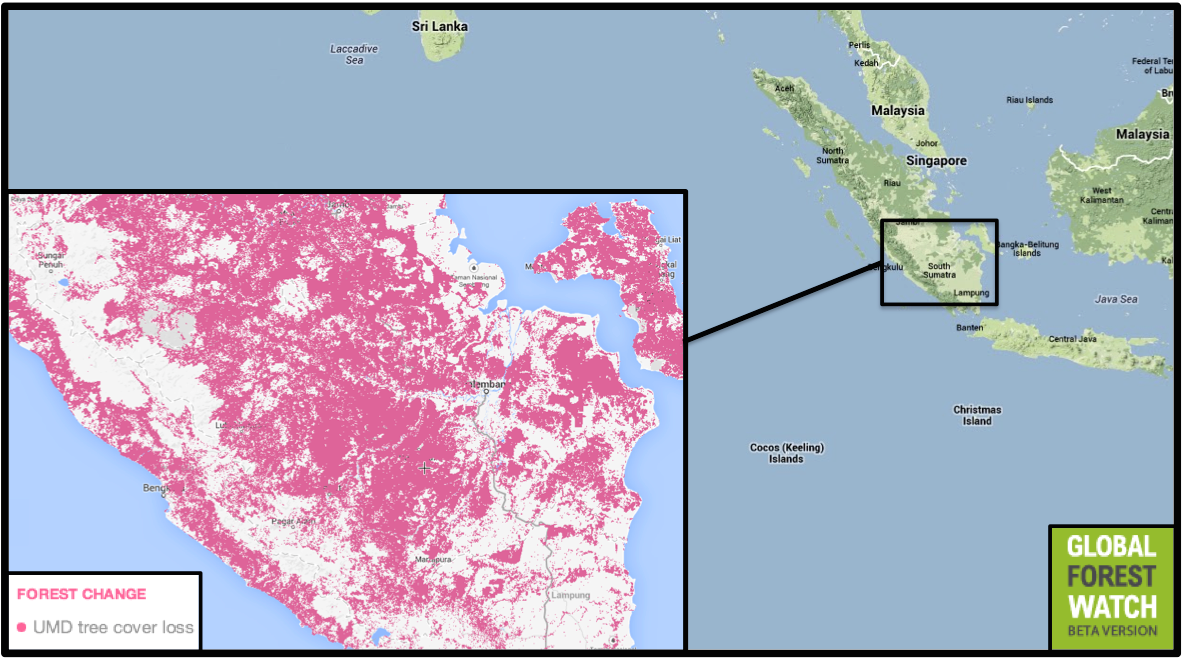 South Sumatra has lost an estimated 20 percent of its forests in the past 13 years. Courtesy of Global Forest Watch. Click to enlarge.

(05/10/2014) Environmental groups blasted a ‘lenient’ sentence imposed on the director of a palm oil company that illegally destroyed an area of endangered peat forest in Indonesia’s Aceh Province.

(05/05/2014) A few months before his administration ends, Indonesian President Susilo Bambang Yudhoyono expressed hope that his successor would be able to prolong the ban on new logging and plantation concessions he introduced in 2011. He cited the progress it has made towards more sustainable land-use practices, and subsequent benefits in environmental conditions and public health.

(05/02/2014) An initiative that aims to recognize and incentivize traditional community management of forests in Indonesia has been plagued with attempts to ‘hijack’ the program, reports the Jakarta Post.

(05/01/2014) Eleven people were arrested on April 16 by West Aceh police for allegedly killing a Sumatran elephant in a forest six kilometers away from Teupin Panah village, Kaway XVI, in the West Aceh district.