In early April, Indonesian scientists discovered an endangered freshwater fish in the Harapan rainforest of Jambi. The species had never before been observed in the region, and is declining elsewhere throughout its range.

The Harapan rainforest was the first and still-largest ecosystem restoration area established in the whole of Sumatra. It consists of lowland tropical forest at the border of Jambi and South Sumatra. The 100,000 hectares were formerly designated as timber concessions, locally known as HPH. In addition to its high biodiversity, Harapan contains several types of aquatic ecosystems, including large rivers, lakes and swamps.

Researchers from the University of Jambi conducted a year-long survey of eight rivers in the Harapan rainforest, and identified 123 freshwater fish species. Of the 123 speices, the IUCN lists 41 as Not Threatened, three as Nearly Threatened, and one as Endangered. Of the remainder, 74 have yet to be identified, and there is insufficient data to determine the status of four of the species.

“We have managed to discover a ridiangus fish (Balantiocheilos melanopterus), [also] known as “bala shark,” in the rivers of Harapan rainforest,” said Tedjo Sukmono of Jambi University, who lead the study. 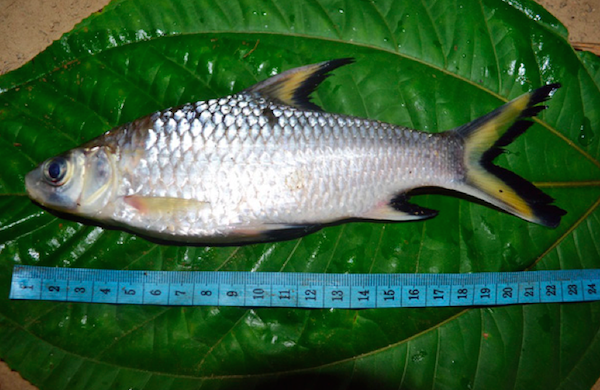 This Balantiocheilos melanopterus, also called “bala shark,” had never before been found in the Harapan rainforest. It is found in small numbers in Borneo, peninsular Malaysia, and other parts of Sumatra, and is listed as Engangered by the IUCN. Photo by Tedjo Sukmono.

Ridiangus fish, or also known as silver sharks due to their silvery color, is an endangered species famous among freshwater fish hobbyists. Their numbers have declined sharply in the wild due to the aquarium trade. Besides rivers in Sumatra, Ridiangus fish are also found in Kalimantan, Thailand, Myanmar and Malaysia.

In addition, the team also discovered 23 species that had never before been found in Jambi. One of them, the Seluang Kuring (of genus Puntius), Sukmono believes is a new species, but too little data currently exists to determine this definitively.

Furthermore, 58 species — or 47 percent — of freshwater fish found in Harapan Rainforest possess economic or food value. These include kissing gouramis ortambakang (Helostoma temmincki), lais (Kryptopterus palembangensis) and giant snakehead or toman (Channa micropeltes). Meanwhile, 39 species — 29 percent – are commercially valuable as ornamental fish, with the rest of the 123 surveyed having potential both as food and ornamental fish.

Recent research revealed that Harapan rainforest is still in good condition. However, this does not mean that the area is safe from danger. During his research, Sukmono often observed human encroachment, such as local people entering the rainforest and poisoning or electrocuting fish.

“[Poisoning and electrocution] are not environmentally friendly ways of catching fish,” Sukmono said. “It can cause pollution and overfishing. If they keep on…this way then fish habitat will soon be destroyed and populations [will be reduced].”

Forest fires also impact fish habitat, he added, as smoke affects air movement to the water, which, in turn, influence biological processes. For instance, sensitive microorganisms may die off, reducing the availability of food for fish species.

Terrestrial habitats are also at-risk due to coal road development proposed by PT Musi Mitra Jaya (MMJ), a subsidiary of Atlas Resources. The company plans to build a 18.35-kilometer (11-mile) road through the forest to accommodate increased coal truck traffic.

In 2013, the Ministry of Forestry met with PT REKI, which manages Harapan rainforest, to discuss the coal road proposal. However, PT REKI rejected the idea.

“We have sent three letters rejecting the proposal because the company can load the coal without the road,” said Surya Kusuma, Communication Manager of PT REKI.

Furthermore, he said that if the plan to build the road is realized, it will stymie natural movements of animal populations within the forest. The road would also allow increased human encroachment such as illegal logging, further threatening the Harapan rainforest.

(05/23/2014) Indonesia has become notorious for its high rate of forest loss, but there are nascent signs of progress. The central government has implemented a moratorium across some 14.5 million hectares of forest and peatlands, while a handful of Indonesian companies have adopted policies that establish social and environmental safeguards.

Timber concessions in Sumatra have high conservation value, according to report

(05/21/2014) Five industrial plantation forest concessions that supply timber to PT Asia Pulp and Paper (APP) in South Sumatra – locally known as HTI concessions – are areas of high conservation value inhabited by endangered Sumatran tigers (Panthera tigris sumatrae) and other endemic wildlife, according to a report issued at the end of March.

(05/10/2014) Environmental groups blasted a ‘lenient’ sentence imposed on the director of a palm oil company that illegally destroyed an area of endangered peat forest in Indonesia’s Aceh Province.