Pope Francis: ‘if we destroy Creation, Creation will destroy us!’

Pope Francis I, who named himself after the nature-loving Saint from Assisi, spoke about the need to safeguard creation during an audience at the Vatican last week.

“We are Custodians of Creation,” he said on Wednesday. “But when we exploit Creation we destroy the sign of God’s love for us, in destroying Creation we are saying to God: ‘I don’t like it!. This is not good!’ ‘So what do you like?’ ‘I like myself!’—Here, this is sin! Do you see?”

Pope Francis went on to say humans should not view themselves as Masters of Creation.

“Creation is not a property, which we can rule over at will; or, even less, is the property of only a few: Creation is a gift, it is a wonderful gift that God has given us, so that we care for it and we use it for the benefit of all, always with great respect and gratitude,” he said.

“Safeguard Creation,” the Pope added, “Because if we destroy Creation, Creation will destroy us! Never forget this!” He went on to note that while God forgives, creation does not.

The Pope’s championing of environmental issues echoes his predecessor, Pope Benedict XVI, who spoke often on climate change and other pressing environmental crises. Solar panels were installed on the Vatican during Benedict XVI’s reign. There are an estimated 1.2 billion Catholics worldwide; the Pope serves as the head of the Christian denomination. 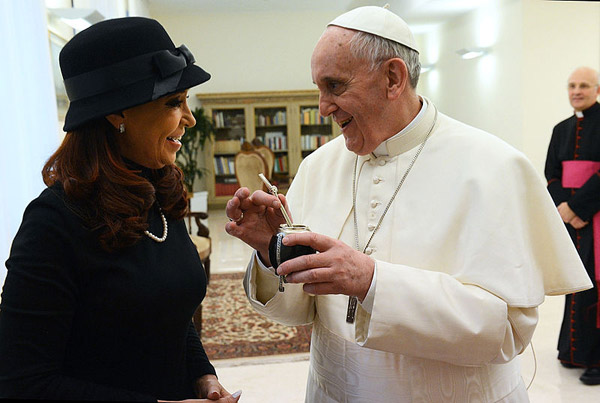 Pope Francis I meets with the president of Argentina, Cristina Fernandez de Kirchne. Photo by: Casa Rosada/Presidency of the Nation of Argentina/Creative Commons 2.0.

(03/20/2013) In his first homily as the new pope, Francis I spoke of the need to act as protectors both for the environment as well as for the poor and weak. With his focus on the environment the new pope echoes both his namesake, Saint Francis of Assisi, as well as the previous pope, Benedict XVI who championed environmental causes from climate change to biodiversity as crucial to the Catholic religion.