Although the province of Jambi is considered a “late bloomer” in terms of palm oil industry development, its rate of expansion is far from slow. Located along the eastern coast of central Sumatra, the province started to manage oil palm plantations in 1993-94 through the state-owned plantation company, PT Perkebunan Nusantara (PTPN), with the first plantations established in the sub-districts of Sungai Bahar, Bunut, and Sungai Merkanding. Along with rubber, palm oil is Jambi’s primary commodity.

To accelarate its production, then-Governor of Jambi, Zulkifli Nurdin, launched a campaign for “One Million Hectare Oil Palm Plantation Development” in 2000, a move that was slammed by conservationists for causing rapid deforestation.

Local people are finding it increasingly difficult to access the remaining areas. Regional authorities, who are more interested in gaining profits by issuing permits for oil palm plantations or timber concessions, often turn a blind eye to the rights of local people. As a result, Jambi has become a frequent newsmaker for land conflicts, such as that involving the Suku Anak Dalam tribal community. 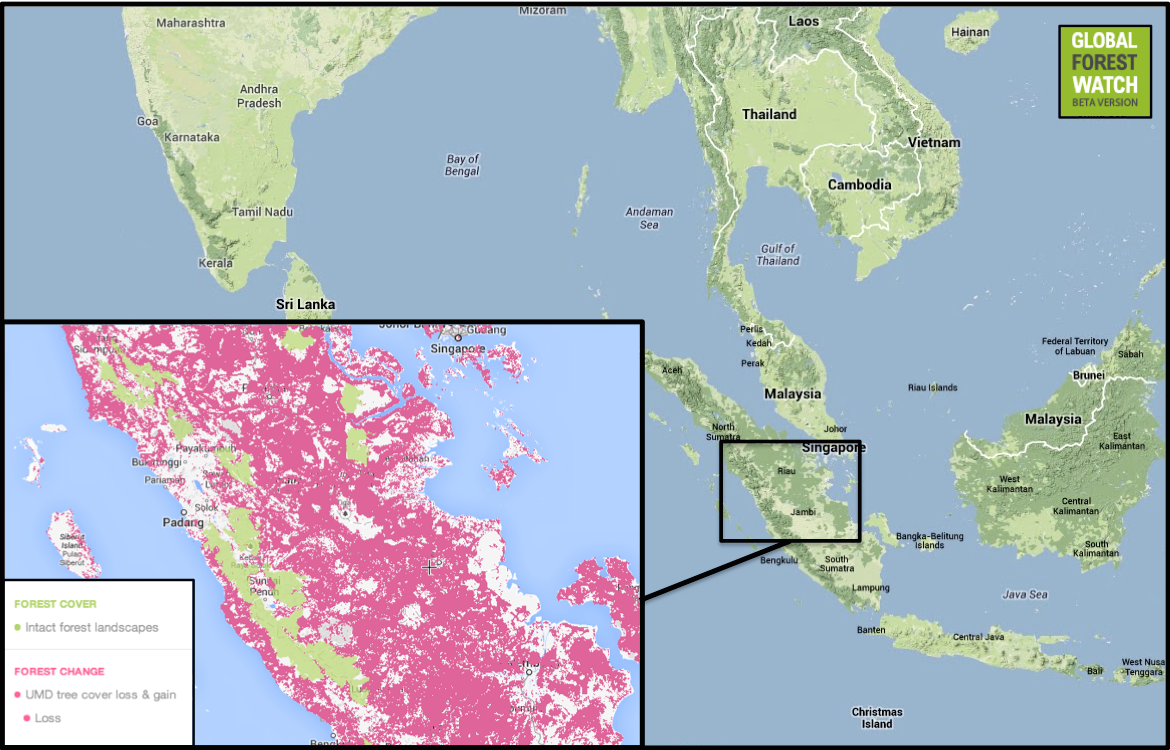 The Jambi Case: Put The Money On The Table

As in West Kalimantan, most of the land conflicts in Jambi have been complicated by political interests in determining land use. Often, “special prices” must be paid to local officials in order to obtain certain permits.

Prior to applying for permits, a company needs to supply a document, commonly called AMDAL, as proof that they have conducted an environmental impact analysis. However, many companies skip doing the actual impact analyses, opting instead to simply buy AMDAL documents, which runs approximately Rp200 million ($17,000).

“It [Rp200 million] is the market price [for AMDAL]. I have heard it many times from business people themselves,” Nauli said, adding that in practice, companies would only prepare AMDAL documents after they have obtained the location permit.

Feri Irawan of Hijau Forum, a Jambi-based NGO, argeed with Nauli, saying that companies will be freed from lengthy bureaucratic procedures if they pay up.

“There are strong suspicions of conspiracy in oil palm plantation permit issuance but it is still hard to prove because we need to catch them red-handed,” Irawan said. 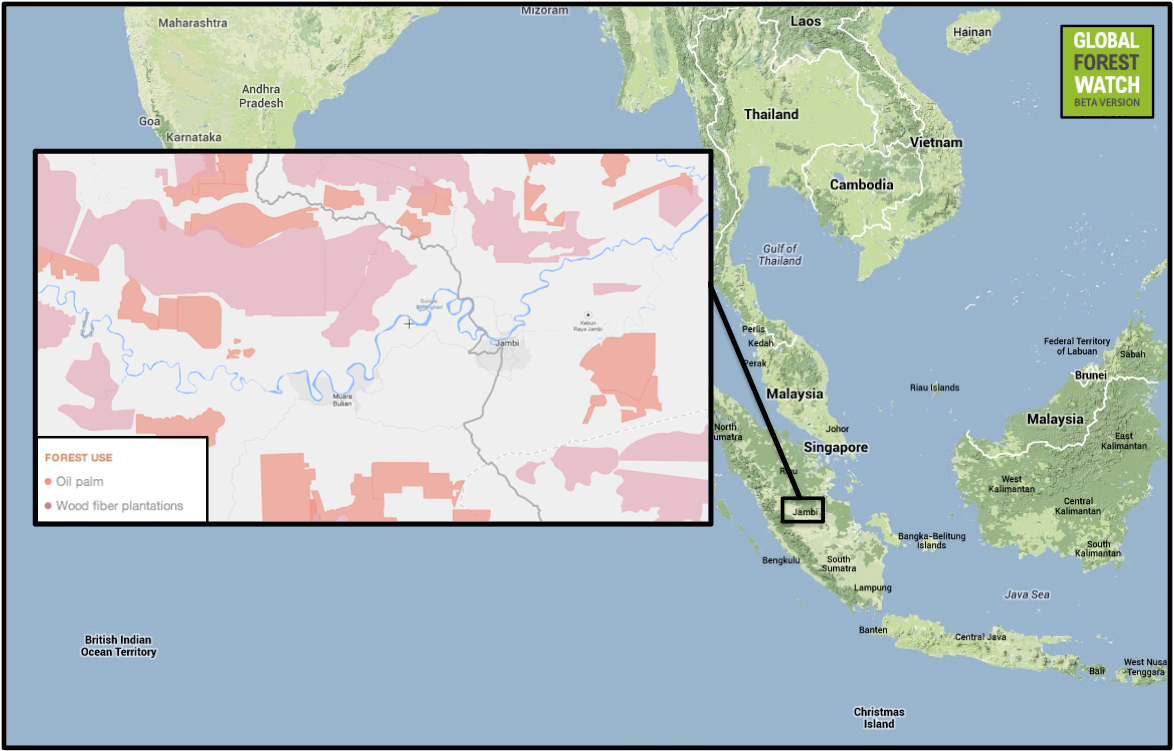 Jambi is surrounded by plantations, with only more to come in the future. Courtesy of Global Forest Watch. Click to enlarge.

In 2000, local people were promised 2,000 hectares of land in Tanjung Jabung Timur for oil palm plantations as part of the transmigration program, which moves people from densely populated areas of Indonesia to less populous regions. But in 2004, the Ministry of Forestry issued a decree to instead use that land, plus an additional 4,710 hectares, as production forest concessions for PT Wirakarya Sakti, a subsidiary of Sinarmas Group.

“The [Tanjung Jabung Timur] case started from district and provincial [government] recommendations which had ignored real conditions in the field,” Syamsiatun said.

According to Syamsiatun, companies have been launching initiatives to evict local people from their plantations without any compensation. With large-scale companies occupying their areas, the local people of Tanjung Jabung Timur are left with only 600 hectares to manage. Furthermore, Syamsiatun said that local people should have been given legal protection and measures of certainty to manage areas that have been abandoned by PT SMP.

“Because, that area was supposed to be given to transmigration community. The government should have checked the condition in the field before giving permits so there would not be any overlapping like this,” she said.

Since 1992, Jambi Scout Organization has been illegaly working together with PT Inti Indosawit Subur (IIS), a part of Asian Agri Group, to manage 400 hectares of oil palm. Because this land was listed as belonging to the scouts and not the company, IIS was exempt from obtaining a business permit, and secured only a land banking permit.

Sepdinal admitted that the Scout Organization received 30 percent of the revenue, with the remainder going to PT ISS, the managing organization of the plantation. The revenue-sharing agreement was signed in 2010.
The case is still awaiting trial at the Jambi Corruption Court. 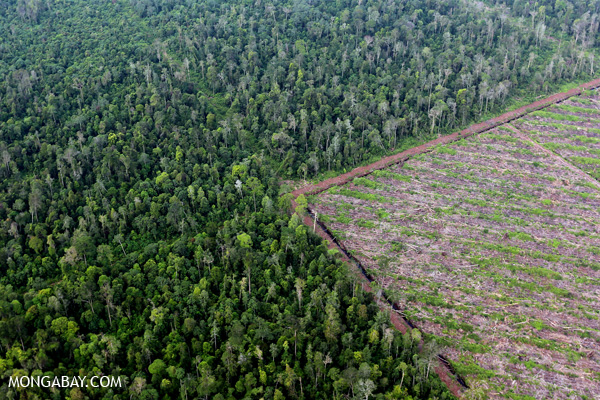 Sumatran forest is felled to make room for another plantation. Photo by Rhett A. Butler.

The oil palm plantation boom in Jambi overrides all other land-uses, especially agriculture. Massive oil palm plantation development, along with timber concessions, has reduced rice fields in Batin XXIV subdistrict, Batanghari district, from 1,300 hectares in 2008 to only 100 hectares in 2013 – a staggering 92.4 percent. But unlike rice, palm oil isn’t a source of sustenance—it is a cash crop. Therefore its expansion at the expense of rice weakens local food security.
Of the 89,813 hectares in Batin XXIV, 44,500 hectares – or nearly half – is already occupied by large scale plantation companies, such as PT PAS, Kedaton, Dhamasraya, TLS, and SDM.

Baya Zulhakim of the Setara Jambi Foundation said that non-active Batanghari Bupati, Abdul Fattah, issued a location permit granting 7,800 hectares near the village of Mersam to PT Inti Citra Agung (ICA) for oil palm plantation development. Of the 7,800 hectares, 800 are currently owned by local villagers and used as rice fields. The permit was issued in 2012, a year after Fattah had been inaugurated as Bupati.

In the same year, Fattah also issued a location permit that granted 6,000 hectares to PT Dhamasraya Palma Sejahtera — but has so far only managed to secure 500 to 700 hectares. The company used manipulative methods to procure these hectares; it assembled a team of local villagers who would try to convince other villagers to release their lands. Each actor was paid Rp550,000 ($47). In addition, village heads and community leaders received commissions of Rp100,000 ($9) for each hectare sold.

This method went smoothly in Karmeo and Jangga Alur villages where the company paid Rp3 million ($258) for wasteland, Rp4 million ($344) for idle plantations, and Rp5-6 million ($430 to $516) for productive rubber plantations. However, it did not work in Simpang Karmeo village as there was no idle land in the area.

According to Zulhakim, permits previously were granted for other types of non-forested areas, collectively known as APL, between 2005 to 2010. However, as there are no longer any APL left to buy in Batanghari, companies are instead targeting the land-holdings of local people.

“We counted that more than 50 percent of Jambi has been controlled by companies, from mining [and] timber concessions to oil palm plantations,” Zulhakim said.

The shift is both undermining local livelihoods and reducing food secuity in Jambi. It’s also increasingly tying the economic fate of people in the province to the market for a handful of commodities. When that market dips, local people have few places to turn. Unlike in the past, most can’t fall back on food crops or diverse arrays of income streams.

For now, it’s money – and those who have it – that will determine the course of Jambi’s future.

(04/24/2014) As one of the world’s largest palm oil producers, Indonesia is often at the receiving end of criticism and protests by activists, and even by its own people. Its poor forest and land management practices, which have been going on for decades, have degraded both its landscapes and its reputation.

(04/10/2014) Expanding oil palm plantations are among the top reasons for deforestation globally, along with cattle ranching, timber, and soy. However, a small palm oil production outfit recently became the first cooperative in the world to achieve Rainforest Alliance certification for sustainable growth of African palms, employing a number of innovations to ensure the prosperity of both forests and local communities.