Scientists have discovered a new species of limbless amphibians, known as caecilians, in Myanmar. Dubbing the species, the colorful ichthyophis (Ichthyophis multicolor), the researchers describe the new amphibian in a recent paper published in Zootaxa. The world’s most famous caecilian is the so-called penis snake (Atretochoana eiselti) which was rediscovered in Brazil in 2011.

Caecilians are a bizarre order of amphibians that superficially resemble snakes or earthworms, even bearing rings on their bodies that are earthworm-like. Many caecilians spend their lives under the soil, making them little-studied by researchers, yet they are widely diverse: over 10 separate families have been identified across the tropics. The caecilian genus Ichthyophis, to which the new species belongs, is the most diverse in the world.

“Although multiple species and specimens of Ichthyophis have been documented from Thailand and from Northeast India, including some recently described species, there are only a few old literature records of any caecilians from Myanmar and the caecilian fauna of that country must be considered essentially unexplored and unknown,” write the authors in the paper.

The scientists, headed by Mark Wilkinson, described the new species based on 14 specimens collected in 2000 from southern Myanmar in the Ayeyarwady Region. Although the species looks most similarly to an Indian caecilian, Ichthyophis tricolor, it differs in having more rings and a differently shaped skull. Moreover, molecular studies show the new species is more closely related to Southeast Asian species than an Indian ones, which may change how scientists view the spread of caecilians.

The researchers write that currently there is not enough data on the new species to determine if the colorful ichthyophis is threatened with extinction.

“We suggest that, as with the majority of nominal caecilian species, Ichthyophis multicolor be categorized as Data Deficient in the IUCN Red List given that we know very little about its geographic range or environmental requirements and tolerances. That specimens were found in areas of human disturbance gives some hope that they are not immediately threatened, but this depends foremost on a reasonable range size.”

In addition the researchers believe there are likely many more caecilians that remain undiscovered on the continent.

“About one quarter of the currently recognized species of Ichthyophis have been described in the last 15 years from localities throughout South and Southeast Asia, suggesting that species discovery in this group is far from complete,” the authors write.

Currently, there are around 200 described caecilian species worldwide. The largest of them all is Brazil’s penis snake. 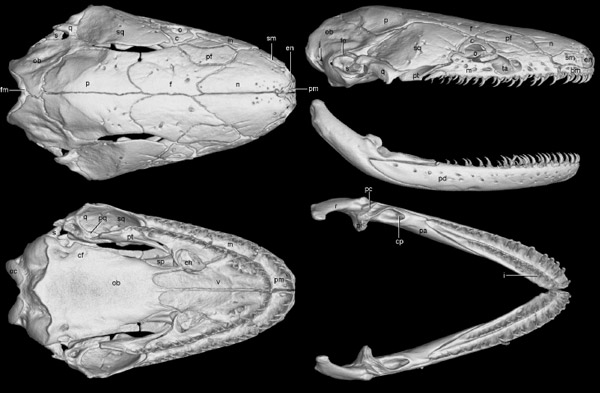