Conservation groups were jubilant in response to last month’s ruling by the International Court of Justice (ICJ) banning Japan’s long-standing “research” whaling practices in the Antarctic. However, the celebrations proved short-lived after news last week that Japan has rescinded its agreement to abide by the ruling and stop whaling altogether, opting instead to redesign its program in effort to continue whale hunts in the Southern Ocean.

Huge numbers of whales were harvested in the 19th and 20th centuries. By the 1930s, total global kills amounted to more than 50,000 animals annually, far exceeding sustainable limits. Among the most impacted species were blue whales, right whales and gray whales, which were reduced by upwards of 95 percent. To curtail population losses and reduce the risk of extinctions, the International Whaling Commission (IWC) implemented a global ban on commercial whaling in 1986. 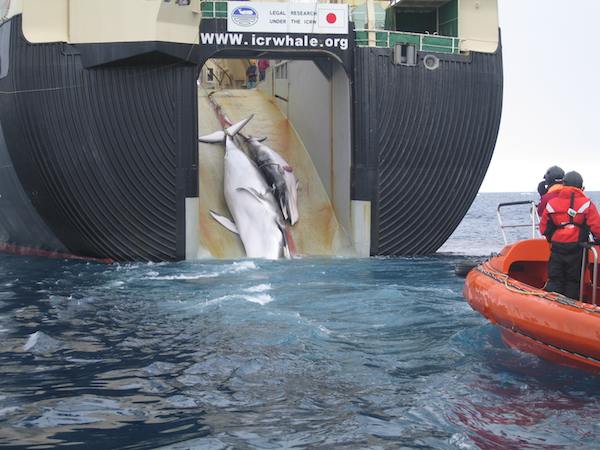 A minke whale and her one-year-old calf are dragged aboard the Nisshin Maru, a Japanese whaling vessel (2008). Photo courtesy of the Australian Customs and Border Protection Service.

However, a handful of countries objected to the ban and allowed their large-scale whaling practices to persist. Among them, Japan continued whaling for purported research purposes, reporting annual catches of 600-1,300 animals for both its North Pacific and Antarctic fleets. With the meat from harvests publicly sold in Japan, the scientific validity of these whale harvests has long been regarded as dubious by conservation organizations.

“For a long time it has been evident that ‘science’ has been abused at a breath-taking scale to justify Japan’s continued commercial hunting of protected whales and despite a heavily subsidized and ever-dwindling market for whale meat in Japan,” said Clare Perry, of the Environmental Investigation Agency.

While initially agreeing to comply with the ICJ ruling and completely end its whaling program in the Southern Ocean, Japan has since decided to change course in an attempt to take advantage of a loophole in the ruling that may still allow for harvests – if deemed sustainable.

“We will carry out extensive studies in cooperation with ministries concerned to submit a new research programme by this autumn to the International Whaling Commission (IWC), reflecting the criteria laid out in the verdict,” Hayashi Yoshimasa, minister of agriculture, forestry and fisheries, said in a statement.

Despite publishing few studies on its alleged research, Japan has long maintained that its fleets conduct hunts in order to monitor populations and determine whether or not they are large enough to support commercial harvests.

“Following this, our country will firmly maintain its basic policy of conducting whaling for research, on the basis of international law and scientific foundations, to collect scientific data necessary for the regulation of whale resources, and aim for resumption of commercial whaling,” Hayashi said.

According to a statement issued by Japan’s fisheries agency, the whaling program will be scaled back for the 2015-2016 season. Its new quotas will allow for 100 coastal minke whales (Balaenoptera bonaerensis) instead of 120, and 110 total offshore whales instead of 160. The program will no longer harvest mike whales from the deep ocean.

Japan’s new plan has attracted the ire of many in the conservation community.

“This announcement is a huge disappointment and flies in the face of the UN’s International Court of Justice ruling last month,” said Greenpeace Japan executive Director Junichi Sato. “The continued commercial hunting of whales, supposedly for research purposes will surely be challenged legally, especially when endangered species are still being targeted.”

The ICJ ruling does not affect Japan’s whaling activities – nor are any changes planned – in the northwest Pacific, where harvests are smaller but where whales are rarer than in the Southern Ocean. Its northwest fleet is expected to set sail Saturday, April 26.

(04/01/2014) Japan has harvested thousands of whales in North Pacific and Antarctic waters since the implementation of a global ban on whaling, eliciting harsh criticism from the international community. Now, in a landmark decision, the International Court of Justice (ICJ) has ruled that Japan must cease its whaling activities in the Antarctic.