Millions drink toxic arsenic in their water. This German nature lover and microbiologist says bioluminescent bacteria could light the path to safety. Interview by Nsikan Akpan.

A knob turns, and pure water streams from the faucet. In developed nations, this expectation borders on being a fundamental human right. Elsewhere in the world, tap water is a pipe dream, while finding potable groundwater can be a full-time occupation laced by lethal threats—such as arsenic contamination.

Arsenic pollutes groundwater in many countries, including Argentina, China, India, Mexico, Thailand, and parts of the United States, but the problem has reached dangerous proportions in Bangladesh. People in nearly half of this low-lying South Asian nation are regularly exposed to arsenic, according to the World Health Organization (WHO), which has described the situation as “the largest mass poisoning of a population in history.” Legions of Bangladeshis are slowly developing arsenicosis, a chronic condition typified by headaches, severe diarrhea, hair loss, and blue boils on the hands and feet. Others are stricken with cancers of the bladder, kidney, skin, or lungs.

Many residents are unaware that their wells are tainted. Microbiologist Konrad Siegfried and his colleagues at the Helmholtz Centre for Environmental Research in Leipzig, Germany, hope to solve this problem with bioluminescent bacteria and a Star Trekkian handheld sensor that measures arsenic in water. Nsikan Akpan of the University of California, Santa Cruz’s Science Communications Program, caught up with Siegfried after he discussed the biosensor at the February 2014 meeting of the American Association for the Advancement of Science in Chicago. 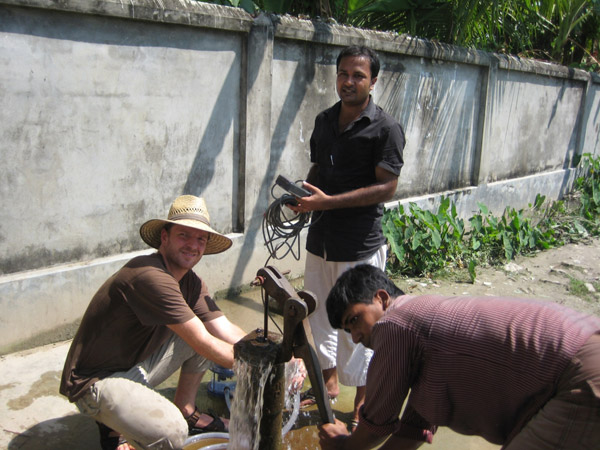 An interview with Konrad Siegfried, geographer

Nsikan Akpan: Where does arsenic in groundwater come from, and how did it become such a big problem in Bangladesh?

Konrad Siegfried: Arsenic originates from rocks that are weathering. The arsenic is transported into sediments, mostly near areas where there are big deltas. Nobody used this water before—they even called it “the water of the devil”—but the problem now is these areas [in Bangladesh] have a very high population density. So in the 1970s, people started to drill wells.

Konrad Siegfried: Before, they used pond water. For example, they had ponds for growing fish or for agriculture, then other water ponds or lakes where they did not grow crops or use pesticides. Overpopulation and overfertilization created more contamination of drinking ponds, including microbial contamination of the surface water. That created the problem. Groundwater is a good option, but in this case, in these areas…

Nsikan Akpan: … it’s not so great because of the arsenic and the sediments?

Konrad Siegfried: Yah. They have a very big water problem in the western part of Bangladesh, for example, in Khulna. It’s very low-lying; it’s very close to the sea. There is extensive pumping of groundwater from deep sources, so the salt water is coming into the land. Then they cannot use the shallow groundwater because of the arsenic.

Nsikan Akpan: How big is the problem in Bangladesh?

Nsikan Akpan: What drew you to work on this issue?

Konrad Siegfried: I’m from a small village in the middle of Germany. It’s in the mountains. As a kid, I was always in the forest and running around. I like being engaged in nature. If I go for vacation, I go hiking in the mountains. I always wanted to work with nature and in the environment.

Nsikan Akpan: But when did you start working on water quality in Bangladesh?

Konrad Siegfried: When I finished my master’s studies, my friend from Bangladesh proposed for me to come visit and do an internship there. He worked for an NGO in several fields. There was arsenic testing, but also work with irrigation, agriculture, and development. I specialized in arsenic from that time on. 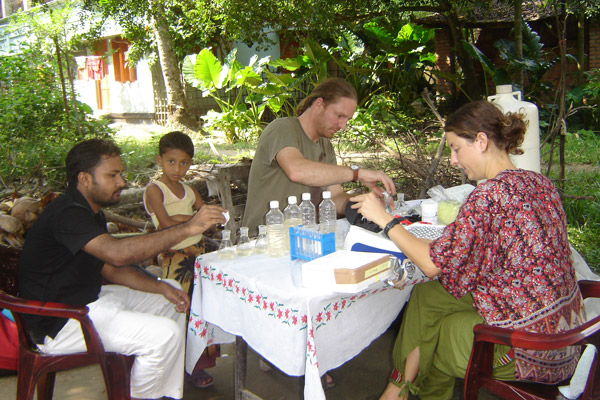 Konrad Siegfried: Yes, they developed these strains when they were at the University of Lausanne, Switzerland. They are modified strains of non-pathogenic E. coli, which have been used for a long time with microbiologic research. Similar genetically modified organisms are used to produce insulin and other medications. The strains were patented, and then Professor Harms brought the technology to our environmental research center in Leipzig.

Nsikan Akpan: The strains were created by adding luminescence genes to the E. coli?

Konrad Siegfried: They also introduced different binding sites for arsenic [to control the luminescence switch]. (Play a video showing how the system works)

Nsikan Akpan: What else did the system require?

Konrad Siegfried: Cutting out DNA from bacteria is a common procedure, but optimizing the system—this is difficult. It needed accuracy and reproducibility. We are freeze-drying these bacteria [for shipping to hot tropical climates] and are further trying to optimize their shelf life.

Nsikan Akpan: What about the handheld device that scans the tiny vials of water samples? How does that work?

Konrad Siegfried: Previously, we used a very small, robust device, but it was too expensive. The earlier model cost 4,000 Euros.

We went to the manufacturer and tried to negotiate a more cost-effective device for developing countries. During the next half-year, we will develop a cheaper one that is better to handle.

Nsikan Akpan: That’s the one shaped like a toothbrush in your presentation?

Konrad Siegfried: Yah, in the presentation, there’s a sketch of it, but they’ve already prototyped it.

Nsikan Akpan: And it can read more than luminescence and arsenic, correct?

Konrad Siegfried: It will be also usable for simple photometry, so then you can measure even more parameters, not only arsenic, but also fluoride and other water-quality parameters.

Nsikan Akpan: So the idea is you’re trying to replace the bulky field kits that were developed 30 years ago?

Konrad Siegfried: The main advantage of the biosensor is the ability to measure large numbers of samples in one day. A bigger village in Bangladesh of 5,000 people can have several hundred wells, but you can easily have 100 wells in a small town. To screen a town like that with chemical kits takes time.

Nsikan Akpan: How much time?

Konrad Siegfried: With a chemical kit, you can do 30 to 50 wells, if you’re working from the very early morning until dark, then the mosquitoes come and bite you [laughs] and you’re still testing. 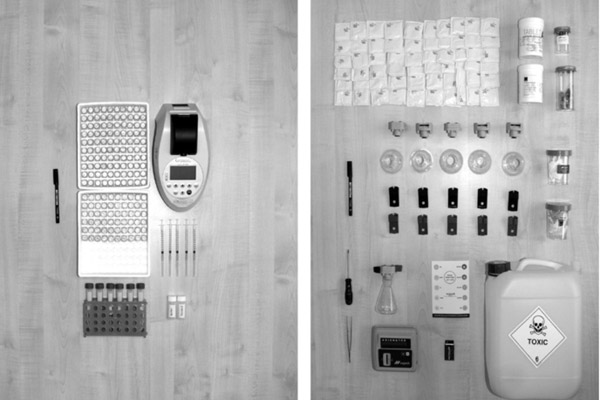 Nsikan Akpan: But ARSOlux is much faster?

Konrad Siegfried: We can do that same town within 3 hours. The difference is we incubate all of the samples at the same time. Even sometimes we don’t collect the water samples ourselves. We just tell villagers to “bring some water from your wells” and then we incubate it. We spend the rest of the day talking to people about arsenic issues

Nsikan Akpan: So the idea is for public health officials to use these devices to screen villages from time to time?

Konrad Siegfried: It’s for the government organizations and NGOs, but they could rent it to smaller agencies. Individuals could own the device, but it would still be too expensive for most in Bangladesh. But we have a new development.

Nsikan Akpan: What is it?

Nsikan Akpan: Whoa! How does it work?

Konrad Siegfried: There’s a test strip crossed by four parallel stripes. One control stripe turns blue if there is no arsenic. The other three are constructed with different biosensor strains that react at certain arsenic concentrations. One reacts at 10 micrograms per liter—the WHO standard. The next one reacts if it’s higher than 50, the third one if it’s higher than 100. You don’t even have to ask if it is less blue or more blue—it just has to be blue. It’s very easy.

We’ve already prototyped it, so we’re just looking commercialization options to bring it to the market. That would be affordable for a single user. It could be sold in small pharmacies found in most villages in Bangladesh, India, or places like Mexico, where arsenic contamination is common too.

This product uses genetically modified organisms. What safety measures are in place to keep it from entering the environment?

Konrad Siegfried: There’s a widespread fear that any genetically modified product is bad, but this is not true for our biosensor. It stays in the vial. Currently, we’re adding a drop of disinfectant to each biosensor vial after we’re finished. The day after, we transport them to the lab and autoclave all the vials, the used syringes, everything. 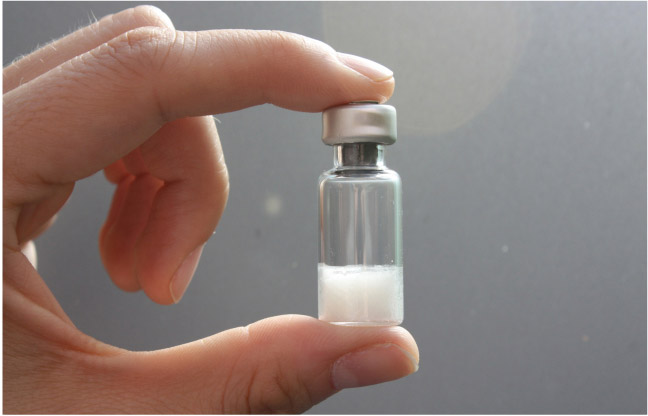 Nsikan Akpan: Is arsenic contamination a problem in Germany too?

Konrad Siegfried: There is arsenic contamination in many industrialized countries in Europe. We collect samples in the eastern Germany area, but there’s also some in Bavaria. People sometimes use arsenic-contaminated water to irrigate their gardens. That’s what I saw in the Erzgebirge Mountains or Ore Mountains in Saxony, and I told them, “maybe not so good,” because plants take it up from the soil.

Konrad Siegfried: Rice takes up arsenic, but it really depends on the crop. Some crops take it up more easily, and some not. In the rice grain, the concentration is not so high compared to the roots and shoots. This is fortunate because it’s one of the largest food products in Asia.

During your talk, you mentioned political barriers blocking wider adoption of the ARSOlux biosensor.
UNICEF did large screenings at the turn of the century, up until 2003. They screened millions of wells. Many governments say, “OK, that was enough. We know now where the problem is.”

Nsikan Akpan: But it wasn’t enough?

Konrad Siegfried: Not all of the wells were screened, plus many new wells are drilled each day. They can do it by hand, but there are small companies in villages that do it too. They use polyethylene pipe that can go down several hundred feet. It’s a very simple method.

The sediment environment is continuously changing. It would not be a problem if you had some simple test. Even here in the U.S. or in Germany, people don’t check. They think everything is OK, but there are many places in Germany that are heavily contaminated—not only with arsenic, but also uranium.

In general, there’s still much to be done. Several more areas were discovered with arsenic contamination: the Punjab area in India and Pakistan, in Bihar and the Ganges Valley in India, and in China. Intensive groundwater use leads to other dangers too, such as fluoride contamination. The chemical composition in the groundwater changes if you use it too much, so other contaminants will surface in the future.

Nsikan Akpan: What else stands in the way?

Konrad Siegfried: Another barrier in Bangladesh is the always-changing political situation. If you have contact people in the government, they could be gone next year, and then you start from the beginning.

Nsikan Akpan: That must be frustrating.

Konrad Siegfried: It’s also a sad story. My best friend, who introduced me to these water projects, died last year because of a simple tooth infection. He was 48. That’s how people in Bangladesh die. It is terrible.

is a graduate student in the Science Communication Program at the University of California, Santa Cruz. Akpan’s writing has appeared in Scientific American, Nature, Science, and The Scientist Magazine.