Scientists have discovered the gene enabling multiple female morphs that give the Common Mormon butterfly its very tongue-in-cheek name. doublesex, the gene that controls gender in insects, is also a mimicry supergene that determines diverse wing patterns in this butterfly, according to a recent study published in Nature. The study also shows that the supergene is not a cluster of closely-linked genes as postulated for nearly half a century, but a single gene controlling all the variations exhibited by the butterfly’s wings.

Thanks to a medley of shapes, sizes, colors and patterns, butterfly wing variations have helped scientists understand evolution in numerous ways. Intense predator pressures have forced butterflies to evolve different tactics to ward them off. Some butterflies have evolved to feed on toxic plants, and consequently, are inedible and toxic themselves. Predators think twice before attacking them. In response to this, palatable butterflies have developed a rather devious tactic: they imitate the wing patterns of toxic butterflies found in the region, a phenomenon known as Batesian mimicry. Usually, females of such species mimic a toxic model as they are more prone to predation than males. Sexual dimorphism (marked differences in gender) in mimetic butterflies is often a result of this, such as the Danaid eggfly female which imitates the Plain tiger.

In some cases, females of a single mimetic species imitate not one, but several toxic species. This results in multiple female forms or morphs: what scientists call polymorphism. The widespread Asian butterfly, the Common Mormon (Papilio polytes) is a perfect example of this. The male has a single non-mimetic wing pattern but the female has four forms: a non-mimetic morph that resembles the male, and three other forms that mimic the toxic butterflies in the genus Pachliopta found around them. These females mimic the colors, wing patterns and even shape of their Pachliopta models, right down to their small tail-like projections on the hindwings. 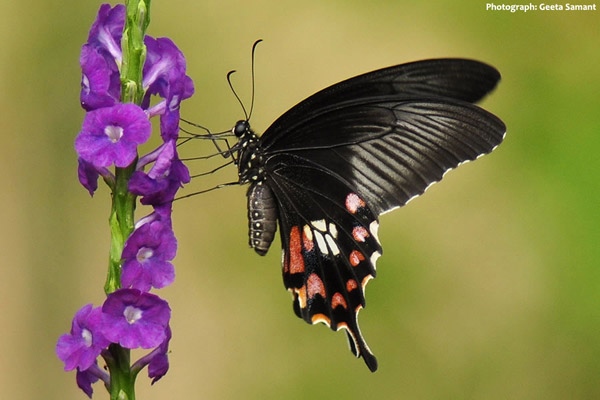 This undoubtedly impressive natural phenomenon drew the attention of geneticists in the 1960s. They speculated that alternative wing patterns are controlled by a supergene, which had to be a cluster of tightly-linked genes located near each other. These genes would control specific attributes of wing patterning such as the presence or absence of tails, color differences on the forewing and so on.

So which supergene controls the numerous wing pattern variations of the Common Mormon? What genes constitute this supergene? And how do these genes produce the mimetic morphs? These were the questions scientists Krushnamegh Kunte from the National Centre for Biological Sciences in India, Wei Zhang and Marcus Kronforst both from the University of Chicago, and their colleagues from the universities of Cornell and Boston sought to answer. They used a method called genetic mapping, a process of determining the precise position of the gene that controls a particular biological trait. This involved breeding different lineages of female morphs and studying genetic variation among them. Employing highly-specialized genetic tools and analytic tests to compare the DNA sequences and genomes of these butterflies, the scientists located five genes including doublesex that could be controlling wing pattern variation.

Surprised, the scientists conducted more tests to determine the role of doublesex in the Common Mormon. This included sequencing genomes, examining single nucleotide polymorphisms and genome-wide association studies – some of the most modern methods that have been developed to examine genetic variations and analyze the associations between them. Interestingly, doublesex turned out to be the primary gene associated with mimetic wing patterns, pointing to the pivotal role of the gene in mimicry.

“The co-option of this well-known sexual differentiation gene in controlling polymorphic mimicry was indeed an unexpected and exciting discovery,” said Kunte.

But how does doublesex double as a gender differentiator and a mimicry generator? The scientists discovered that doublesex is a hotspot of molecular evolution: dozens of very minute genetic changes or mutations in the regions that make proteins and thousands of mutations in other regions of this gene distinguished the mimetic morph from the other. The team found that the answer also lay in the proteins that doublesex can concoct. A single gene can perform different functions if it makes different proteins. The scientists found that doublesex did manufacture different proteins in males and females, which were expressed at varying intensities in the mimetic and non-mimetic forms. They also simulated structures of the doublesex proteins in mimetic and non-mimetic female forms and found them to be substantially different.

“Differences in protein structure and gene expression among the female forms play a role in making doublesex the ultimate mimicry gene,” said Zhang.

However, such differences can be lost during recombination, the usual shuffling of genetic variation at the time of sexual reproduction. When the scientists re-examined their vast genomic and mapping datasets, they discovered that recombination was prevented exactly at the location of doublesex. Based on such reduced recombination and single gene control, the authors argue that a mimicry supergene can be a set of numerous closely-linked mutations in a single gene and not necessarily a cluster of several tightly-linked genes as theorized for the past half century.

“It would be intriguing to know exactly what those parts are, how they function, how they contribute individually and together to the full ‘integrated’ phenotype (the mimicry pattern). And importantly, how this can have evolved,” said scientist Mathieu Joron of the Institut de Systématique, Evolution et Biodiversité, Centre National de la Recherche Scientifique in France. “I think this study is really beautiful.”

“This paper is an instant classic in evolutionary genomics,” adds Lawrence Gilbert, professor at the University of Texas at Austin. “Not only is this a novel discovery in mimicry genetics, it is important in understanding the multitude of ways that genotypes determine phenotypes in the course of development.”

The authors are however, modest.

“Recent advances in DNA sequencing technology have really opened up these classic examples of adaptation to detailed molecular investigation,” said Kronforst. With skill and technology on their side, the scientists are hoping to answer many of the intriguing questions that have emerged, including exploring the ecological factors that give rise to the specific genetic architecture of wing patterns. “This is a long road, but an exciting one,” said Kunte.

How “insect soup” might change the face of conservation

(01/23/2014) Much of what we know about patterns of biodiversity has come from extensive fieldwork, with expert researchers sampling and identifying species in a process that takes thousands of man-hours. But new technologies may revolutionize this process, allowing us to monitor changes in biodiversity at speeds and scales unimaginable just a decade ago.

Giant clams are easy to recognize, but genetics proves there is more than meets the eye

(12/21/2013) Giant clams are among the more easily spotted invertebrates of the marine realm. However, some are actually quite cryptic and distinct species are often difficult to identify, claims a study recently published in PlosOne. Much attention has been focused on charismatic species in research, but the scientists who authored the study argue that giant clams also deserve the spotlight because of the potential threats and present misunderstandings regarding their taxonimical classifications.

(06/05/2013) When deciding whether or not to clear a patch of rainforest land for development, scientists are often called in to quantify how many different species exist there. But determining the number of rare and threatened species living in a section of jungle isn’t easy. If they are very rare, the individual members of the species will be hard to find; if the area being surveyed is along a steep slope it may be difficult to access the area; if there are lots of species to identify, you might need to hire a dream team of biologists—each specialized within a different area of biodiversity—and that can get expensive. However a new study in the Proceedings of the Royal Society Journal by an international group of scientists suggests a more cost-effective and efficient way to rapidly assess local biodiversity.