The humid tropical forests of northwestern South America boast over 140 different palm species (Arecaceae), yet the people who dwell underneath these green canopies and the knowledge they posses remain relatively unknown to modern science. But Rodrigo Cámara-Leret of the Autonomous University of Madrid and his team of researchers are working to change that by documenting and preserving the traditional knowledge of palms before it is forgotten and lost forever. With support from the Palm Harvest Impacts in Tropical Forests project (PALMS), the researchers were able to delve into the tropical forests of Colombia, Ecuador, Peru, and Bolivia to visit remote rainforest communities where they observed largely-untouched traditional cultures. Their findings—from three tropical forest ecoregions including the Amazon, Andes, and Chocó–are published in recent paper in PLOS ONE.

Palms play an integral part of everyday life in the Amerindian, Mestizo, and Afro-American traditional cultures. In the Chocó region, roots from the açai palm (Euterpe precatoria) are used for dozens of different medicinal remedies. One of the most common and well-known uses of palms (Lepidocaryum tenue) in the Colombian and Peruvian Amazon is for traditional roof thatching on single homes and the traditional maloca, or roundhouse. The Macuna people of the Apaporis River in the Colombian Amazon still continue to hunt with blowguns made from the stems of palms (Iriartella setigera). 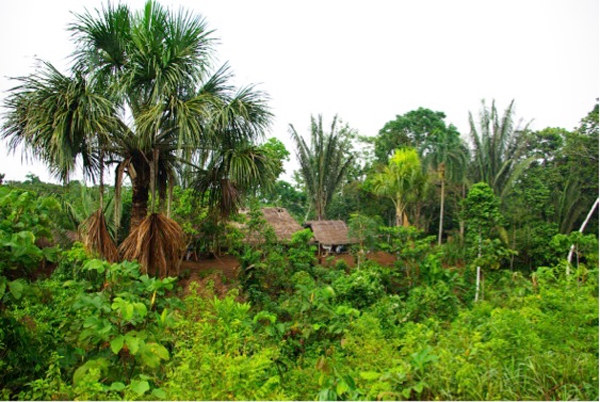 “On one occasion a young Macuna left the roundhouse in the evening,” an excited Cámara-Leret told mongabay.com, “and an hour later returned with his blowgun in one hand, and to our astonishment, a toucan in the other.”

Palms also serve as cultural focal points for traditional ceremonies and dances that bring together hundreds of people from different communities. For instance, the harvest of the palm fruit chontaduro (Bactris gasipae), commonly used year-round in juice preparation, involves one of the Amazon’s most complex harvest festivals. Once a year, when the fruits are ready to harvest in February, hundreds of Indians from the Colombian Amazon come together to celebrate the three-day-long harvest festival and dance ritual called the “baile de muñeco.” While traditional uses of palms play a dominant role in indigenous cultures, traditional knowledge of palms could also benefit the global community, according to scientists.

“Indigenous knowledge on palms can bring potential advancement to medicine, food security and agricultural practices,” said Cámara-Leret. “However, indigenous knowledge holders should be fairly compensated when their knowledge is accessed and when commercial research takes place in their communities.” 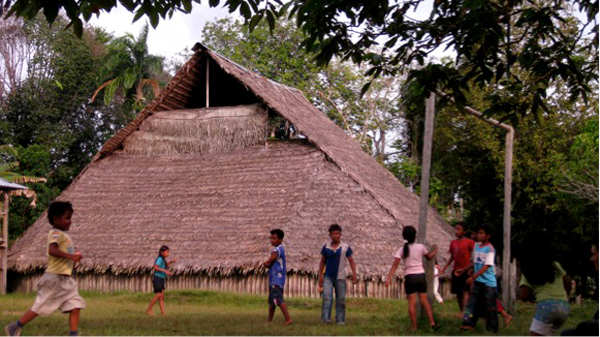 The roof of this traditional roundhouse in the Colombian Amazon is thatched with the pui palm (Lepidocaryum tenue). Photo credit: Rodrigo Cámara-Leret

In an effort to conserve traditional palm culture, the research team conducted an 18-month-long trek during which they visited a total of 68 Amerindian, Mestizo, and Afro-American communities residing in the Amazon, Andes, and Chocó rainforests. Through an extensive 2,201 interviews with community members, the researchers recorded 2,262 palm uses for construction, food, tools, medicine, and cultural purposes. After cross-examining their results with ethnobotanical palm literature from the past 60 years, the researchers found significant information gaps between the existing literature and the new information discovered during their interviews. The gaps in palm ethnobotanical literature represent not only the potential loss of traditional knowledge, but also the loss of knowledge that could provide important information for biodiversity and ecosystem management.

Photo of a remote community that is two-day journey upriver from the nearest market, in the middle of the Chocó region in Colombia. Photo credit: Rodrigo Cámara-Leret

Indigenous knowledge, once ridiculed as archaic, is now gaining increasingly more respect and sometimes incorporated into biodiversity conservation management projects. Two decades ago, the Convention on Biological Diversity (CBD) international treaty was created to preserve traditional knowledge in relation to biodiversity conservation and to promote the use and sharing of benefits arising from traditional knowledge. Today the Intergovernmental Platform on Biodiversity and Ecosystem Services (IPBES) plans to include indigenous knowledge into its conceptual framework and assessments. However, despite organized efforts to preserve traditional knowledge, many traditional practices and lifestyles are being abandoned or forgotten as a result of globalization.

“Some indigenous knowledge about palms and about useful plants will certainly be lost in the coming decades and many have already fallen out of practice,” said Cámara-Leret, “Some of the well-known threats to indigenous knowledge include changes in indigenous settlement patterns, the entrance of western medicine, and a shift from traditional to market economies.”

A photo of illegally operating gold mining boats in the Caquetá river in the Colombian Amazon. Photo Credit: Rodrigo Cámara-Leret

With the introduction of modern cultures, many indigenous people are leaving the rainforests and moving to cities in search of jobs. A major threat to traditional cultures is the enticement of working for illegal gold mining operations, specifically in the Caquetá region of Colombia. Many indigenous people leave their families and traditional agriculture fields to work on boats used by illegal gold mining ventures. As a result, food security is threatened by a shortage of crops, forcing them to become dependent on an imbalanced diet of rice and expensive imported canned goods from Peru, according to the researchers. Many women are leaving their communities to work in the kitchens on these boats or turn to prostitution. Additionally, health and environmental issues are mounting due to mercury pollution from these gold mines.

Despite all of these factors that threaten the existence of indigenous palm knowledge, there is hope for future preservation of traditional lifestyles in the South American rainforests. Other countries, like India, are actively conserving indigenous knowledge by involving local communities in the collection of traditional customs through organized programs such as a people’s biodiversity register. Cámara-Leret hopes a similar program will be implemented in South America where traditional knowledge is rapidly disappearing.

(02/20/2014) World Resources Institute (WRI) today announced the release of a tool that promises to revolutionize forest monitoring. The platform, called Global Forest Watch and developed over several years with more than 40 partners, draws from a rich array of big data related to the word’s forests and translates it into interactive maps and charts that reveal trends in deforestation, forest recovery, and industrial forestry expansion. Global Forest Watch is the first tool to monitors global forests on a monthly basis, allowing authorities and conservationists to potentially take action against deforestation as it is occurring.

(02/17/2014) Palm oil giant Wilmar has refuted a claim that it will stop buying crude palm oil from the Malaysian state of Sarawak due to its new ‘no deforestation’ policy.

(02/12/2014) Despite a sharp drop in the price of palm oil since 2011, premiums for certificates representing palm oil produced under the Roundtable on Sustainable Palm Oil (RSPO) standard have risen due to increased demand for greener palm kernel oil (CPKO), reveals data released by GreenPalm.

(02/05/2014) Versatile is the best way to describe the reddish brown fruit born from oil palm trees. Both the flesh and seed of the fruit is used in many applications including cooking, cosmetics, and biofuel. In addition, the fruit is composed of 50 percent oil, making it a highly efficient product that requires less land than other oil producing crops.