Worldwide, this January was the fourth warmest since record-keeping began, according to new data released by National Oceanic and Atmospheric Administration (NOAA). While parts of the world, most notably eastern North America and northern Russia, experienced temperatures well-below average, overall the month was a scorcher. In fact, another dataset, from NASA’s Goddard Institute for Space Studies (GISS), that uses different methodology, found that January was the third warmest since record keeping began.

According to NOAA, global temperatures were 0.65 degrees Celsius (1.17 degrees Fahrenheit) above the 20th Century average. Some parts of the world experienced remarkably warm weather including Alaska, western Canada, Greenland, Mongolia, southern Russia, and northern China. Most of Africa, Europe, and Australia also experienced above average temperatures for the month.

Global warming due to burning fossil fuels has caused temperatures to rise around 0.85 degrees Celsius since record-keeping in the 1880s. In fact, the Earth hasn’t experience a below average year since 1976 and, even more amazingly, this January was the 347th month in a row that was above the 20th Century average. And things may be even hotter than NASA and NOAA currently report. Recent research argues that temperature data gaps in the Arctic sea has led to scientists underestimating the rate of warming occurring worldwide. 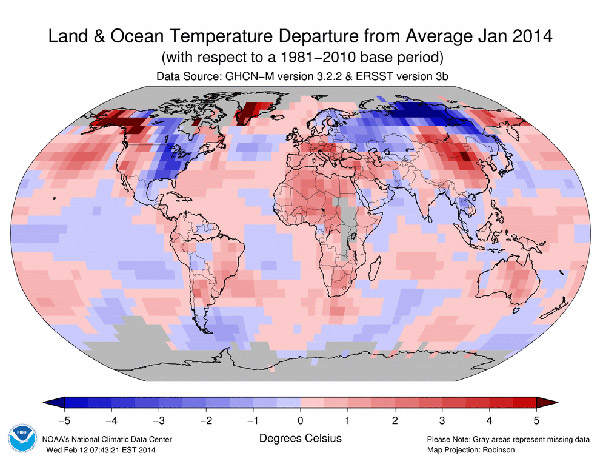 Temperature anomalies for January 2014 as compared to averages from 1981-2010. Map courtesy of NOAA. Click to enlarge.

January was also renowned for unusual jet stream patterns that led to the so-called “polar vortex” which brought Arctic temperatures down to parts of the U.S. and led to the UK undergoing its wettest winter month on record. Some scientists have argued that observed changes in the jet stream may be linked to melting ice cover in the Arctic, although there is no consensus on this yet. Where scientists agree is that the Earth is warming and greenhouse gas emissions are the culprit.

Epic flooding in the UK has pushed a new round of dialogue over what the government is doing–or not doing–about the issue of climate change, and indeed whether or not the flooding was exacerbated by climate change (warmer oceans means more precipitation). Criticism of the government, pushed Prime Minister, David Cameron, to say this week, “I believe man-made climate change is one of the most serious threats that this country and this world faces.”