Wonderful Creatures: A nematode drama played out in a millipede’s gut

Nematodes are typically small animals that to the naked eye look very much alike; however, these creatures are fantastically diverse —on a par with the arthropods in terms of species diversity.

At face value, nematodes lack the charisma of larger animals, so there are very few biologists who have made it their life’s work to understand them. Those who do have been rewarded with a glimpse of the incredible diversity of these animals, an example of which is the complex menagerie of nematodes that dwell in the guts of large, tropical millipedes.

The scanning electron microscope (SEM) images of the four species (see the first four images) show just how morphologically diverse the millipede-gut nematodes can be, but it’s their ecology that is really fascinating. These four species are parasitic in the gut of their millipede hosts where they help themselves to gut secretions, intestinal cells and the host’s food. Nothing odd about that—there are loads of nematodes species that spend their lives in the guts of larger animals. What makes this example particularly fascinating is that these nematodes are not alone. The gut of the host is also home to other, related nematodes (Zalophora spp.) that pursue and eat the parasitic species (see the last image below).

What I love about this example is what it says about hidden diversity and the huge variety of ecological interactions that are out of sight and out of mind. The gut of the millipede host is a microcosm—an ecosystem in its own right—inhabited not only by a huge range of microorganisms, but also an array of other animals that are found nowhere else. Beyond the basic predator-prey interactions played out between these nematodes there remains much that we have no idea about. Does each of the parasitic species depend on a different part of the host’s gut? What adaptations do the parasitic nematodes have for evading the predatory nematodes? Can the juvenile predatory nematodes maximize their chances of getting into a millipede infested with their prey?

These hidden layers of complexity are everywhere in the living world, so it is no surprise that we have so far only scratched the surface of the Earth’s biodiversity. 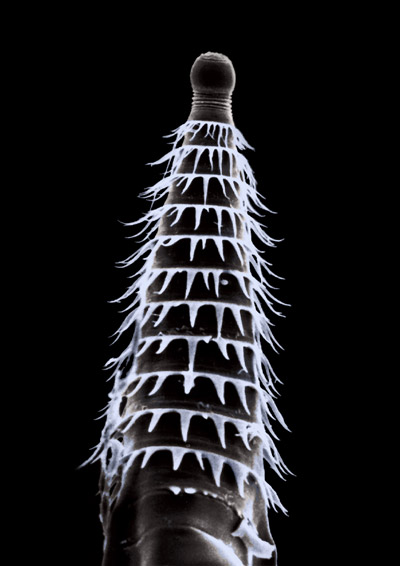 A female parasitic nematode in the Carnoya genus that also lives in the gut of tropical millipedes. Photo by: David J. Hunt (false colored SEM). 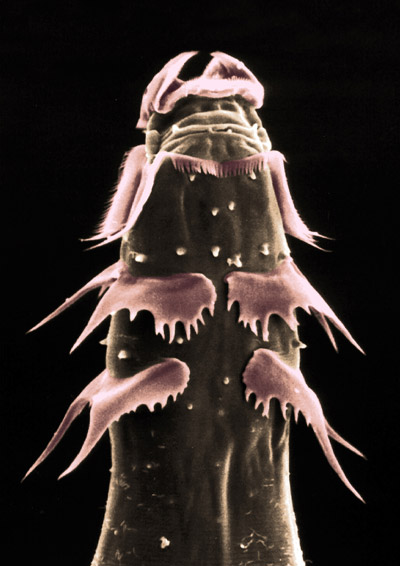 A parasitic nematode in the Heth genus. This one is found in millipedes’ guts in Papua New Guinea. Photo by: David J. Hunt (false colored SEM). 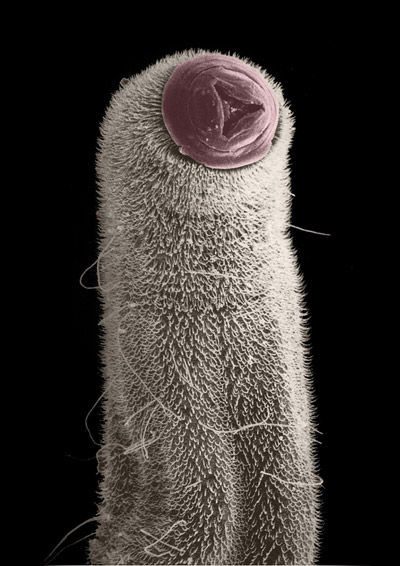 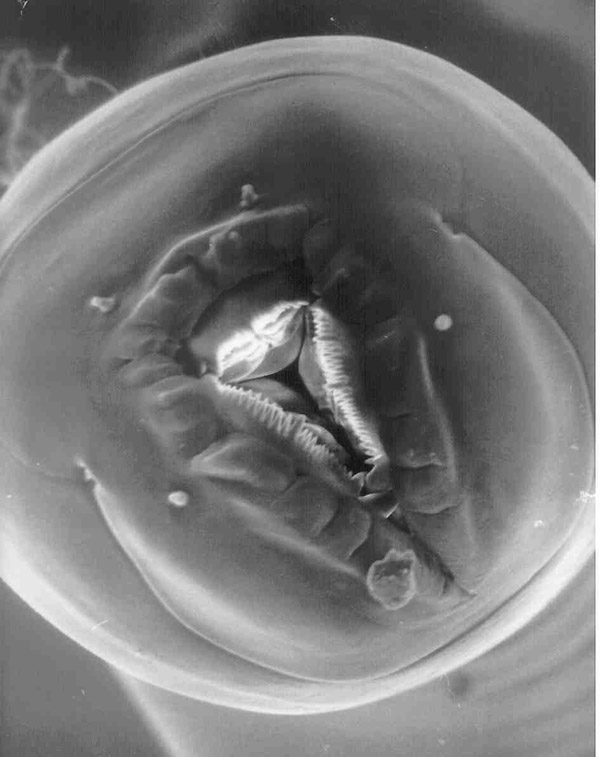 The mouth of Zalophora deinostoma. The three jaw-like structures inside the mouth slice up the prey nematodes that are hunted in the gut of the millipede host. SEM image courtesy of David J. Hunt.

(01/10/2014) Rove beetles are among the most diverse animals on the planet, with around 56,000 species currently described. Amongst this multitude of species is a dazzling array of adaptations perhaps best illustrated by the genus Stenus. These beetles, with their bulbous eyes and slender bodies are often found near water running swiftly over the wet ground and clambering among the vegetation.