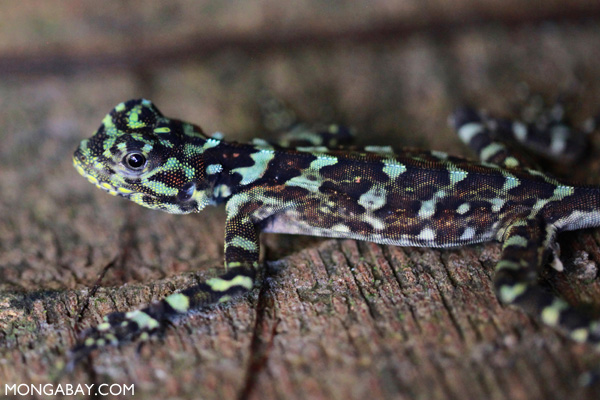 Collared treerunner in Colombia. Photo by Rhett A. Butler

Now, that’s a horse of a different color. Or, in this case, a lizard of another species—four species.

“The four new species described here all appear to be associated with areas of endemism or specific features of the northern South American landscape,” write John Murphy of Chicago’s Field Museum of Natural History and Michael Jowers of the Estación Biológica de Doñana in Spain in their article published in ZooKeys.

Collared treerunners were originally described in 1758. Since then, populations hailing from the Amazon Basin to Trinidad and Tobago have been tagged one and the same—a single species.
The researchers assessed both morphological and genetic features of collared treerunners, and found disparities implying that Plica plica is more than one species. Scale rows on their backs were used as one such indicator. Lizards from Trinidad had, on average, 110-125 rows, while those from the middle Orinoco region in Colombia and Venezuela had 180-202 rows. These row counts differ from the lizard considered the original species of collared treerunner, which has 126-140 rows.

The variation can be attributed to population isolations due to geographical barriers. After separating, the populations inbred and certain morphological and genetic characteristics became more or less pronounced, eventually spawning a new species.

While recent estimates tallied the total number of species on Earth at 8.7 million, the specific number is ever-fluctuating, as is evidenced by this study. But revealing hidden species such as those within the collared treerunner group can contribute to our greater understanding of the complexities of life on Earth.

“The discovery and description of cryptic species gives us a better understanding of evolution and makes people aware that the diversity of life is greater than what we currently think it is,” said Murphy. “It is probably possible to at least double or triple the number of squamate [snakes and lizards] reptiles known today.”