Australia had its warmest year on record, with annual temperatures 1.2 degrees Celsius (2.16 degrees Fahrenheit) above the 1961-1990 average, according to a new analysis from Australia’s Bureau of Meteorology (BOM). This is 0.5 degrees Celsius higher than the previous warmest year on record—2005—for Australia. Global warming due to burning fossil fuels is increasing temperatures worldwide.

“The Australian region warming is very similar to that seen at the global scale, and the past year emphasizes that the warming trend continues,” the BOM writes. “As summarized in the recent Intergovernmental Panel on Climate Change (IPCC) Fifth Assessment Report, recent warming trends have been dominated by the influence of increasing greenhouse gases and the enhanced greenhouse effect.”

In addition to being the warmest year on record for the country, 2013 also saw the warmest summer and springs in Australia. January 7th, 2013, was the warmest day yet recorded in Australia with an average maximum of 40.3 degrees Celsius (104.5 degrees Fahrenheit).

Despite the impact of climate change on the country, Australia’s new government under Tony Abbott has recently attacked the country’s climate policies, including its carbon tax. In addition to pledging to abolish the tax, the Abbott administration has already abolished an independent advisory committee on climate change and drastically cut renewable energy funding. The Abbott administration has also thrown massive support behind new coal mining projects, including new ports that environmentalists say could devastate the already-ailing Great Barrier Reef. 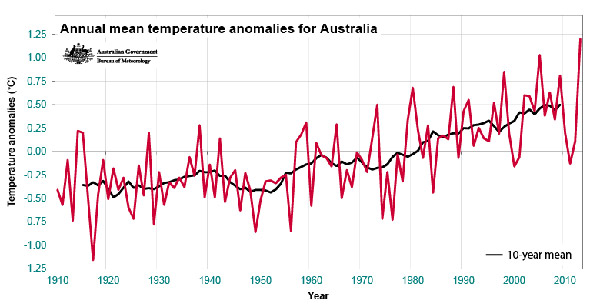 In response to the news from BOM, the head of the Green party in Australia, Richard Di Natale, called Abbott a “reckless ideologue who ignores the science and is intent on listening to people who are part of the tinfoil hat brigade.”

While Abbott has expressed doubts about climate science in the past, he recently stated that he accepts the reality of anthropogenic climate change. But many remain skeptical.

Last week, Australia was sweltering under another heatwave: temperatures in the interior hit over 50 degrees Celsius (122 degrees Fahrenheit).

(12/18/2013) Last month was the warmest November on record, according to new analysis from the NOAA. Temperatures were 0.78 degrees Celsius (1.40 degrees Fahrenheit) above the average November in the 20th Century. Global temperatures are on the rise due to climate change caused primarily by burning fossil fuels, but also by deforestation and land-use change.