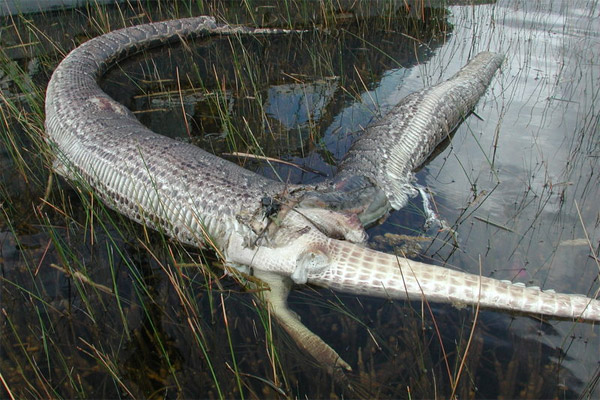 Burmese Python dead after attempting to eat an alligator in Florida in 2005. The Burmese python is an invasive species in the Everglades where it causes widespread problems, including feasting on native animals. Photo by Michael Barron

A security guard at a hotel in Bali was killed after he tried to catch a 13-foot-long (4m) python, reports Agence France-Presse (AFP).

The guard, Ambar Arianto Mulyo, was patrolling the grounds of the five-star Bali Hyatt in Sanur when the incident occurred. AFP explains what happened next: “Mulyo, 59, gripped its head with his right hand and its tail with his left — but the snake proved too strong, managing to wrap itself around his neck and strangle him.”

Although Mulyo was accompanied by other men, they were afraid to help, according to Gusti Ngurah Yudistira, the head of the police criminal investigations unit covering the Sanur area.

“The victim died on the spot as his neck was crushed and he could not breathe,” he was quoted as saying. “We urge residents and tourists to stay on the alert.”

Jamie Zimmerman Rothfeld, a spokeswoman for the Bali Hyatt, told CNN that the attack happened “on the roadway outside of the hotel’s property.” The beachfront hotel is under renovation and closed until 2015 so no guests were present at the resort..

“The management team and hotel associates of Bali Hyatt express their sincere condolences to the family of the victim of the python attack,” said Rothfeld. 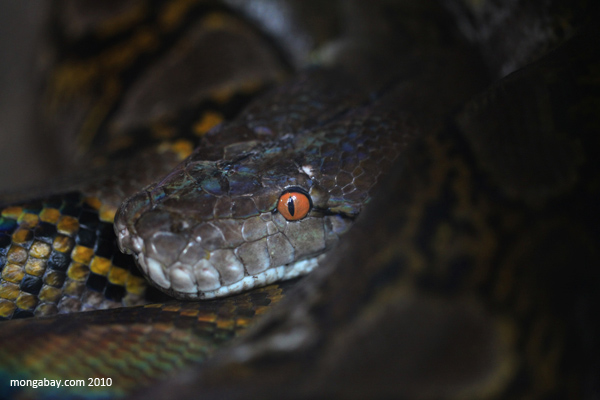 Pythons are native to Bali, but it wasn’t immediately clear what species was involved. The island is home to the Burmese python, one of the world’s largest and heaviest snakes.

Unprovoked attacks on humans by pythons are exceedingly rare. Experts advise those without proper training to avoid handling wild snakes.