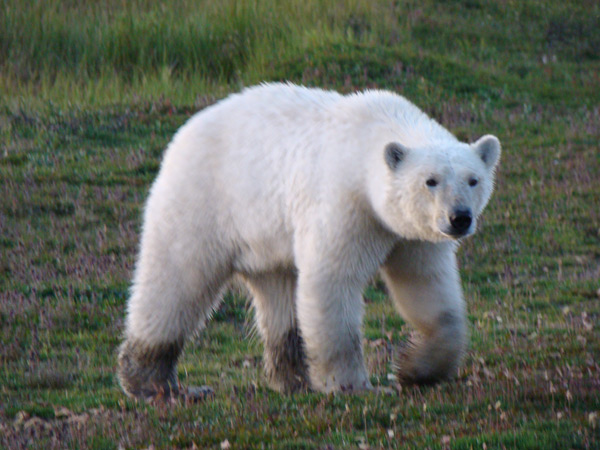 A polar bear plods through summer mud in the Hudson Bay Lowlands. Photo by: Jon Sweetman.

The mighty polar bear has long been the poster child for the effects of global warming in the Arctic, but the microscopic diatom tells an equally powerful story.

Diatoms are a type of algae that form the base of the food chain in watery habitats the world over. Disturbances among lake diatoms have exposed the impacts of rapid warming in the Hudson Bay Lowlands of eastern Canada, researchers reported Oct. 9 in the Proceedings of the Royal Society B. 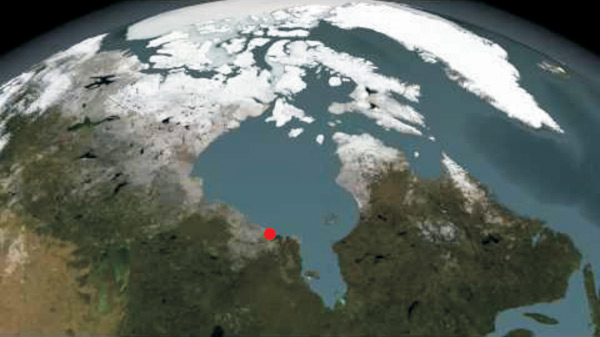 While other parts of the Arctic began to thaw in the 19th century, the Hudson Bay Lowlands remained stable until about 15 years ago. Since then, the region’s average temperatures have shot up three degrees Celsius.

To gauge the effects of this warming on lowland ecosystems, ecologist John Smol and his team at Queen’s University in Ontario extracted sediment cores from four lakes. Like the rings of a tree trunk, a sediment core is a repository of lake history—a physical record of the dead creatures and other debris that descend to the lake bottom each year. The 30-centimeter-deep cores, encapsulating 200 years of lake history, were littered with intact glass-like diatom shells.

Diatoms preserved in lake sediments are sensitive environmental indicators. As the lowlands warmed up, the researchers found, different diatom varieties began to thrive, including more species that float throughout the water column, rather than sticking to the lake bottom. Distinct temperature layers within the lakes arise as winter ice thins, triggering changes among the diatoms, the scientists believe.

Like an ice bath holding a bottle of champagne, the frozen bay chilled the lowlands for thousands of years, explained ecologist Warwick Vincent of Université Laval in Quebec, who was not part of the study. Once the ice bath began to melt, though, the period of winter ice cover shortened with each passing year. The bay and its lowlands started to lose their cool, further shrinking the ice season in a chain reaction of warming.

On the eastern side of Hudson Bay, Vincent has studied pollen in soil cores to track changes in tree species and has witnessed similar patterns. “You see it’s very, very constant through the millennia, until you get to the 1990s. Then everything changes,” he said.

Milder lake waters have allowed new diatom species to prosper, yielding more energy for the whole food chain. “With climate change, there are winners and losers,” said Smol in an interview with mongabay.com. “There might be more food for other things. But too much algae can also change the lake cycle so there’s less oxygen in the water.”

In this vast expanse of peat bogs, permafrost and polar bears, changes in diatom communities confirm that warming is altering lake ecosystems, Kathleen Rühland, the study’s lead author, told mongabay.com. The area is home to native Cree people, who struggle to adjust to a new reality. “It’s changing the way they move around the landscape. Their ways of getting to traditional hunting and fishing grounds are unpredictable now,” Rühland said.

As the lowlands start to look more like temperate ecosystems, we can learn from the transformation, said David Barber, a sea ice specialist at the University of Manitoba: “We need to pay attention so we can arm ourselves for the adaptation and mitigation that are going to be required in the more southerly parts of our world.” 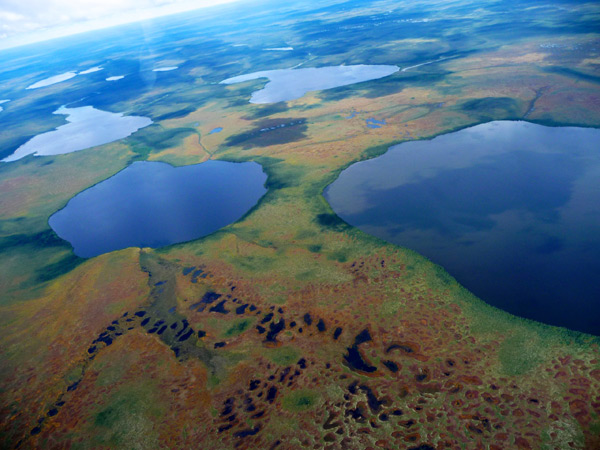 Aerial view of lakes in the Hudson Bay Lowlands. Photo by: Kathleen Rühland. 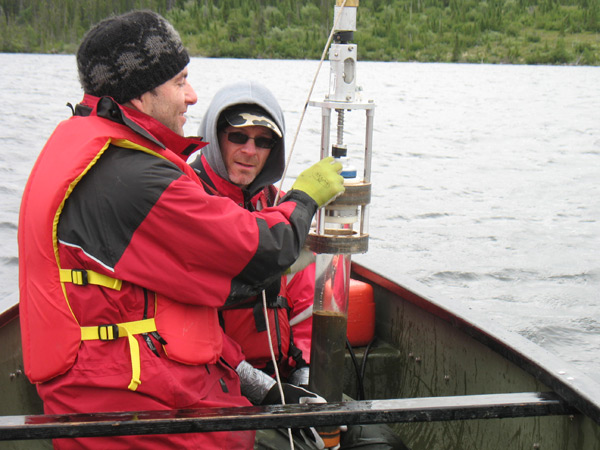