Scientists’ beef with land use decisions 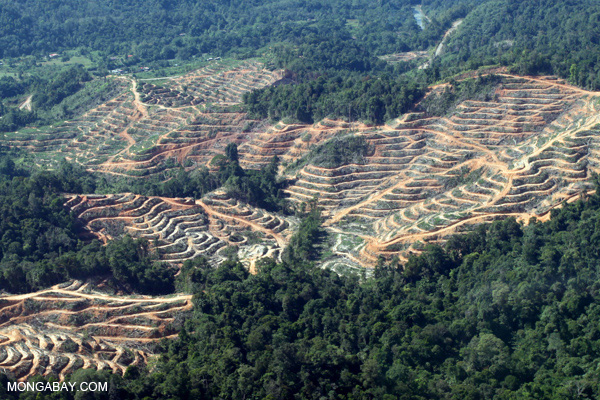 Clearing of rainforest in Malaysian Borneo for oil palm plantations.

When food goes to the garbage can instead of someone’s stomach, it is easy to see a wasted opportunity. The resources used to grow and transport that apple or hamburger went to the landfill. The Union of Concerned Scientists (UCS) is bringing another, less visible, form of food waste to the table, the waste created by eating foods that are inefficient to produce, like beef.

“In terms of the most wasteful, inefficient food, beef is a chief offender. Beef might be what’s for dinner, but it shouldn’t be,” said Doug Boucher, director of UCS’s Tropical Forest and Climate Initiative. “Replacing beef with chicken, eggs, pork and milk will greatly reduce the amount of land needed to raise these products and eliminate some of the wastefulness present within the global food system.”

Boucher is an author of the UCS’s recently released “Climate-Friendly Land Use: Paths and policies toward a less wasteful planet,” available online. The report targets food production, forest harvest, and biofuels as areas where major improvements in efficiency are possible. The suggested improvements, the report says, would both improve human health and reduce the human threat to Earth’s climate.

The report points to beef as a particularly wasteful choice because it requires orders of magnitude more land to produce and releases many more greenhouse gases in the process. The easiest way to avoid this inefficiency? Choose chicken.

“We find that shifting meat consumption from beef to chicken not only reduces grain needs and global warming emissions but also makes land available for reforestation, which takes carbon dioxide out of the atmosphere and reduces global warming even further,” the report reads.

UCS’s report describes several areas, like biofuel and palm oil production, where waste via inefficient production and consumption can be reduced as well as the policies would encourage more efficient choices.

“The waste and increases in harmful climate change emissions due to agriculture can no longer be accepted as the cost of doing business. We cannot continue to waste food, cut down forests and spew additional carbon emissions into the atmosphere without regard for the future impacts of these actions,” said Boucher. “The solutions are staring us in the face. All we must do is act.”