A dolphin swimming through the world’s oceans after fish, and a bat flying through the air with its membranous wings to catch insects or eat fruit: at first glance, it looks like no two creatures could be more different. But it turns out they share a superpower – they hunt prey by emitting high-pitched sounds and listening for a returning echo. A recent study published in the journal Nature Letters has shown that the regions of the genome responsible for this ability are strikingly similar between these very different mammals.

This superpower is called echolocation. The bottlenose dolphin, for example, emits as many as 1,000 clicks per second at a frequency beyond human hearing. Sound waves bounce off different surfaces in the environment, and the returning echoes provides information about the object from which it bounced. By determining the amount of time it takes for a reflected sound to return, echolocating species are able to orient themselves in their environments.

Biologists call the fact that this behavior is seen in both bats and cetaceans (marine mammals such as whales and dolphins) convergent evolution, i.e. when distantly related species look similar, or show the same behavioral traits. Previously, the predominant hypothesis held that species follow fundamentally different pathways to arrive at these similar traits. For example, wings are used for flight in birds, insects and bats; but the parts of the genome that code for wing formation vary tremendously between these groups. However, this study is an eye opener – it has, for the first time, found convergent similarity between two very unrelated groups at the genetic level.

I hear you, I see you

While both bats and dolphins use ecolocation to hunt down prey, patterns of echolocation vary greatly among species. Depending on what they eat and where they live, species produce sounds at different frequencies – from “broadband” calls that encompass a wide range of frequencies, to constant-frequency calls emitted at one particular frequency.

Researchers from the UK, Italy and Denmark got together to look for genetic evidence of convergent evolution between these very different groups. Previous research had already determined which genes are involved in echolocation in both dolphin and bat species. While, other studies have shown that different bat species have undergone changes that resulted in strong similarities in the genes that govern hearing. These findings set the stage for Joe Parker, Georgia Tsagkogeorga and others to begin examining the entire genomes of selected echolocating species. They undertook whole genome sequencing of four very different bat species, including echolocating species (like the greater horseshoe bat), and non-echolocating species (like the flying fox). To their own data, they added previously published data regarding species such as the bottlenose dolphin, dog, horse, cow, mouse and human – literally every complete mammal genome they could lay their hands on. They ended up with the genomic sequences of 22 mammals – the largest comparative study of this nature. 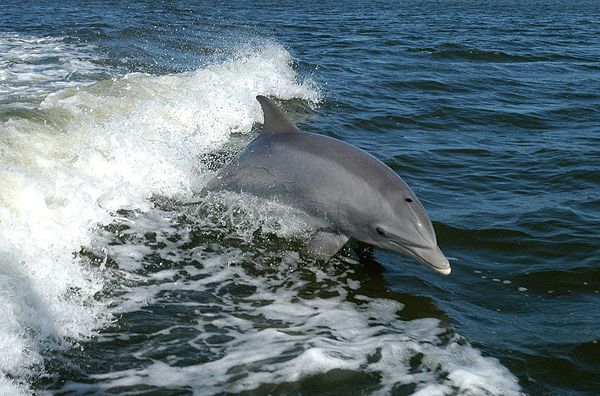 A bottlenose dolphin (Tursiops truncatus) breaching in a wake. Photo in the public domain provided by NASA.

The researchers aligned the entire genomes with each other, and pulled out more than 2,300 genes that are shared by all of the compared species. They then evaluated how similar the gene sequences were across these species. Ultimately, they found evidence of convergence in almost 200 regions of bat and cetacean genomes. Given how different these two groups are, this number is huge – far more than the researchers expected.

Among the 200 convergent regions, seven were involved in hearing. These seven regions were a lot more similar to each other than to other genes, and they were more similar than scientist’s would expect by chance alone. In addition to genes that control hearing, four genes involved in vision were also convergent in bats and dolphins. Researchers attribute this to the fact that both groups have shifted their vision spectrum to adapt to living in low-light conditions.

The amazing similarity in genetic sequences between such different species demonstrates the immense role adaptation plays in shaping an organism’s evolutionary trajectory. Evolution is well-known as the process by which different species form, and scientists have long-known that evolution can result in the appearance of similar traits in wildly-different animals. But now the researchers have pinpointed, for the first time, that convergent evolution can also mean genetic similarities in animals separated by wholly opposite habitats and more than 60 million years.