by Photo Essay Amoghavarsha on 25 October 2013

The Nilgiris, also known as the “Blue mountains,” in southern India are an extraordinary mountain range that form one of the most diverse biospheres in the country, the Nilgiri Biosphere. And the Nagarhole National Park, declared a tiger reserve in 1999 is part of this biosphere.

The Kabini River flows through the National park and is the lifeline to a wide variety of flora and fauna. This river transforms Nagarhole into a water world of wonder. 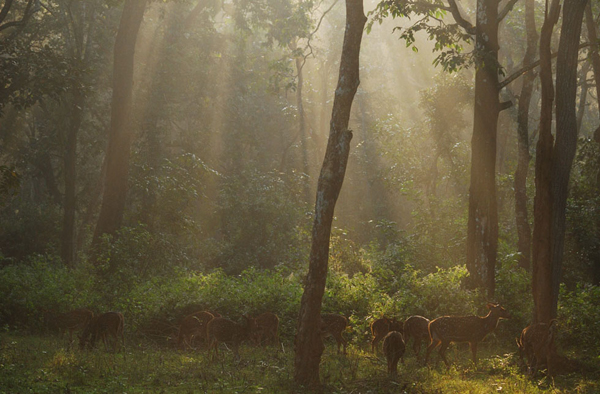 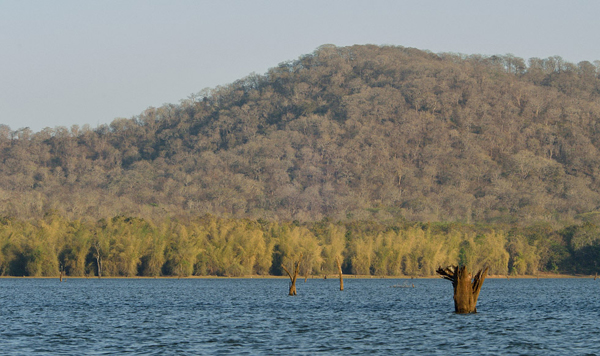 The Kabini River flows from the state of Kerala into Karnataka, while doing so it passes through one of the most pristine wildlife reserves in the country. This forest patch has been famous for its wildlife for ages. The area served as prime hunting grounds for the Maharajas of Mysore along with Kings and Emperors from other nations. The oldest photograph of hunting dates back to 1891, that of the Grand Duke of Russia. 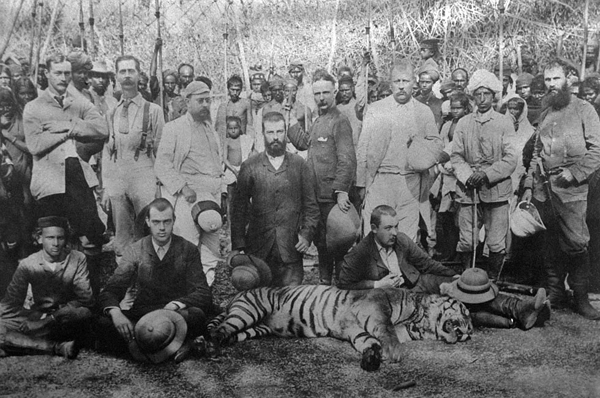 The river and its surrounding forests have also been known for their Khedda operations, where trained mahouts drove wild Asian elephants (Elephas maximus) into stockade traps known as Kheddas for domestication. Seen here is the Khedda operation of 1913. 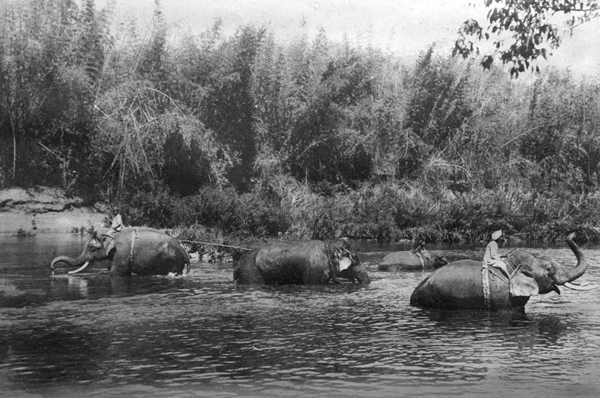 In 1974, a dam was built near Beechanahalli village, submerging parts of the national park and also creating a very unique habitat. It was around the same time that this area was also declared a national park. 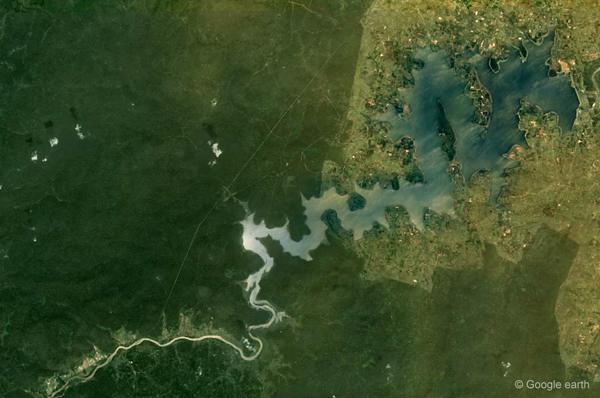 During the summer, the waterholes inside the forest dry up, but the Kabini reservoir retains water even during peak summer. This brings herds of elephants and other animals in search of water to the backwaters of the reservoir. Elephants congregate in such large numbers here that it is said to be one of the largest groupings of Asiatic elephants in the world. 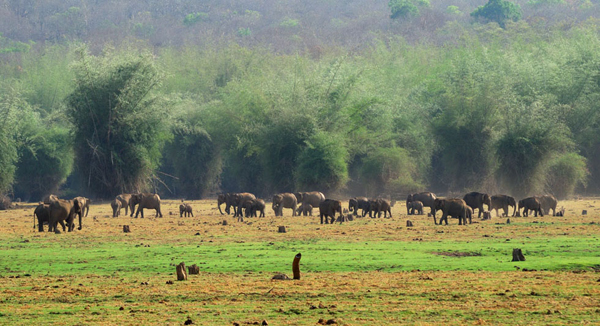 The banks of the Kabini River are lush with grass throughout the year. Water along with fresh green grass brings not just elephants but other herbivores like spotted deer (Axis axis) and Indian gaurs (Bos gaurus). The congregation of animals and the beautiful habitat makes this one of the most popular national parks in the country. 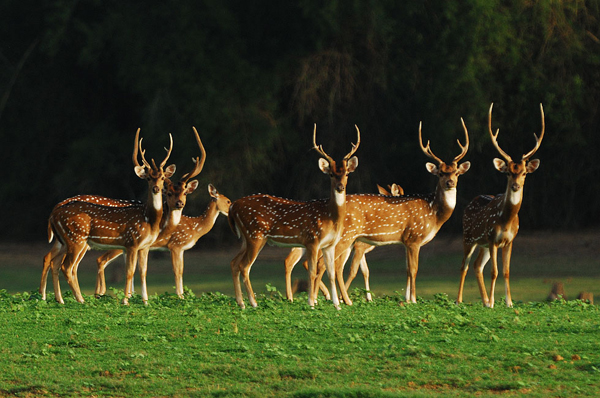 The banks are also relatively safe to raise the young ones. Elephant and gaur calves spend joyful days in the open without fear, making it one of the few places in India where one gets to see such a variety of animals in the open. 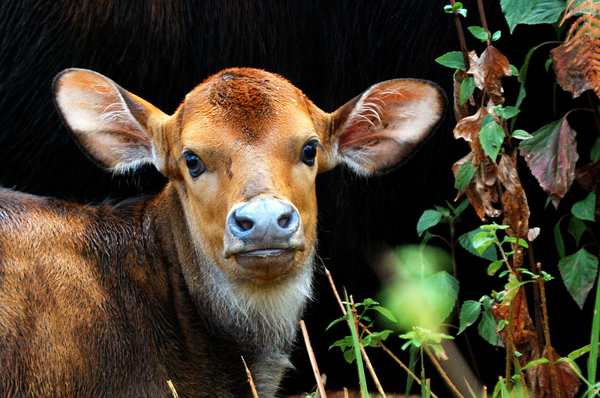 But being out in the open has its challenges: a mother elephant kicks mud onto herself and her calf to protect from the harsh sun and pesky insects. 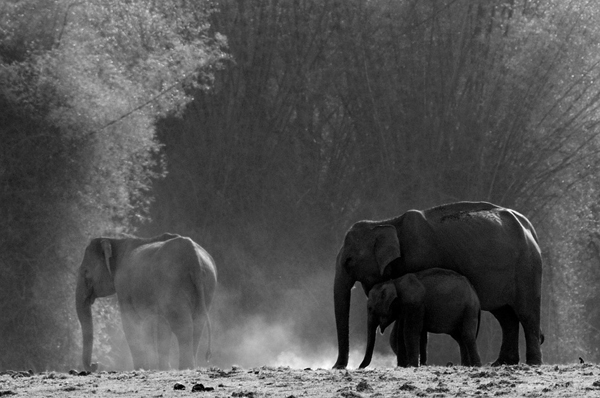 This large congregation also brings predators in search of easy prey. One such stealth predator is the leopard (Panthera pardus). The leopard spends a large part of the day on trees and comes down mostly for hunting. Their excellent camouflaging skills coupled with their silent ghost like movements make them one of the most successful ambush predators in the thick jungles. 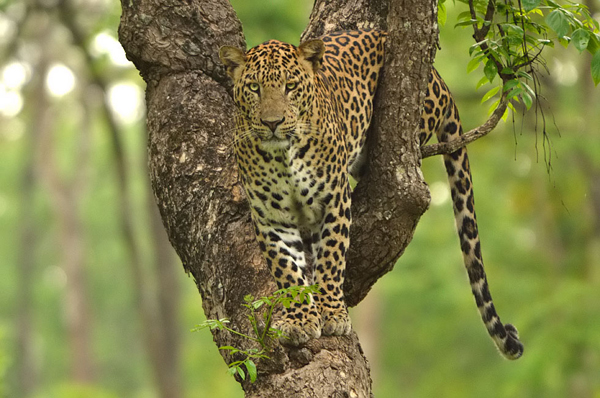 The backwaters of Kabini are also rich with bird life, one gets to see an amazing variety of water birds along with forest ones in Kabini. Painted storks (Mycteria leucocephala) are among the most colorful ones. 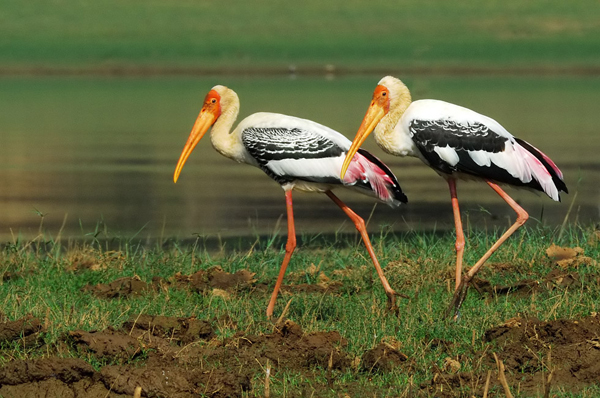 While most of the birds are local, the osprey (Pandion haliaetus) is a visitor from Europe. This bird of prey is known for its excellent fishing skills and the fish rich backwaters are a perfect home for them. 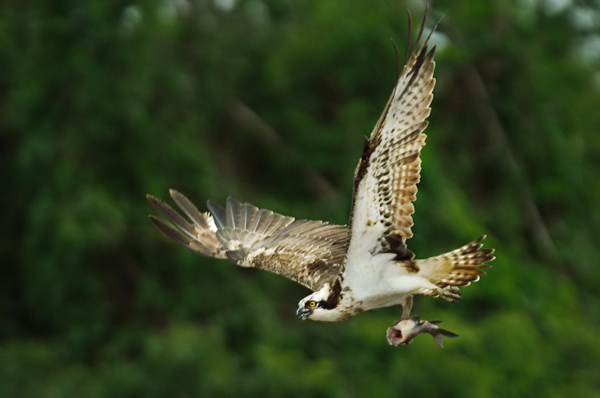 The other excellent fishers of the Kabini backwaters are the rare smooth-coated otters (Lutrogale perspicillata). They hunt in families and share the bounty, making them indomitable. 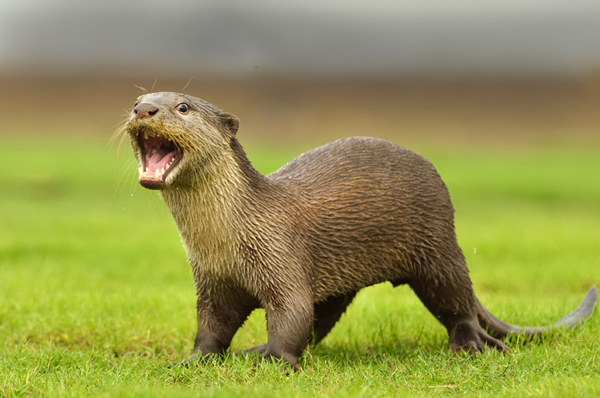 The smooth-coated otters get their name from their coat, which is smoother and shorter than the other otter species. Along with the coat, the webbed toes also help them swim easily. 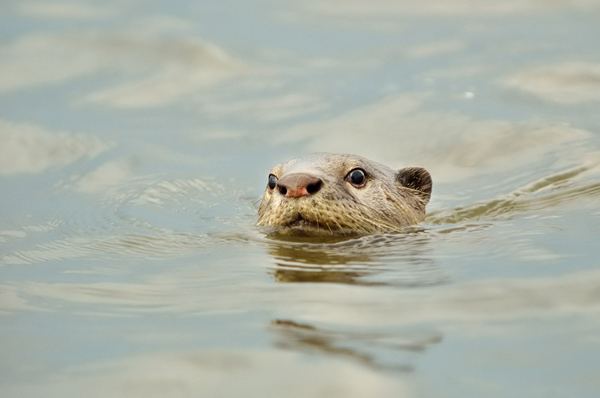 The abundance of food on the banks and in the river has made Kabini home to the famous mugger crocodiles (Crocodylus palustris). The crocodiles come out of the water during the heat of the day to bask. They can grow up to 4.5 meters (15 feet) in length. 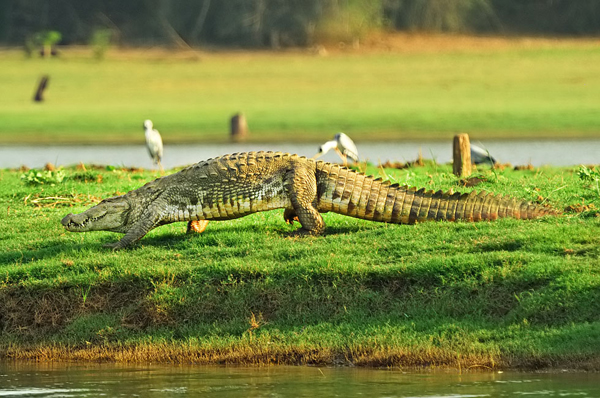 While summers are great to sight animals on the backwaters, the monsoons have their own charm. The grasslands get covered up and the water levels rise. The animals move into the forests as all the waterholes are full. 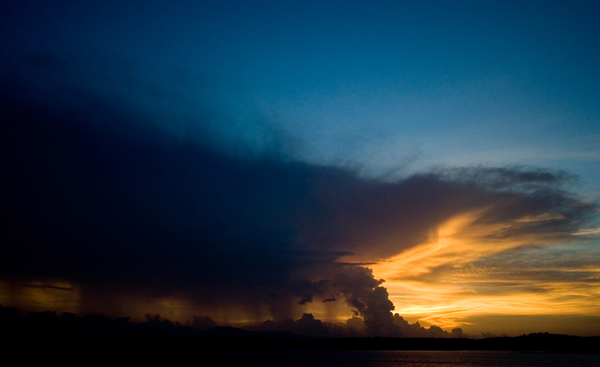 The onset of monsoon also means mating season for the peacocks (Pavo cristatus). The male puts forth his best performance to earn himself a mate. The one with the most colorful plumage and the greatest dance skills wins. Kabini is one of the best places in India to see this majestic bird. 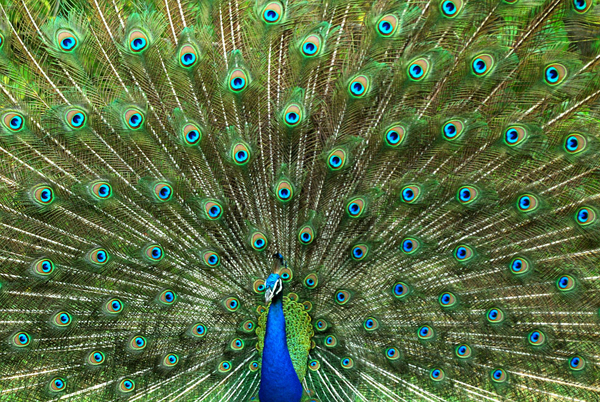 This great mecca of wildlife is under threat today. Stray cattle and humans encroaching into the forest have put a lot of pressure on this delicate environment. Each year human settlements grow on the edge of the forest, shrinking the forest area. 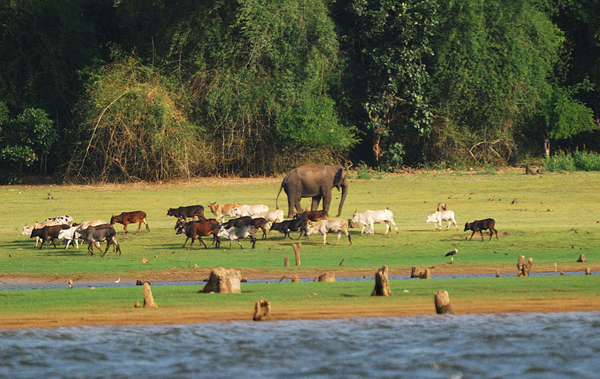 Roads passing through the national park are also a major threat and there have been several road kills in the past forcing the government to close roads during night time. However there is now a proposal to build roads that connect towns without passing through national parks. This could be a new lease of life for these forests. 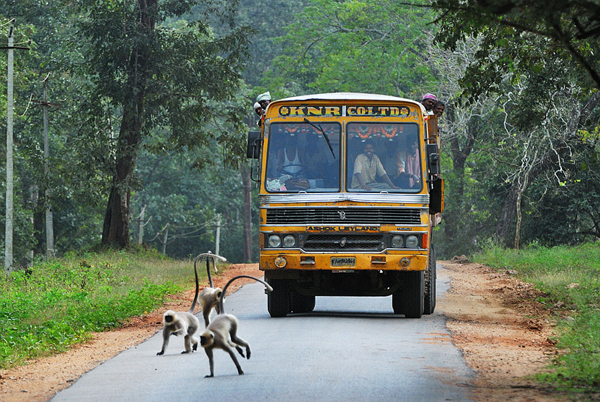 The effect of climate change has also had its effect on Kabini. Owing to the unseasonal rains, each year the numbers of elephants congregating has been declining. The pressure of tourism is also being felt heavily on Kabini with resorts using bad practices mushrooming. 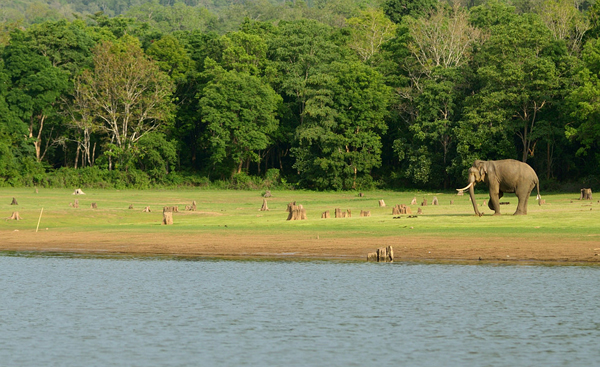 Kabini is a natural heritage to India and the world, one that is rare and unique. The least one can do is be responsible wildlife tourists and be sensitive to this fragile ecosystem. Read more about this in the links below:

(09/23/2013) Located in the southwestern corner of India, the state of Karnataka is celebrated for its stunning biodiversity. In order to honor the natural beauty of the region, wildlife photographer and filmmaker Amoghavarsha and Bangalore based musician Ricky Kej have teamed up to create a music video highlighting Karnataka’s unique species and wild places.

(09/16/2013) The Western Ghats are a globally recognized repository of biological diversity for our planet. We know very little about most species found here, particularly the ecologically sensitive and spectacularly beautiful 179 amphibians. Astonishingly, 87% of all Western Ghats frogs are endemic and found nowhere else on the planet. Our collaborative research project with Drs Paul Robbins and Ashwini Chhatre examining biodiversity in production landscapes of Ghats unearthed some spectacular amphibians in 2013.

(09/13/2013) In October last year, an astounding mass hunting came to light—an estimated 120,000–140,000 Amur falcons were being hunted and killed in Nagaland, India, every year. A small bird of prey, the Amur falcon (Falco amurensis) records one of the longest migrations among all birds—a staggering 22,000 km annually. Their journey starts in China and Siberia where they breed and spend their summers.

Amendments to Indian legislation could pose a threat to wildlife research

(09/05/2013) In the upcoming session of the Indian Parliament, MPs will debate whether researchers and poachers should be treated in the same manner for a breach of law. A new bill proposes to impose substantial penalties, including imprisonment, when researchers with permission to enter a forest area default in any way. At the same time, a poacher or a person in possession banned wildlife product is let off with a fine.

(08/15/2013) Amphibians hop onto your Android phone in an app that focuses on ease of use. There are many among us who have gone out for a walk in the night, during the rains, and heard frogs chorusing. Or looked upon a small amphibian perched perilously by the wayside, and wondered what it is called.