If you, or someone you know, owns a freshwater aquarium, chances are you have seen the peculiar little creature attached face-first to the glass in effort to find a morsel of algae. This algae eater, popularly known as the sucker fish, is the sailfin catfish, or plecos. It is one of the most commonly purchased fish in the freshwater aquarium fish trade, and, according to recent research in The Royal Society B, aquarists often reintroduce the sucker-fish into the wild with detrimental consequences.

In 2000, more than one billion wild-caught and captive-bred fish were bought and sold in over 100 countries. The industry supports economies throughout the world, but with inadvertent ramifications. What pet owners do not realize when they buy plecos is how large they can become; sometimes reaching 20 inches (50 centimeters) in length. When the plecos grows too big for their little glass home, owners sometimes reintroduce them into nearby freshwater sources where they can become abundant and change the way ecosystems look and how they work.

“The flow of nutrients within a stream or river is what regulates the growth of algae and microbes which form the base of the food web,” explains lead author Krista Capps of the Department of Ecology and Evolutionary Biology at Cornell University who conducted her research in the Chacamax River in Chiapas, Mexico. “This means invading organisms, such as plecos, that alter nutrient dynamics have the potential to change food availability in a system and affect all of the other organisms that depend on those resources.” 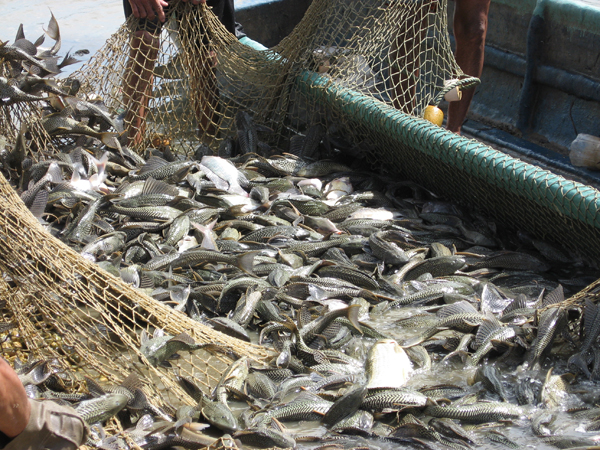 Hauling a large catch of sailfin catfish from the Chacamax River. Photo by Krista Capps.

“In addition to changing the nutrient dynamics in invaded rivers, plecos negatively affect local, often poor, fishermen”, said Capps. The plecos are covered with spiny body armor and frequently become entangled in and destroy expensive fishing nets. Fishers must then spend large portions of their time removing the numerous fish from nets.

“Currently, no commerce has developed around invasive loricariids in Mexico; therefore, the fisheries have collapsed and thousands of fishers are out of work because of an aquarium invader,” said Capps.

Capps and her colleagues propose stricter assessments of risk that should not only look at whether the alien species can live within an invaded ecosystem, but also identify and examine traits such as body and dietary chemistry. This, they argue, may increase the likelihood that an aquarium species would change the function of ecosystems. 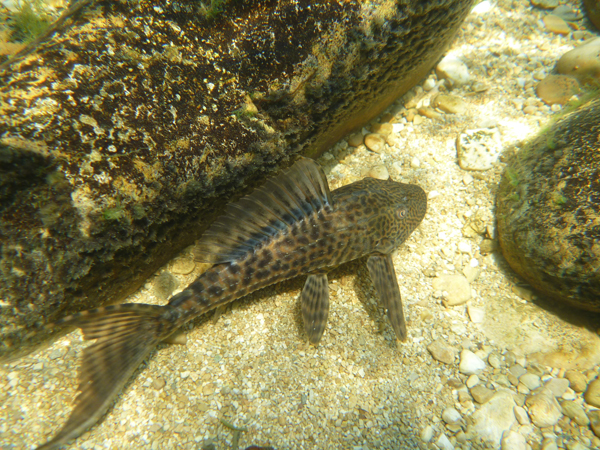 A plecos swimming underwater in the Chacamax River. Photo by Krista Capps.

Plecos are naturally found in rivers in South America, Panama, and Costa Rica. However, because pet owners are returning the fish to fresh water sources around the world, their range is increasing. The fish have been introduced into many rivers in the U.S., for instance.

Efforts to inform pet owners on the dangers of releasing species into non-native waters are being developed by major retailers like Petco, and governmental agencies like the U.S, Fish and Wildlife Services, Sea Grant, and NOAA. 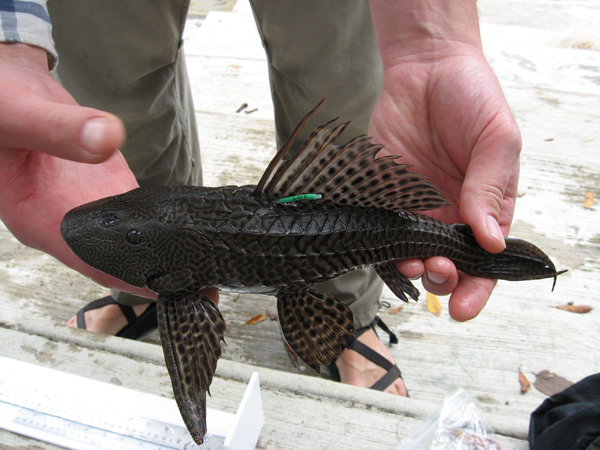 A close-up of the details of the sailfin catfish in the Chacamax River. Photo by Krista Capps.

“I think it would be wonderful to partner with members of the pet industry to develop K-16 curricula utilizing classroom aquaria to educate budding environmental scientists about life history and ecology of fishes and invasion biology,” Capps said to mongabay.com. “By being informed pet owners and by educating others, we can go a long way towards mitigating this environmental issue.”

Unconventional swine: how invasive pigs are helping preserve biodiversity in the Pantanal

(05/06/2013) Ordinarily, invasive and exotic species are a grave threat to native wildlife: outcompeting local species, introducing parasites and disease, and disturbing local ecological regimes. A unique case in the Brazilian Pantanal, however, has turned the tables; here, an introduced mammal has actually aided the conservation of native wildlife.