Male crested penguins are hard workers – especially when it comes to their elaborate breeding ritual. After gathering in massive colonies to mate, they find and establish a nesting site, help incubate the eggs females lay, and then guard the chicks after they hatch. Male crested penguins have also been known to arrive at their breeding locations long before the females. But the reasons for this have been largely speculative. Do the males start swimming back to their breeding grounds earlier than the females? Do the males swim faster than the females? Do the females wait offshore while the males secure nesting sites?

Scientists have answered this using a new modeling technique in a new study published in the Journal of Zoology, and have determined for the first time that male crested penguins do start migrating from their winter feeding grounds towards their breeding grounds about nine days before the females. 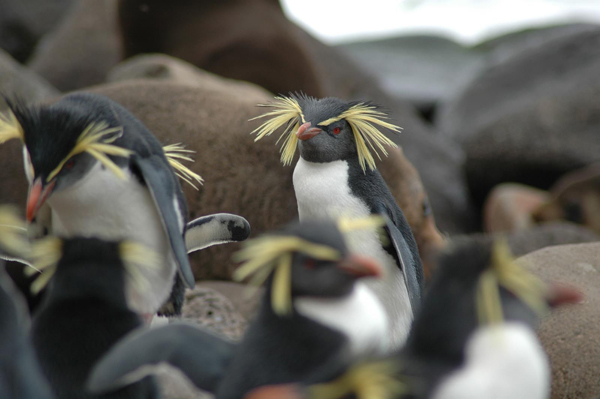 Crested penguins include several species of the genus Eudyptes (black and white plumage with red bills and yellow crests of feathers over their eyes), all of which are currently listed as Vulnerable or Endangered by the IUCN Red List. While threats to these penguins are increasing, they are difficult track.

“At-sea life of penguins is difficult to observe directly, because of their diving habit, their low profile above the sea surface and the harsh weather conditions often prevailing in the regions they live in,” says Jean-Baptiste Thiebot, a researcher with the Centre d’Études Biologiques de Chizé, France at the time of the study, and currently with the the National Institute of Polar Research, Japan. “Thus, for decades we have known very little about their at-sea ecology, being able to reliably study them only on land.”

But with advancements in light-based geolocation loggers, scientists have successfully tracked penguins over large distances, including while the birds are at sea during the winters.

These loggers work on the principle that the length of daylight varies from the equator to the poles, or with latitude, while the time of solar noon varies with longitude. They record ambient light levels using a light sensor at regular intervals, which can then be used to obtain approximate locations of the birds. These tiny devices do not cause as much disturbance to the penguins as GPS or satellite transmitters. However, their location estimates are not as accurate. To refine these estimates, scientists use additional information such as temperature and depth.

Between 2006 and 2007, the scientists armed 66 crested penguins of three species – macaroni, eastern rockhopper and northern rockhopper – with miniature, light-based geolocation loggers in three locations in the Indian Ocean: Crozet, Kerguelen and Amsterdam islands. To determine when penguins began migrating back to their breeding grounds, the team fed individual movement tracks into what’s known as a “broken-stick modeling technique,” a statistical tool which helps in identifying change-points or “breaks” in a series of data.

“This method was used because it is difficult to pick up one specific track location to say ‘this is when penguins started their return back home,’ mainly because of the low spatial accuracy of the locations obtained from light-based geolocation,” explains Thiebot. 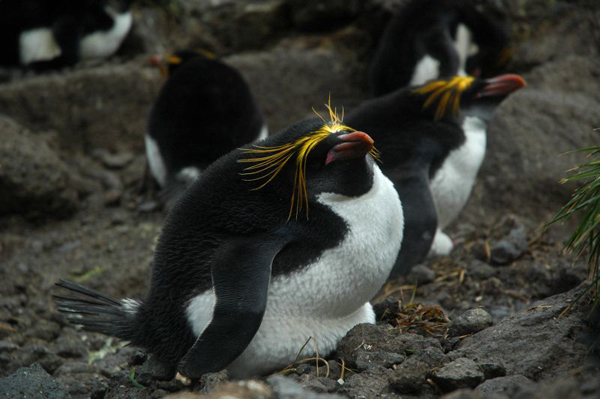 Using this model, the team successfully estimated the dates when individuals decided to turn back from their winter feeding grounds and compared differences in these dates between males and females, both within and between groups.

The team found a common pattern – the males of all three species, and in all three locations, began their journeys toward their breeding grounds an average of nine days before the females.

“It was surprising to see how measurable and consistent among three species and three localities the shift in homing decision date at sea between males and females were,” said Thiebot. “It really supports the fact that males initiate the breeding cycle, even when looking from the sea side.”

But why do the males arrive at their breeding locations earlier? 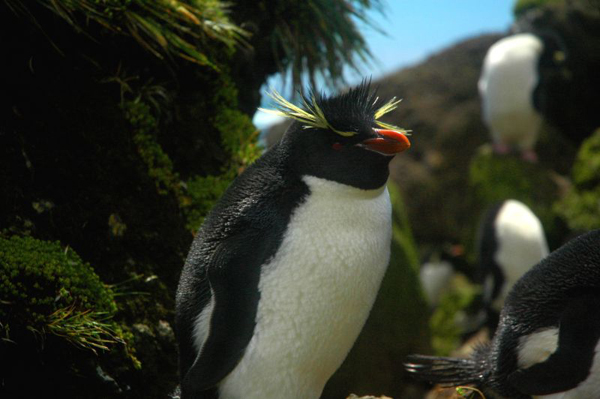 Previous land-based observations have shown that after extended winter foraging, male penguins must secure and defend safe nesting places for their mates, which are a limited resource and thus very valuable. The study states that because penguins generally breed once per year, the intense competition among male penguins to assess and acquire potential nesting sites could be driving them to schedule their arrivals ahead of the females.

However, there remain several unanswered questions about penguins’ lives that require further research.

“One question that rose from our study is that if males leave their marine wintering areas (where they feed to replenish their body condition before coming back on land to start breeding) earlier than females, then males would have less time to feed than the females,” said Thiebot.

“A next step is then to understand whether males have more efficient foraging ability than females. We know from the work of colleagues that males actually do dive deeper than females during winter, which may support such a differential ability.”

(08/13/2012) Humboldt penguins was found along the western edge of South America in Chile and Argentina. They face a barrage of threats including overfishing, drowning as bycatch, El Nino conditions that affect food availability, and climate change. Significant population declines have led to the species being listed as Vulnerable on the IUCN Red List.