Río Huepetuhe gold mine in Peru in the Peruvian Amazon. Photo by Rhett A. Butler

The extent of gold mining in the Peruvian Amazon has surged 400 percent since 1999 due to rocketing gold prices, wreaking havoc on forests and devastating local rivers, finds a new study published in the Proceedings of the National Academy of Sciences (PNAS).

The assessment, led by Greg Asner of the Carnegie Institution for Science, is based on a combination of satellite imagery, on-the-ground field surveys, and an advanced airplane-based sensor that can accurately measure the rainforest canopy and sub-canopy vegetation at a resolution of 1.1 meters (42 inches). The approach enabled the researchers to detect changes in forest cover in areas as small as 10 square meters, roughly 100 square feet, allowing them to map thousands of small, clandestine mines that had never before been detected at scale. 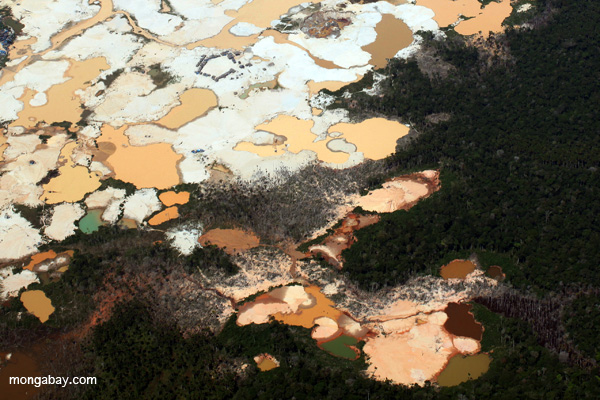 Gold mining in the Peruvian Amazon. Photo by Rhett A. Butler

The results are sobering: the extent of gold mines in the Madre de Dios region of Peru increased from less than 10,000 hectares in 1999 to more than 50,000 ha as of September 2012. The rate of expansion jumped from 5,350 acres (2,166 ha) per year before 2008 to 15,180 acres (6,145 ha) per year thereafter. Surging gold prices, combined with increased access to the region granted by new roads, are thought to be driving the spike in mining activity.

“Our results reveal far more rainforest damage than previously reported by the government, NGOs, or other researchers,” said Asner, noting that small informal mines account for more than half of mining in the region. 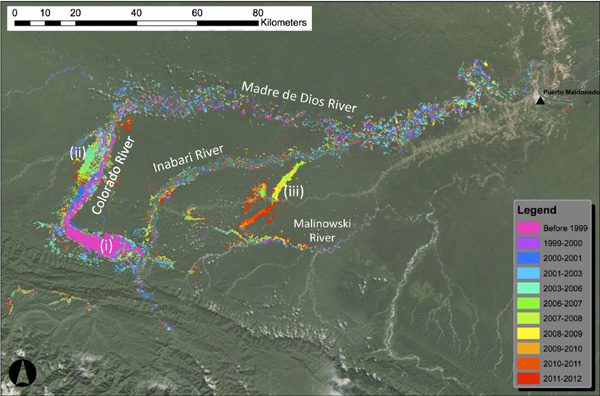 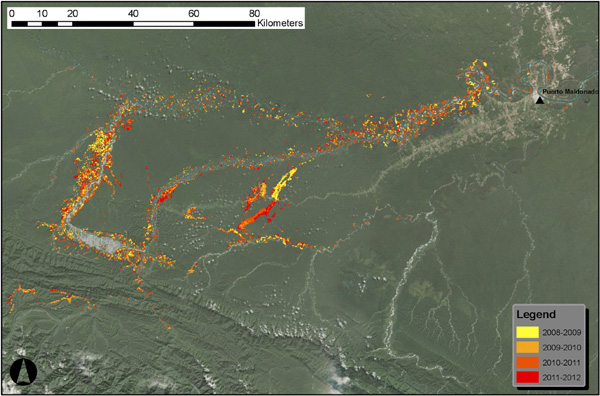 TOP: The regional extent and occurrence of small and large mines throughout the southern Madre de Dios region. BOTTOM: New deforestation driven by small and large gold mining operations in the years 2008–2012, following the global financial recession and the rapid increase in gold prices. Courtesy of Asner et al 2013.

The findings are significant because environmental damage from mining extends far beyond forest loss — mining destroys rivers, exacerbates hunting, and sends toxic waste downstream toward villages and towns. Other studies have found high mercury levels in fish and human populations in and around Puerto Maldonado, a major city down-river from several major mining sites. Other research suggests that the effects of mining could last decades: a paper, also published today in PNAS, shows that mercury from the mid-19th century Gold Rush in California continues to contaminate agricultural areas in the state’s rich central valley. The long-term ramifications for the Peruvian Amazon, which has some of the highest levels of biodiversity ever recorded, are still largely unknown.

“The gold rush in Madre de Dios, Perú, exceeds the combined effects of all other causes of forest loss in the region, including from logging, ranching and agriculture,” said Asner. “This is really important because we’re talking about a global biodiversity hotspot. The region’s incredible flora and fauna is being lost to gold fever.” 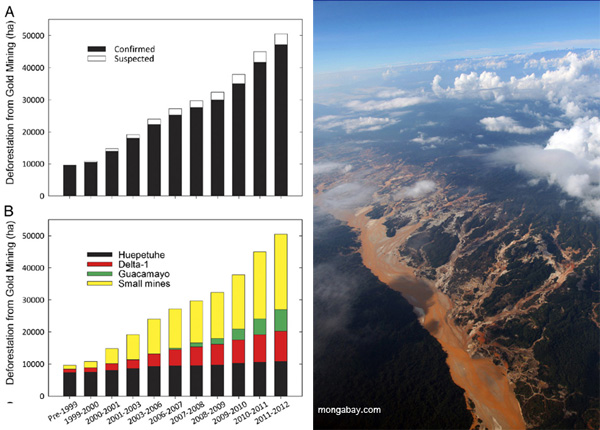 Asner’s paper, which is co-authored with researchers from Carnegie and Peru’s Ministry of Environment, comes as tensions over illegal gold mining in Peru are rising. In late September several associations of informal gold miners launched a “strike” in Madre de Dios, blocking roads, threatening to attack a water processing plant, and assaulting a small farming town along the Interoceanic Highway. The Ministry of Environment had to deploy security forces to protect its offices in Lima and Puerto Maldonado.

“Obtaining good information on illegal gold mining, to guide sound policy and enforcement decisions, has been particularly difficult so far. Finally, we have very detailed and accurate data that we can turn into government action. We are using this study to warn Peruvians on the terrible impact of illegal mining in one of the most important enclaves of biodiversity in the world, a place that we have vowed, as a nation, to protect for all humanity. Nobody should buy one gram of this jungle gold. The mining must be stopped.” 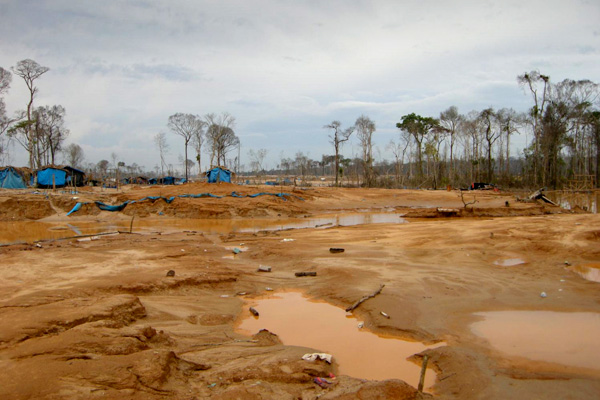 View of gold mining from the ground in Peru. Photo courtesy of Greg Asner

(05/28/2013) The Madre de Dios region in Peru is recognized for its lush Amazon rainforests, meandering rivers and rich wildlife. But the region is also known for its artisanal gold mining, which employs the use of a harmful neurotoxin. Mercury is burned to extract the pure gold from metal and ore producing dangerous air-borne vapors that ultimately settle in nearby rivers. ‘Mercury in all forms is a potent neurotoxin affecting the brain, central nervous system and major organs,’Luis Fernandez, an ecologist and research associate at the Carnegie Institution’s Department of Global Ecology, told mongabay.com. ‘At extremely high exposure levels, mercury has been documented to cause paralysis, insanity, coma and death.’

(07/25/2012) Scientists have created high-resolution carbon maps for 165,000 square kilometers (64,000 square miles) of forest across roughly 40 percent of the Colombian Amazon, greatly boosting the ability of the South American nation to measure emissions from deforestation and forest degradation, reports the Carnegie Institution for Science at Stanford University, which led the effort.

(08/13/2008) The surging price of minerals is contributing to degradation and destruction of rainforests worldwide, warns a researcher writing in the current issue of New Scientist.

(11/09/2006) Troubles are mounting in one of Earth’s most beautiful landscapes. Deep in the Venezuelan Amazon, among ancient forested tabletop mountains known as tepuis, crystalline rivers, and breathtaking waterfalls, illegal gold miners are threatening one of world’s largest remaining blocks of wilderness, one that is home to indigenous people and strikingly high levels of biological diversity. As the situation worsens — a series of attacks have counted both miners and indigenous people as victims — a leading scientific organization has called for the Venezuelan government to take action.