Ongoing burning of fossil fuels could flip which portion of the tropics receive more rainfall: the southern hemisphere or the northern. Currently, the northern hemisphere tropics is the wetter of the two, but why this is has long baffled scientists. Now, new research in Nature Geoscience has discovered that rainfall in the tropics is in part driven by massive ocean currents that travel back-and-forth between the Arctic and Antarctic, a process known as ocean overturning circulation.

Frierson and his team employed data from NASA’s Clouds and Earth’s Radiant Energy System (CERES) and computer modeling to determine that this large ocean current likely produces a wetter tropics in the Northern Hemisphere. However, that could change in the next century: many scientists believe that global climate change will slowdown the ocean circulation, potentially changing where rain falls in the tropics.

“Just a few hundred kilometers separates the Sahara Desert from the African rainforests, so even a small shift of the tropical rain belt can have a devastating effect,” notes Frierson.

NASA animation showing precipitation concentrated in the tropics in the form of average daily rainfall rates during the month of January from 1998-2007.

The theory that global warming is set to slowdown—or even stop—this massive marine current was the driving force behind the Hollywood disaster movie, The Day After Tomorrow. Although scientists dismissed how the filmmakers employed climate science (in the film the world enters an implausible new Ice Age), a slowdown in the current is certainly a theoretical possibility in the future.

Still, Frierson cautions that rainfall patterns in the tropics remain complex and therefore difficult to predict.

“Many aspects of climate change affect tropical rain. We aren’t sure which effect will be most important in the future, so tropical rainfall forecasts remain uncertain for now.”

John Fasullo, a researcher at the National Center for Atmospheric Research who was unaffiliated with the research, says that the discovery that ocean circulation likely drives rainfall in the tropics is an “important step” in predicting shifting rainfall on a hotter world. However, he also agrees that much more research will be needed to untangle the complexities driving tropical rainfall.

“It is important to recognize that this work does not explain rainfall’s regional features, such as for example the contrast between the western Pacific Ocean and the eastern Pacific, nor does it say anything about whether more rainfall will fall over land or over ocean,” Fasullo told mongabay.com.

He also says that to date scientists have not observed any slowdown in ocean circulation, however it is “extremely important” for researchers to continue studying this possibility. 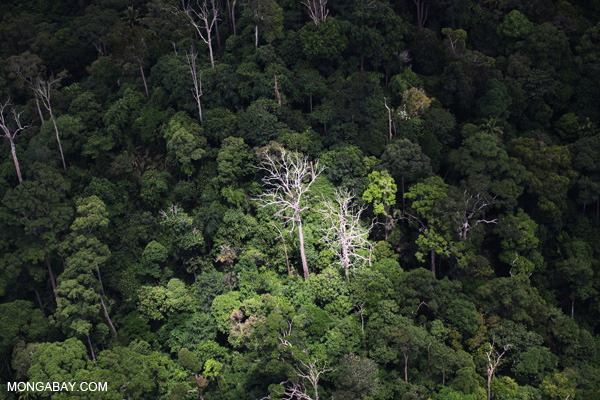 Rainforest in Borneo. If tropical rainfall patterns shift, ecosystems like rainforests could be hugely impacted. Photo by: Rhett A. Butler.

Controversial research outlines physics behind how forests may bring rain

(01/30/2013) It took over two-and-a-half-years for the journal Atmospheric Chemistry and Physics to finally accept a paper outlining a new meteorological hypothesis in which condensation, not temperature, drives winds. If proven correct, the hypothesis could have massive ramifications on global policy—not to mention meteorology—as essentially the hypothesis means that the world’s forest play a major role in driving precipitation from the coast into a continent’s interior. The theory, known as the biotic pump, was first developed in 2006 by two Russian scientists, Victor Gorshkov and Anastassia Makarieva of the St. Petersburg Nuclear Physics, but the two have faced major pushback and delays in their attempt to put the theory before the greater scientific community.

(11/12/2012) Policymakers seeking to conserve forests in southern India should focus on those receiving the highest levels of rainfall, according to new research. Scientists from the Center for International Forestry Research (CIFOR) found rainfall to be the most important environmental determinant of species richness in the Anamalai region of the southern Western Ghats.

Amazon deforestation could trigger drop in rainfall across South America

(09/06/2012) Deforestation could cause rainfall across the Amazon rainforest to drop precipitously, warns a new study published in the journal Nature. Using a computer model that accounts for forest cover and rainfall patterns, Dominick Spracklen of the University of Leeds and colleagues estimate that large-scale deforestation in the Amazon could reduce basin-wide rainfall 12 percent during the wet season and 21 percent in the dry season by 2050. Localized swings would be greater.

(09/04/2012) Salt compounds released by fungi and plants in the Amazon rainforest have an important role in the formation of rain clouds, reports research published in the journal Science.