Cooling waters in the tropical Pacific Ocean appear to be a major factor in dampening global warming in recent years, scientists said on Wednesday.

Their work is a big step forward in helping to solve the greatest puzzle of current climate change research – why global average surface temperatures, while still on an upward trend, have risen more slowly in the past 10 to fifteen years than previously.

Waters in the eastern tropical regions of the Pacific have been notably cooler in recent years, owing to the effects of one of the world’s biggest ocean circulatory systems, the Pacific decadal oscillation.

Many people are aware of the El Niño and La Niña weather systems, which affect the Pacific and bring hotter and stormier or cooler weather in cycles of just a few years, and can have a strong effect on global weather. But few are aware that both of these systems are just part of the much bigger Pacific decadal oscillation, which brings warmer and cooler weather over decades.

The system is now in a cooling phase, scientists have noted, which could last for years. The last such phase was from the 1940s to the 1970s.

The new study by the Scripps Institution of Oceanography and supported by the US government’s National Oceans and Atmospheric Administration (NOAA), published in the journal Nature, has linked the “pause” in global warming with the Pacific oscillation.

Dan Barrie, program manager at NOAA, called the research “compelling” and said: “[It] provides a powerful illustration of how the remote eastern tropical Pacific guides the behaviour of the global ocean-atmosphere system, in this case exhibiting a discernible influence on the recent hiatus in global warming.”

In winter, the effect of the cooler phase of the oscillation on the northern hemisphere is to depress temperatures slightly; but in summer, the cooler waters in the equatorial Pacific have less impact on the northern hemisphere’s weather. The scientists, using computer models, compared their results with observations and concluded that global average annual temperatures have been lower than they would otherwise have been because of the oscillation. But the observed higher summer temperatures of recent years show more of the true effects of global warming, according to the research. Global average temperatures are taken over the whole year, obscuring the effect of this seasonal variation.

Dr Alex Sen Gupta, of the Climate Change Research Centre at the University of New South Wales, who was not part of the study team, said: “The authors have set up some elegant experiments using a climate model to test whether a natural oscillation that has gone through a large swing in the tropical Pacific Ocean over the last decade can explain the recent halt in surface global warming … the new simulation accurately reproduces the timing and pattern of changes that have occurred over the last four decades with remarkable skill. This clearly shows that the recent slowdown is a consequence of a natural oscillation.” 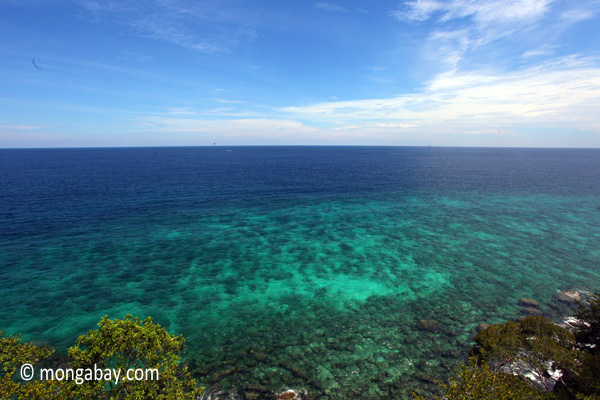 The Pacific Ocean as viewed from Sapi Island. Photo by: Rhett A. Butler.

The role of oceans in regulating the planet’s temperatures has taken on a greater significance in climate change research, as not enough is yet known about how ocean currents and the circulation of warmer surface water to the deep oceans below affect the weather and climate.

Research indicates that oceans have absorbed much of the heat and about a third of the additional carbon dioxide pumped into the air from pre-industrial times. This has an effect – the thermal expansion of the oceans is likely to be the biggest factor behind sea level rise, and the absorption of carbon dioxide is making the oceans more acidic.

Scientists also think that the circulation of heat from the top layers of the ocean, which have been most affected to date, to the deeper oceans below may be another factor behind the “hiatus” in global warming. What the full effects of this exchange of energy may be, particularly on ocean currents, is not yet known.

Researchers have called for more observations of the ocean, including many more buoys and underwater readings.

The slowdown in the upward march of global average temperatures has been greeted by climate skeptics as evidence that the climate is less affected by greenhouse gases than thought. But climate scientists are much more cautious, pointing out that the trend is still upwards, and that the current temperature rises are well within the expected range. Past temperature records and computer predictions both show that periods of slower rises are to be expected as part of the natural variability of the planet’s climate.

These issues are likely to be a major focus of the forthcoming report by the Intergovernmental Panel on Climate Change (IPCC), the body of scientists who produce the most authoritative and comprehensive summaries of climate research. Their eagerly awaited fifth report, seven years since the last, will be published next month. It is likely to affirm that scientists are more certain than ever – at least 95%, up from 90% previously – that climate change is happening and is mostly caused by human actions, but it may suggest that the climate is slightly less sensitive to carbon than some outlying research has posited. That may mean that some of the highest estimates of future temperature rises, of more than 6C within several decades, are less likely, but it does not let the world off the hook – warming of more than 2C is still highly likely on current high emissions trends, and that would cause severe consequences around the world.

A discussion of the recent “hiatus” in temperature rises, and its causes, will form an important part of the IPCC report. However, as the main source papers for the IPCC had to be gathered some time ago, the Scripps-led study of the Pacific decadal oscillation will not have made it into the final report, the first part of which will be presented at a meeting in Stockholm next month.

The Scripps research team said the current cooling phase in the Pacific began just after a strong El Niño year in 1998, but that it was not possible to predict when it might end.

They arrived at the conclusion by using innovative computer modeling methods to simulate regional patterns of climate anomalies. This enabled them to see global warming in greater spatial detail, revealing where it has been most intense and where there has been no warming or even cooling.

They developed new computer models that could show regional and seasonal variations in temperature, as well as global patterns. “Climate models consider anthropogenic forcings like greenhouse gases and tiny atmospheric particles known as aerosols, but they cannot study a specific climate event like the current hiatus,” said Yu Kosaka, co-author of the Nature paper. “We devised a new method for climate models to take equatorial Pacific ocean temperatures as an additional input.”

When these were taken into account, the models predicted the temperature changes observed, including the current “hiatus” in the upward climb of temperatures.

The scientists warned, however, that when the current cooling phase turns, the upward march of temperatures is likely to resume, perhaps at faster rates than before as greenhouse gas emission rates are higher.

Xie said: “We don’t know precisely when we’re going to come out of [the hiatus] but we know that over the timescale of several decades, the climate will continue to warm as we pump more greenhouse gases into the atmosphere.”

Some of the effects of the cooling in the Pacific are not straightforward – drier temperatures in the US midwest are one of the associated results.

During the last cool phase, warmer, drier weather dominated in the midwestern US, as it has in the past 15 years with a serious drought prevailing through much of the region for much of the time.

(09/12/2013) Climate change may push canopy-dwelling plants and animals out of the tree-tops due to rising temperatures and drier conditions, argues a new study published in Proceedings of the Royal Society B. The development may be akin to ‘flattening’ the tiered vegetation structure that characterizes the rainforest ecosystem.

(09/11/2013) Eight Indonesian villagers have sued the country’s president and a number of other high-level government officials over the impacts of climate change and environmental destruction in their province, reports Mongabay-Indonesia. The villagers say they have suffered health problems, experienced financial losses and seen a general decline in their quality of life due to forest and peatland clearing, and they are pinning the blame on some of Indonesia’s highest elected and appointed officials.

(09/04/2013) Climate-conscious folk agree that atmospheric carbon concentration is a key greenhouse gas and a large factor in global climate change. However, there are discrepancies in the methods chosen to address the problem. Some say that carbon emissions should be banned. Some say fossil fuels should be priced. Others say that there are nuances within each. Which tools can we realistically use to mitigate climate change and the drastic effects it will have on our world?

(08/20/2013) On a cross-country bus trip through the American Midwest, I watch cool morning mist rise from patchwork fields. Between the fields stand groves of dark green mid-summer trees, I am reminded that this scene is in jeopardy. The region is cited for its vulnerability to desertification associated with climate change.

(08/19/2013) A new short video predicts temperature changes across North America depending on the future of greenhouse gas emissions. Produced by NASA, the first series shows average temperatures changes (relative to 1970-1999) based on carbon dioxide levels hitting 550 parts per million (ppm) in the atmosphere by 2100. The second, even more dramatic series, shows changes if levels hit 800 ppm by the end of the century. Earlier this year, carbon dioxide levels hit 400 ppm for the first time in around 5 million years, which is longer than humans have been around.