Eight Indonesian villagers have sued the country’s president and a number of other high-level government officials over the impacts of climate change and environmental destruction in their province, reports Mongabay-Indonesia. The villagers say they have suffered health problems, experienced financial losses and seen a general decline in their quality of life due to forest and peatland clearing, and they are pinning the blame on some of Indonesia’s highest elected and appointed officials.

The villagers involved in the lawsuit are from Riau, a province on the island of Sumatra that has seen widespread deforestation over the past 25 years and been plagued by massive forest fires since June. The eight residents of Riau’s Pelalawan and Rokan Hilir districts filed the suit with the Central Jakarta District Court on Monday, together with members of the Forest Rescue Network Riau (Jikalahari), Telapak Riau and the Indonesian Center for Environmental Law (ICEL).

Climate change and deforestation in Riau have caused flooding, left growing seasons unpredictable, made fishing difficult and led to an increase in pests that has reduced agricultural outputs, the residents said, explaining the motivation behind the lawsuit. 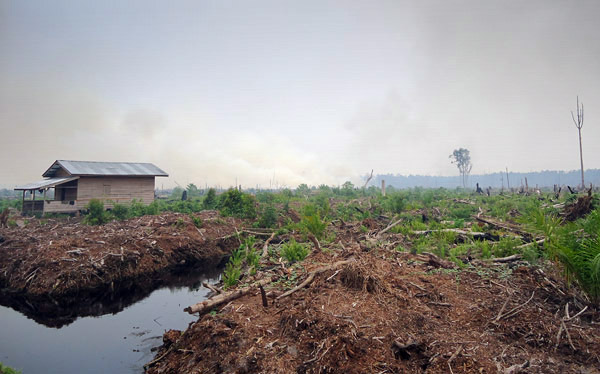 Thick smoke seen clearly from a distance of 200 meters in the village of Pergam. Photo by Made Ali of Mongabay-Indonesia.

According to data from Indonesia’s National Development Planning Board (Bappenas), Riau has lost more than 4 million hectares of natural forests, a total of 65 percent of its total forest cover, in the past 25 years. Nearly half of the forests lost were peat swamp forests, which store huge amounts of carbon and help protect against floods. Forest and peatland fires, which have become an annual occurrence in Riau, release large amounts of carbon into the atmosphere and cause serious health problems for local residents.

“The worst things are the forest and peat fires that occur every year, causing smoke that damages our health and prevents us from making a living and carrying out our daily activities as we normally would,” M. Yusuf, a 69-year-old resident of Serapung village in Pelalawan district and one of the plaintiffs in the case, told Mongabay-Indonesia.

Deforestation in the province has also increased conflicts between humans and forest animals, which can destroy crops in addition to posing a threat to villagers’ safety.

“The forest is gone, so many wild animals come into residential areas. We feel threatened if we try to carry out our daily activities,” said Tarmidzi, 56, from Jumrah village in Rokan Hilir district.

Logging and plantation companies are behind the destruction of forests and peatlands in Riau, the villagers said. Their actions have released large amounts of carbon and contributed to climate change. The government officials named in the case are accused of issuing concession permits for these companies without considering the potential impact on the climate or on local residents, a lawyer involved in the case explained.

“This lawsuit is a tort case,” Suryadi, a lawyer with the Riau Climate Change Advocacy Team, which is representing the plaintiffs in the case, told Mongabay-Indonesia. The defendants, including Indonesian President Susilo Bambang Yudhoyono, the country’s forestry and environment ministers and the Riau governor, were negligent in carrying out their responsibilities to manage Riau forests. This negligence led to forest clearing and peatland destruction and helped trigger global warming, “causing material and immaterial losses to all the residents of Riau Province who have been affected by the impacts of climate change,” Suryadi said.

“The president of the Republic of Indonesia should take responsibility for the actions of the forestry minister, the environment minister and the governor of Riau, who recklessly granted concessions,” Suryadi added.

In addition to causing losses to Riau residents through negligence, the plaintiffs are also accusing defendants of violating Indonesian laws and regulations related to forest management and climate change mitigation. Forestry Minister Zulkifli Hasan violated numerous laws and regulations, Suryadi said, by issuing concessions on lands that should have been protected.

Riau Governor Rusli Zainal was also accused by the plaintiffs of negligence for failing to allocate funds in the 2013 budget to implement a local action plan to reduce greenhouse gas emissions – something he himself mandated in a 2012 regulation. Rusli is currently facing corruption charges related to two separate cases, one of which involves the granting of logging permits in Pelalawan district.