According to a new review of 27 climate models, scientists say the global climate is likely to experience a warmth as great as any in the last 65 million years, only much, much faster. According to the study published today in Science, the Earth’s land temperature will rise by 4 degrees Celsius (7.2 degrees Fahrenheit) from pre-industrial levels by 2100 if we continue on our current emissions trajectory.

“What is perhaps most noteworthy is the rate of change,” says co-author Noah Suresh Diffenbaugh with Stanford University. “For instance, the rapid global warming event that occurred some 55 million years ago was as large as these warming projections, but that event occurred over many thousands of years, not a mere century.”

If it occurs, the temperature rise would be at least 10 times faster than anything seen since the mass extinction of the dinosaurs, creating unknown impacts on the Earth’s species and ecosystems.

“It’s not easy to intuit the exact impact from annual temperatures warming by 6 C,” Diffenbaugh said. “But this would present a novel climate for most land areas. Given the impacts those kinds of seasons currently have on terrestrial forests, agriculture and human health, we’ll likely see substantial stress from severely hot conditions.”

More warming, the scientists warn, will certainly intensify severe weather and make today’s hottest summers the norm. The scientists write that this warming over such a short span could make it impossible for many species to adapt.

“Species and ecosystems will encounter not only a range of climate conditions that is potentially different from any in the past but also the broader conditions of the Anthropocene , in which human actions either dominate or strongly influence a wide range of Earth system processes,” the researchers write.

Even if a species is capable of outrunning global climate change, it may not be able to in the face of habitat destruction, pollution, invasive species, and overexploitation. The scientists note that the combination of rapid global warming and human ecological impacts “will
present terrestrial ecosystems with an environment that is unprecedented in recent evolutionary history.”

Still, the scientists note that a number of uncertainties underpin the path of future warming, including feedback processes like the carbon cycle and clouds. However, the largest of the uncertainties is how much additional fossil fuels will human civilization burn? While some warming is unavoidable given past emissions, the worst impacts could still be eluded.

“The future of the planet lies in our hands,” notes co-author Chris Field also with Stanford. 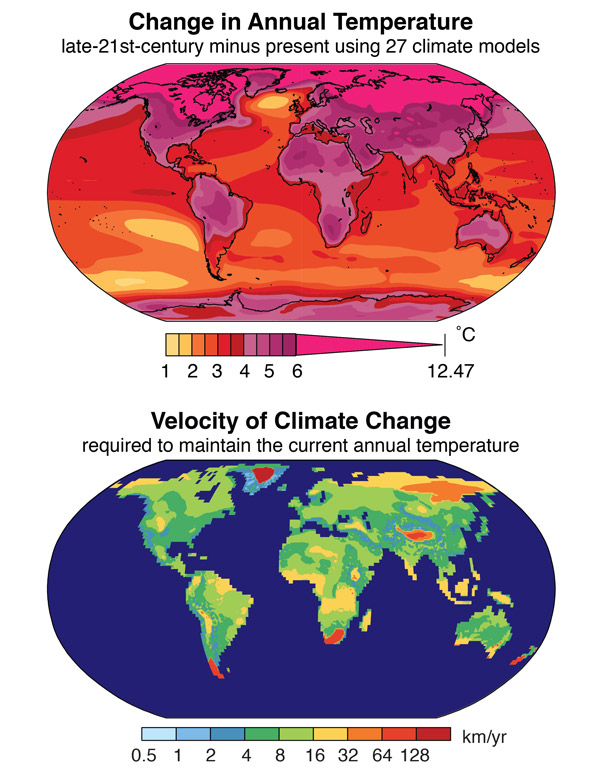 (06/26/2013) Sources of campaign contributions to members of Senate suggest Congress will be unlikely to take action on comprehensive climate legislation, indicates data collected by MapLight, a group that tracks money’s influence on politics.

(06/24/2013) After a colder-than-average spring, Alaska is suffering a sudden and record-breaking heatwave. Temperatures on Monday, June 17th hit a stunning 96 degrees Fahrenheit (35 degrees Celsius) in Talkeetna, Alaska, just below the state’s highest temperature ever record of 98 degrees Fahrenheit in 1969. On the same day, NASA’s Terra Satellite’s Moderate Resolution Imaging Spectroradiometer (MODIS) took a rare image of a cloud-free Alaska.

(06/19/2013) What does a wolf in Yellowstone National Park have in common with an ambush spider on a meadow in Connecticut? Both are predators and thus eat herbivores, such as elk (in the case of wolves) and grasshoppers (in the case of spiders). Elk and grasshoppers also have more in common than you probably imagine: they both consume large quantities of plant matter. While scientists have long-known that predators lead to carbon storage by reducing herbivore populations, a new study reveals a novel way in which top predators cause an ecosystem to store more carbon.