Editors note (7/7/13): Re-analysis of the original data has led to revision of the annual forest loss data.

Deforestation has sharply increased in Amazon rainforest countries outside of Brazil, finds a new analysis based on satellite data. 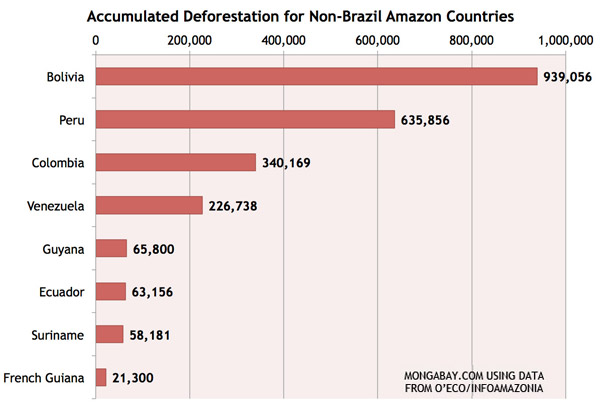 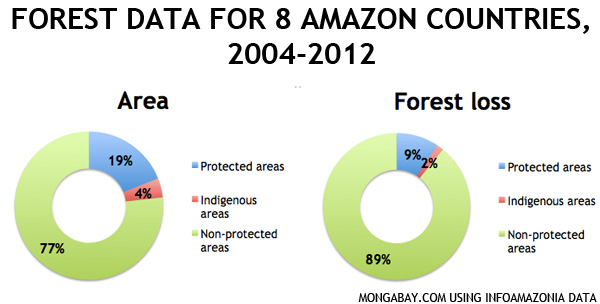 Overall, the assessment found that the eight Amazon countries lost some 2.3 million ha of forest between 2004 and 2012. By comparison, Brazil, which was excluded from the study, lost 11.1 million hectares during the period. But Brazil’s deforestation rate is declining, falling from 2.7 million ha in 2004 to 465,600 ha in 2012. More than 60 percent of the Amazon rainforest lies within Brazil. 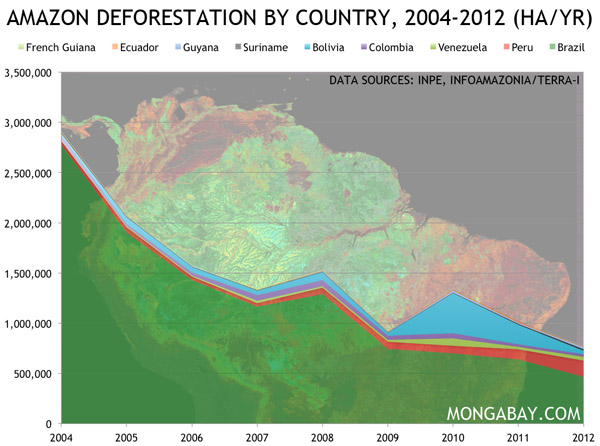 Brazil’s drop in deforestation has been partly attributed to its development and implementation of a near real-time deforestation tracking system that alerts authorities of changes in forest cover, enabling them to take action shortly after or even during forest clearing. Terra-i’s system, which uses MODIS data from NASA’s Terra and Aqua satellites, now offers similar capabilities beyond the Brazilian Amazon.

(06/06/2013) Brazil’s greenhouse-gas emissions dropped 39 percent between 2005 and 2010, largely due to a reduction in deforestation, reports an inventory released yesterday by the Brazilian government.

(06/05/2013) Today in a press release for the U.N.’s World Environment Day, the Brazilian government highlighted a sharp drop in deforestation since 2012. The trouble is, the South American superpower failed to acknowledge what appears to be a sharp rise in Amazon forest loss since last year, reports Greenpeace.

(05/18/2013) Satellite analysis by a Brazil-based NGO indicates that deforestation in the Brazilian Amazon continues to pace well ahead of last year, when the government passed a weakened version of its law governing use of forest lands.

Continued deforestation in the Amazon may kill Brazil’s agricultural growth

(05/09/2013) Continuing deforestation in the Amazon rainforest could undermine agricultural productivity in the region by reducing rainfall and boosting temperatures, warns a new study published in the journal Environmental Research Letters.

(05/08/2013) Brazil’s advanced satellite monitoring system, coupled with increased law enforcement, was responsible for nearly 60 percent of the 101,000 square kilometer-drop in deforestation observed between 2007 and 2011, argues a new study published an international think tank.