Australia is hoping to put a permanent end to Japan’s annual slaughter of hundreds of whales in the Southern Ocean, in a landmark legal challenge that begins this week.

Australia, a vocal opponent of Japan’s annual “scientific” hunts in the Antarctic, says it is confident that the international court of justice (ICJ) in The Hague will outlaw the hunts at the end of a highly anticipated case that is due to start on Wednesday.

The whaling fleet attempts to kill 935 minke whales and 50 fin whales every year in the Southern Ocean—which Australia declared a whale sanctuary in 1999 – amid protests from conservation groups and countries in the region.

Australia’s attorney general, Mark Dreyfus, said he was confident that the ICJ would ban the hunts before the next expedition begins at the end of this year.

“We want commercial whaling to stop and that includes the so-called scientific whaling program that Japan has been carrying on for many years,” Dreyfus, who will make Australia’s case at The Hague, told reporters.

“There’s no appeal from the decisions of the international court of justice. Of course we’re hopeful of getting the result that we want,” he said.

Bill Campbell, the Australian agent who will present the opening case against Japan, told the Guardian: “We have taken this case because we believe the whaling being done by Japan is blatantly commercial whaling and is not for any scientific purpose. It is in breach of the international convention.

“There’s no higher court than the ICJ. Both Japan and Australia have said that if there’s a decision they will abide by it. We hope they will decide to outlaw it before the next whaling decision. Our focus is whaling in the southern hemisphere.

“Japan is the only country in the world who carries on whaling on the basis of scientific research. Norway and Iceland do it on a different basis.” 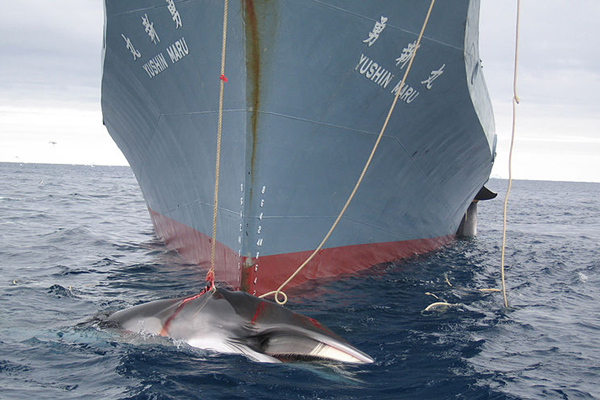 A Minke whale killed by the Yushin Maru, a Japanese harpoon vessel in 2008. Photo by: Customs and Border Protection Service, Commonwealth of Australia.

The hearing will end on 16 July and a ruling is expected by the end of the year.

Japan is permitted to catch a certain number of whales every winter for research under a clause in the International Whaling Commission’s (IWC) 1986 ban on commercial whaling. Meat from whales caught during the hunts is processed for legal sale in Japanese supermarkets and restaurants.

Critics say Japan is using the IWC provision to conduct commercial whaling under the guise of scientific research, adding that the mammals’ migratory, reproduction and other habits can be observed without slaughtering them.

Japan is expected to challenge the court’s jurisdiction to hear the case, and to insist that its whaling program is purely scientific and so does not violate the IWC ban.

“Japan believes it has a strong case because it complies with the international convention for the regulation of whaling,” said a foreign ministry official in Tokyo who did not wish to be named. “Japanese whaling is a lawful activity, conducted in accordance with those international regulations.

“Japan’s whaling activities are conducted purely to enhance science for conservation and sustainable use, and we’ll make our case based on those facts.”

Japan has killed more than 10,000 whales since the IWC ban went into force in 1986, according to the Australian government.

Australia will argue that Japan is in breach of the ban on commercial whaling and of international obligations to preserve marine animals and the marine environment. In written submissions, it has asked the court to withdraw all whaling permits from the Japanese fleet.

Don Rothwell, an expert on international laws relating to whaling at the Australian National University, believes Australia will struggle to win the case. “If it was an easy case to make, previous Australian governments would have no doubt explored these options,” he told the Australian Broadcasting Corporation.

The Antarctic hunts have divided opinion in Japan. While many Japanese believe their country has a right to continue its tradition of hunting and eating the animals, a significant number oppose the Southern Ocean hunts because they rely on huge government subsidies.

“It doesn’t sell in Japan, and I don’t see that changing any time soon,” said Nanami Kurasawa of the Dolphin and Whale Action Network, a Tokyo-based pressure group.

According to a recent study by the Nippon Research Group, whale meat consumption has fallen to about 1% of its 1960s peak. Current stockpiles of unsold whale meat have increased to nearly 5,000 tonnes, about four times greater than they were 15 years ago.

“Selling meat on the open market has been a total failure,” Kurasawa said. “If the court rules in Australia’s favour, it will be a good opportunity for Japan to stop the Antarctic hunts. It would be the intelligent thing to do.”

Japan’s whalers have struggled to meet their quota in recent years amid clashes with the maritime conservation group Sea Shepherd. Earlier this year it returned with a record low catch of 103 minke whales and no fin whales, blaming “unforgivable sabotage” by activists.

Japan’s delegation at the ICJ will be led by the deputy foreign minister, Koji Tsuruoka, who is chief negotiator over Japan’s possible participation in the Trans-Pacific Partnership, a region-wide free trade agreement that includes Australia.

The foreign ministry official declined to speculate about the outcome of the legal bid, but added: “Japan and Australia have different opinions about whaling, but we enjoy strong bilateral ties and I do not expect the whaling issue to undermine our relationship.”

Dreyfus said both countries agreed that the ICJ was the “best place” to resolve their differences over whaling. “Both countries value our strong bilateral relationship and the friendship forged between our nations over many years,” he said. 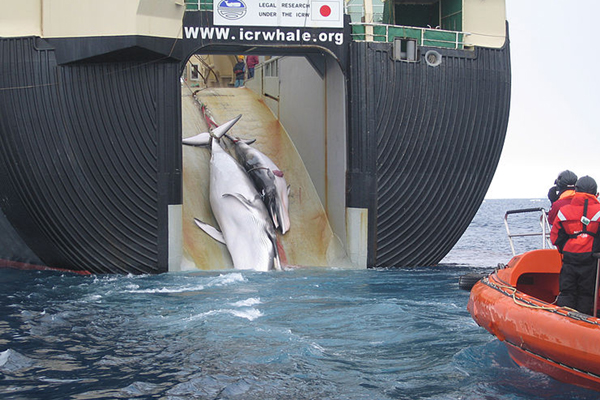 A Minke whale and calf on Nisshin Maru, a Japanese ship that is the world’s only factory whaler. Photo by: Customs and Border Protection Service, Commonwealth of Australia.