An AVAAZ petition calling upon Indonesian officials to put a stop to a proposal to open tens of thousands of hectares of protected rainforest to mining, logging, and oil palm plantations has surpassed one million signatures.

The petition, posted on AVAAZ by Rudi Putra on May 7th, targets a new spatial plan submitted by the governor of Aceh, the western-most province on the island of Sumatra. The spatial plan, which governs zoning in the province, would potentially open vast areas of protected forest for industrial activities. The petition focuses on the risks the plan poses to Aceh’s endangered wildlife, including orangutans, rhinos, tigers, and elephants.

“I live and work in the last place on Earth where endangered orangutans, rhinos, elephants, and tigers still roam together — but it’ll be bulldozed to bits unless our President hears our call and steps in to save this unique habitat,” wrote Putra, the 2013 winner of Future for Nature award, a prestigious wildlife conservation prize. “Right now in one of Indonesia’s most pristine and untouched forests, a local Governor wants to let mining and palm oil companies move in to decimate areas the size of a million football fields! And the national Forestry Ministry looks like it might let him unless the President steps in to reject this orangutan-killing plan.” 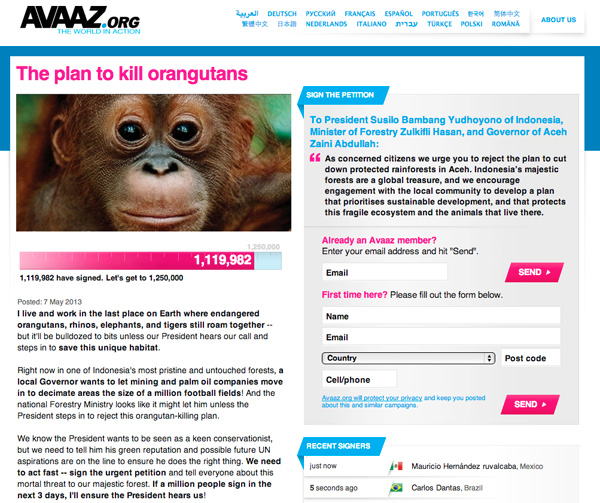 The petition is addressed to Indonesian President Susilo Bambang Yudhoyono, Forestry Minister Zulkifli Hasan, and Aceh Governor Zaini Abdullah. The Ministry of Forestry, which is has final authority over changes in zoning within the forest estate, is expected to rule on the spatial plan this month.

Aceh has the most forest cover of any province in Sumatra, which has experienced large-scale deforestation for palm oil, timber, and agricultural production over the past thirty years.