Deforestation may significantly decrease the hydroelectric potential of tropical rainforest regions, warns a new study published in Proceedings of the National Academy of Science.

The study, led by Claudia M. Stickler at the International Program at the Amazon Environmental Research Institute (IPAM-International), used climate, hydrological, and land use models to forecast the impact of potential forest loss on hydropower generation on the Xingu River, a major tributary of the Amazon where the world’s third largest dam — Belo Monte — is currently under construction. They find that deforestation could inhibit rainfall and discharge by 6 to 36 percent, potentially limiting Belo Monte’s electricity output to just a quarter of its installed capacity.

Yet despite the potential impact, the researchers say that policymakers are largely failing to account for the effects of deforestation on power generation.

“The problem is that power plant designers typically ignore the effects of future deforestation. Or, if they do consider it, they presume that deforestation will increase the amount of water flowing to the dams,” said Stickler in a statement. “When we incorporated the effects of deforestation at the regional level, our results show quite the opposite.” 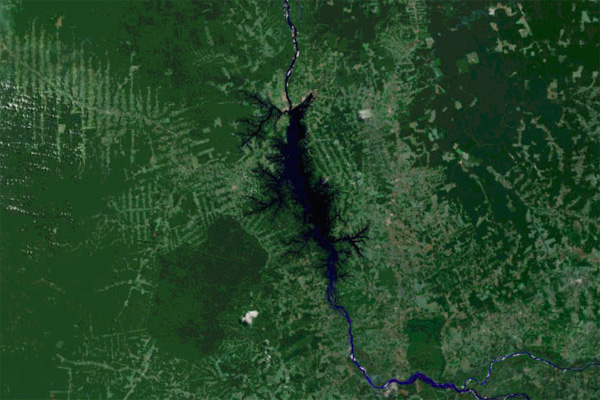 Satellite image of the Turucui dam and associated deforestation in Brazil. (Photo courtesy of DigitalEarth)

The paper goes on to state that the relationship between forest cover and river discharge needs incorporated into viability assessments for new hydroelectric projects. If planners want to maximize the output of their hydropower plants, then they would be wise to develop strategies to control or reverse deforestation. In the case of any dams on the Xingu River, the authors suggest re-establishing forest cover on degraded pasture on long-ago deforested lands.

“These results are extremely important for long-term energy planning,” said Marcos Costa, one of the study’s authors from the Federal University of Viçosa in Brazil, in a statement. “We are investing billions of dollars in hydropower plants around the world. The more rainforests left standing, the more water we’ll have in the rivers, and the more electricity we’ll be able to get from these projects.”

“Ending deforestation should be viewed as an issue of national energy security,” added study co-author Dan Nepstad, also of IPAM-International. Brazil has some 180,000 megawatts (MW) of untapped hydroelectric potential, although 80,000 MW of that lies in protected areas, according to The Economist.

However the authors note that dams themselves bring a litany of concerns, including ecological damage to rivers and surrounding forest areas, forced displacement of local people, increased pressure for deforestation, and new vectors for disease. A tropical dam can also exacerbate climate change by releasing greenhouse gases in the form of methane from decaying organic matter at the bottom of its reservoir. Phillip Fearnside, a scientist not involved in the latest PNAS study, has called Amazon dams “methane factories” for their climate impact.

The paper is timely considering the number of dams that are planned in tropical regions around the world. For example Amazon counties have built or are planning to develop more than 400 dams in the Amazon Basin alone. Meanwhile dozens of dams are slated for the Mekong basin, the Malaysian state of Sarawak, and Central Africa. Each of these regions is experiencing high rates of forest loss, calling into question hydropower forecasts should deforestation continue.

“Like other energy sources, hydropower plants present large social and environmental costs,” the authors write. “Their reliability as energy sources, however, must take into account their dependence on forests.”

(05/03/2013) On Thursday roughly 200 indigenous people launched an occupation of a key construction site for the controversial Belo Monte dam in the Brazilian Amazon. The protestors, who represent communities that will be affected by the massive dam, are demanding immediate suspension of all work on hydroelectric projects on the Xingu, Tapajós and Teles Pires rivers until they are properly consulted, according to a coalition of environmental groups opposing the projects.