An American company has halted work on a controversial palm oil project in Cameroon due to opposition from local communities and environmentalists, reports Reuters.

Herakles Capital, a U.S.-based investment firm, said it has stopped development of its 73,000-hectare oil palm planation and laid of 690 workers pending a government review of the 2009 deal that granted the land to the firm. The move came weeks after an order from the Forestry Ministry and a day after a joint report from Greenpeace and the Oakland Institute alleged that Herakles failed to obtain the proper permits prior to clearing rainforest for palm nurseries and was selling timber that was supposed to go the Cameroonian government.

Herakles denied the allegations and said it is working with the government to resolve the issue.

The project has proved contentious due to opposition from villagers who say they will lose access to hunting groups and community forest plots. Conservationists have argued that the plantation puts endangered wildlife at risk. Nearly 90 percent of the plantation area is covered by “dense” forest, according to aerial surveys conducted by Greenpeace, which has campaigned against the project since last year.

Herakles maintains that the project will bring money to the cash-strapped region and serve as a “buffer” around protected forest areas. But the company’s commitment has been questioned since its decision to not seek eco-certification under the Roundtable on Sustainable Palm Oil (RSPO) for the project. Herakles has also made dubious claims about the environmental benefits of palm oil plantations, including asserting that converting rainforests for oil palm plantations would help mitigate climate change. The company has further been caught making contradictory statements about its project, according to Greenpeace. 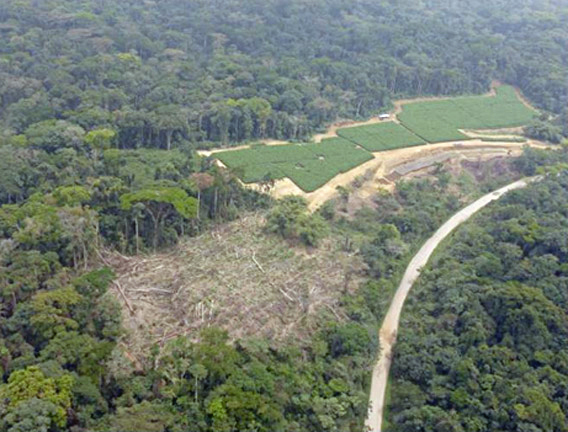