The Namib is the oldest desert on Earth, composed of gravel plains and dune fields that have been intact for circa 40 million years. It forms a thin strip along the coast of southwestern Africa running for approximately 2000 km from Namibia into Angola. Its unique assemblage of flora and fauna are specialised for desert life and include one of the longest lived organisms on the planet, a plant named Welwitschia mirabilis, with a lifespan of 5 – 15 centuries. The Namib is also home to the only truly desert dwelling chameleon on the globe, the Namaqu chameleon (Chamaeleo namaquensis). The gravel plains are home to a multitude of invertebrates and small vertebrates. The topsoil is gypsum and calcium carbonate enriched, and forms a delicate crust upon which impressions of tire tracks and footprints remain for decades.

The Namib desert is truly a remarkable, but fragile ecosystem, which cannot tolerate extreme anthropogenic utilisation (human environmental impacts) without major consequences. Most of the Namib is under official protection within the Namib Skeleton Coast National Park (10.7 million hectares), a mega park which includes the Dorob National Park (780,000 hectares) and the Namib Naukluft Park (circa 5 million hectares) near Swakopmund. Use within these parks is restricted to casual tourists, plus organised recreational activities and research under permit from the Namibian Ministry of Environment and Tourism. Anthropogenic impacts are typically limited, because vehicles must drive on prescribed routes only, and removal of flora, fauna and inanimate objects is strictly prohibited without a permit. Anthropogenic impacts must be mitigated under the terms of Namibia’s robust Environmental Management Act of 2007. 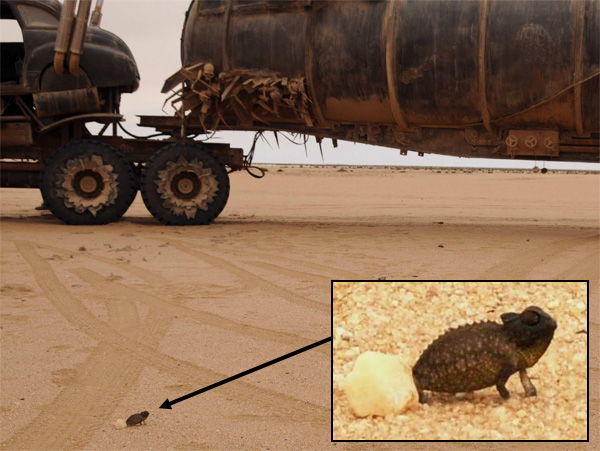 Namib chameleon with a truck from the Mad Max sequel in the background. Courtesy of Krystal A. Tolley and Michele Menegon

But during 2012, areas of the Dorob and Namib Naukluft National Parks were utilized as site locations for the filming of a sequel (Fury Road) to the popular Mad Max film series. During these operations, vehicles were permitted to drive off the official tracks, with the understanding that the area would be rehabilitated immediately thereafter. These activities are cited as injecting $40 million into the Namibian economy and temporarily employing hundreds of locals (The Guardian, 5 March 2013), a significant event for an African country with a population of just over 2 million. But in contrast, the Namibian tourism industry which is based primarily on ecotourism because of the remarkable Namibian landscape, brings in $780 million per year and employs tens of thousands of Namibians on a permanent basis.

Certainly, any activities within fragile ecosystems will have an impact, but these should be minimized and mitigated. In the case of recent filming activities, impact to this sensitive area was increased by driving outside official routes and by sustained encampments in previously pristine areas. These activities scarred the surface of the fragile topsoils across many thousands of hectares, and sensitive plants and animals were in direct line of driving. Because no Environmental Impact Assessment (EIA) was carried out to obtain a baseline prior to the filming, the extensive damage to the ecosystem is not quantifiable. Rehabilitation efforts that took place after filming consisted of dragging chains and nets across the landscape to partially erase the visual scars. These activities further damaged an even wider area, and dragged over surviving plants and animals. Overall, this lacks a precautionary approach, and indicates an inherently higher value on entertainment, than on preservation and conservation of our globe’s unique ecosystems. 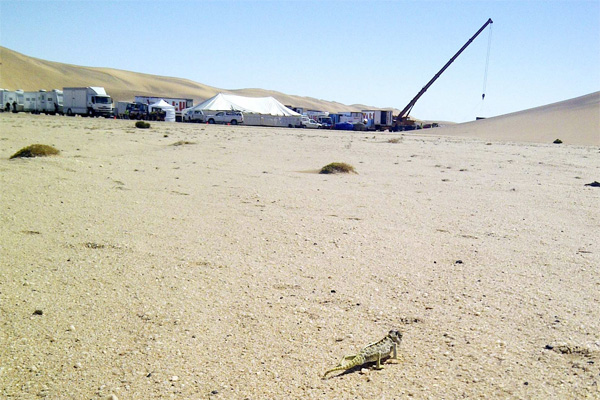 Namaqua chameleon near the Mad Max set in Namibia. Courtesy of Krystal A. Tolley and Michele Menegon

While an increase in activities such as these could boost Namibia’s economy in the long-term, it is important not to lose sight of why this country is so desirable for these activities to begin with. What Namibia has to offer is its unspoiled and unparalleled, but irreplaceable wilderness. Short term and cursory cosmetic measures applied to acute anthropogenic impacts come with a cost: long-term damage to the very resource that makes the Namib so valuable and sought-after. Extreme care must be taken to ensure that impacts from such activities are minimal, and that rehabilitation is directed at restoring the habitat to its original form, not at superficial, perfunctory and incomplete erasure of the scars to the ecosystem. Furthermore, baseline ecological and survey data is necessary in order for environmental impact assessments to properly assess the potential damage from such usage, and to provide adequate advice regarding mitigation, to ensure that this ecosystem retains its value for the Namibian economy.

(10/19/2010) Africa’s most biodiverse nation, Tanzania, has added a few more species to its dockets. Researchers have discovered three new amphibians in the always surprising Eastern Arc Mountains, a region which has supplied a number of new species recently. All three new species are members of the frog genus Callulina. Described in the Zoological Journal of the Linnean Society the researchers warn that all three of the new frogs are confined to small habitats threatened by deforestation and firewood collection.

(01/04/2009) 17 previously unknown species of reptiles and amphibians have been discovered in the rainforests of eastern Tanzania, report Italian and Tanzanian scientists. Conducting surveys of the ‘virtually unexplored’ forests of the South Nguru Mountains between 2004 and 2006, Michele Menegon of the Natural Science Museum of Trento in Italy and colleagues recorded 92 species of ‘herps’, of which 17 had never before been documented. The new species — which include chameleons, tree frogs, and snakes, among others — are believed to be endemic to the region.