Commentary by Erik Meijaard on 4 April 2013

WWF issued a response to this editorial on April 8, 2013

WWF-Indonesia recently caught the attention of the global media with their announcement that the Sumatran rhinoceros still exists in Indonesian Borneo, some 40 years after being declared extinct there.

This sounds like great news for biodiversity conservation. But is it really?

Sumatran rhinos were once wide-spread in South-East Asia, but poaching for their horn decimated populations. In Kalimantan, the Indonesian part of Borneo, there had been no reliable records of the species since the 1970s, although there were rumors of their continued existence at least until the mid-1990s (Meijaard, 1996).

Tracks recently discovered in an undisclosed part of Kalimantan by a WWF field team provide the first evidence that the species is not yet extinct in Kalimantan. Commenting on the findings, WWF-Indonesia’s conservation director said, “WWF-Indonesia together with all stakeholders will conduct a follow-up and more comprehensive survey to map rhinos’ habitat preference and their population in West Kutai.”

I am seriously wondering what benefit WWF’s press announcement has for the only known rhino in Kalimantan. Certainly, the risks for the animal have now gone up significantly. From a situation in which no one was aware of its existence, millions of people now know that it exists. Yes, that means fame to this rhino, but might lead to an untimely death. 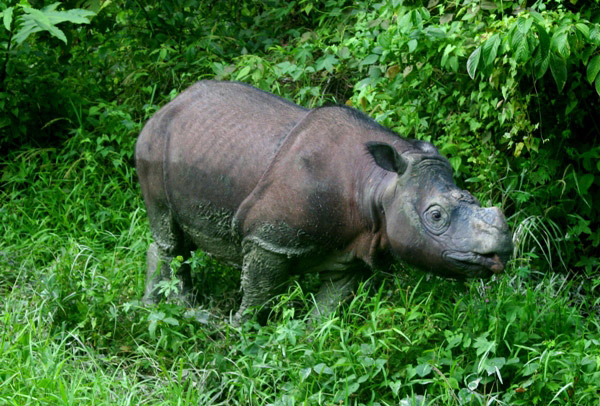 From the context of the news release and accompanying video it is possible to work out approximately where it occurs. For anyone with an interest in rhino horn and some cash, it wouldn’t be too much of an effort to work out where the survey team had recently worked—such things do not go unnoticed. In a country riddled with bribery and corruption, the next easy step might be to try to buy information about the rhino’s latest whereabouts. Does WWF have effective confidentiality systems in place to prevent this? I doubt it.

In addition, nothing so far indicates that there are effective measures in place to prevent the animal from being poached. That would require well-trained rhino patrols, control of access to the area, and effective collaboration with local communities and law enforcement agencies. Experiences from Sumatra, another area where a few rhinos remain, indicate that it takes years to develop such effective anti-poaching measures.

An example from Vietnam shows how dangerous it is to publicly announce the discovery of a lost rhino population. In 1989, a small population of Javan rhinos was rediscovered in Vietnam where the species had long been thought extinct. Lobbying by conservation organizations led to the establishment of Cat Tien National Park, but there was insufficient on-the-ground management. Without effective patrols the rhinos in Cat Tien were poached, one after the other, and the last Javan rhino on the Asian mainland was killed in April 2010.
Of course, we can’t know what would have happened without publicity to the rhinos in Vietnam. Publicity is often needed to get political support and funding. But then again, what rhinos really need is effective protection. Effective protection happens through the work of committed individuals, and depends much less on major funding, government support, and big programs than conservation organizations would like us to believe.

It would have been so much better for Kalimantan’s last rhino if WWF had kept quiet about its findings. The rhino itself could have quietly gone about its business, and, if lucky, could maybe have lived another 20 years. Whilst conservation groups quietly continued surveys, without attracting anyone’s attention, it would have allowed them to develop effective conservation measures and strategies well before any public announcement was made.

I strongly urge WWF to take its responsibility for the last rhino of Kalimantan and accept accountability if it is poached in the near future. Now that the organization has benefited from the public attention it should take all measures possible to prevent this animal from being killed. More than anything, that involves committing to and implementing effective patrols in the area.

Ultimately, decisions will need to be made as to whether the only known rhino in Kalimantan needs to be protected in its habitat and how, or possibly caught and brought together with its few remaining conspecifics in captivity. Establishment of a new protected area, as was done in Vietnam, is unlikely to make much impact. A recent study shows that Kalimantan’s protected areas lose their forest as fast as timber concessions, indicating that effective management is largely absent. A highly dedicated organization with strong leadership and long-term presence in the area is needed to prevent this rhino from being killed.

It would be so disappointing if another bit of positive conservation news again turned into bad. I just hope WWF is ready and able to take on the challenge to prevent this from happening.

Erik Meijaard is a conservation scientist who has worked in Indonesia for more than 20 years, including TNC (The Nature Conservancy), WWF, the Center for International Forestry Research (CIFOR), and PNC International. Meijaard has an academic background in tropical ecology and a PhD in biological anthropology. The views expressed here are his own.