Tropical forests may be less sensitive to global warming than previously thought, argues a new study published in Nature Geoscience.

The research is based on computer simulations using 22 climate models for tropical forests in Africa, Asia, and the Americas. It projects loss of forest biomass as a result of climate change only in the Americas.

However the study is far from conclusive, with the authors listing several uncertainties about how tropical forests will respond to climate change.

“The big surprise in our analysis is that uncertainties in ecological models of the rainforest are significantly larger than uncertainties from differences in climate projections,” said lead author Chris Huntingford of the Centre for Ecology & Hydrology in the UK. “Despite this we conclude that based on current knowledge of expected climate change and ecological response, there is evidence of forest resilience for the Americas (Amazonia and Central America), Africa and Asia.”

In other words, the modeling suggests that forests may be less sensitive to die-off from climate change alone. Earlier projections using one of the same climate models — the HadCM3 developed by the UK Met Office’s Hadley Centre — forecast massive die-off in the Amazon by 2011, potentially tipping much of the world’s largest rainforest toward a drier, savanna-like ecosystem.

However forests are not out of the woods yet. Importantly, the study ignored the impacts of deforestation, forest degradation from logging, and fire on the resilience of tropical forests. Other research — including observations in Borneo and the Amazon — indicates these can exacerbate the effects of drier and warmer conditions.

The authors therefore note the importance of incorporating these factors into projecting the future of tropical forests.

“This study highlights why we must improve our understanding of how tropical forests respond to increasing temperature and drought. Different vegetation models currently simulate remarkable variability in forest sensitivity to climate change,” said David Galbraith from the University of Leeds. “And while these new results suggest that tropical forests may be quite resilient to warming, it is important also to remember that other factors not included in this study, such as fire and deforestation, will also affect the carbon stored in tropical forests. Their impacts are also difficult to simulate. It is therefore critical that modeling studies are accompanied by further comprehensive forest observations.” 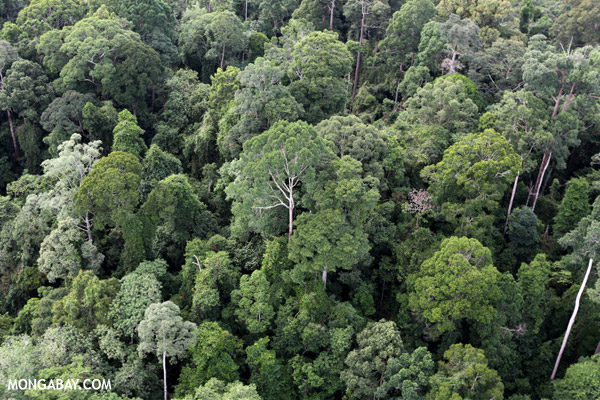 The paper comes a month after the publication of a Nature study that indicated faster plant growth due to higher concentrations of carbon dioxide may offset increased emissions from forest die-off in the tropics. The study also did not account for the effects of deforestation and forest degradation, nor methane emissions.

Other recent research has suggested a less optimistic view for tropical forests. Another Nature study, published last November, warned that trees worldwide are more vulnerable to drought-stress than previously thought, while advanced laser and chemical imaging in the Amazon — detailed last December — produced evidence of large-scale tree die-off in a remote part of the Amazon due to climate-driven drought conditions. The long-term implications of those findings remains unclear — the dead forest areas could rebound.

Carbon release, storage by rainforests may increase by 50b tons for each degree of climate warming in the tropics

(02/08/2013) Faster plant growth due to higher concentrations of carbon dioxide may offset increased emissions from forest die-off in the tropics, claims a new study based on climate modeling.