Providing high quality healthcare to communities around a rainforest park in Indonesian Borneo may be helping reduce chronic illegal logging, suggests a new assessment published by a conservation group.

The five-year impact assessment published by Indonesia-based Alam Sehat Lestari (ASRI) is based on surveys of nearly 1,500 households and 6,345 people living around Gunung Palung National Park in West Kalimantan. The study compares key health, economic, and conservation indicators to a baseline survey taken in 2007, prior to the launch of the project.

The survey finds across-the-board improvements in health indicators, including declines in infant mortality and common disease symptoms, increases in the rate of child immunizations, and a fall in the number of children per mother. It also reports increased environmental awareness and concern about deforestation in Gunung Palung, especially among members of communities participating in ASRI’s programs.

The approach, pioneered by ARSI and its U.S.-based affiliate Health In Harmony, is based on a simple concept: giving communities what they need in order to avoid cutting down the national park’s trees.

Illegal logging on the edge of Gunung Palung National Park. Photo by Rhett A. Butler

Initial surveys around Gunung Palung indicated that paying for healthcare expenses was one of the most important factors in whether community members engaged in illegal logging. Communities around the park are poor but generally can meet their day-to-day needs through agriculture. However when a family is suddenly afflicted with a serious illness or injury, the fastest way to get cash is to go into into the forest and cut down trees. Lack of effective and low-cost healthcare is therefore an indirect driver of deforestation in the area.

Understanding this, ASRI and Health In Harmony devised a program that offers inexpensive high-quality healthcare to anyone who needs it. But as an incentive to reduce illegal logging, communities that sign an agreement not to log get vastly subsidized healthcare. To ensure non-compliant communities aren’t priced out of cheap healthcare, ASRI offers alternative forms of payment that allow patients or their families to work on conservation-promoting projects, including an organic farm and seedling nursery, which is growing trees to be used in reforestation efforts. These non-cash forms of payments are paying surprising dividends: freed of costly chemical inputs, some farmers have seen a substantial boost in their incomes from organic vegetable farming. 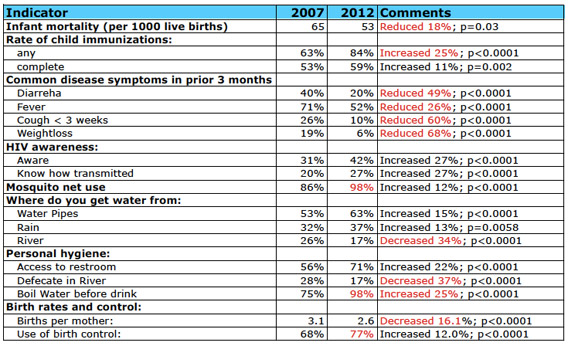 Some of the results from the assessment.

The results are partly reflected in the new survey, which shows widespread support of forest conservation among project participants and a sharp decline in the number of active loggers. Ninety-eight percent of community members believe that the program has decreased logging, while ASRI patients are “significantly less worried about affording health care (57% vs 73%) and accessing health care (57% vs 70%) than non-patients,” according to the group. Communities are also growing wealthier, suggesting that the decline in logging has not had a detrimental impact on incomes.

ASRI’s report quoted a village headman highlighting the positive outcomes of the program to date.

“Five years ago there were more than 100 people in my village doing illegal logging, now there are less than 10,” the report quoted local leader Pak Bastarin as saying during a speech to 300 villagers. “The effect I have seen of ASRI, is that loggers can become farmers without start up money because now they can make the fertilizer from the waste around them.” 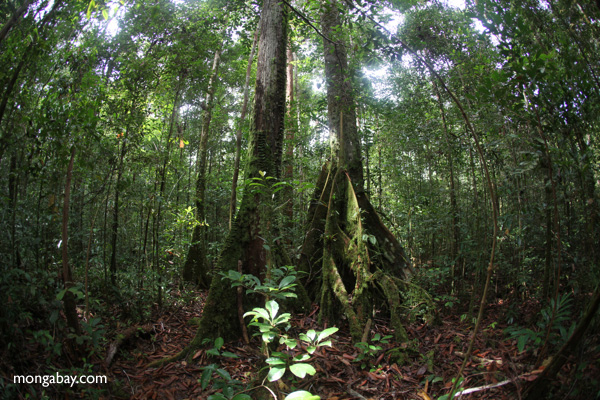 Health In Harmony founder Kinari Webb told mongabay.com that linking healthcare to conservation in poor areas is an effective model that could be applied beyond Borneo.

“In the area of Gunung Palung National Park, environmental destruction is strongly linked to poverty and poor health in local communities. Most people have little or no access to good healthcare or are unable to pay for treatment. Out of economic need, many communities participate directly in illegal logging or allow outsiders to log within the park near their villages. The destruction of the national park perpetuates the cycle that links poverty, poor health, and forest loss in the region by destroying an important watershed, resulting in floods, and likely by increasing rates of malaria and other illnesses,” she told mongabay.com in a 2008 interview.

“We believe that healthcare incentives, as well as conservation-promoting work opportunities, provide an excellent, powerful means to break the cycle that links poverty, poor health, and environmental destruction around Gunung Palung,” she continued. “Health In Harmony’s long-term goal is that the ASRI model be replicated in other areas where natural areas are under siege and local communities feel the negative effects of environmental destruction. Our vision is that planetary health will be improved and protected if the Alam Sehat Lestari model is employed around the world.”

Health In Harmony and ASRI are now planning to expand to an entirely different ecosystem and region: the coral reefs of Indonesia’s West Papua, the western-most part of the island of New Guinea. The local needs however are the same: effective and affordable healthcare. Meeting this need could help preserve the region’s stunning marine biodiversity, including coral reefs, mangrove forests, and seagrass communities.

(05/14/2011) The co-founder of an initiative that discourages illegal logging by bringing affordable, high quality health care to impoverished communities in Indonesian Borneo has been recognized with a prestigious conservation award.

The role of wildlife conservation in human health

(09/07/2010) Livestock farming is an important traditional way for communities in sub-Saharan Africa to build and maintain wealth, as well as attain food security. Essentially, the transfrontier or transboundary conservation areas (TFCA) concept and current internationally accepted approaches to the management of transboundary animal diseases (TADs) are largely incompatible. The TFCA concept promotes free movement of wildlife over large geographic areas, whereas the present approach to the control of TADs (especially for directly transmitted infections) is to use vast fences to prevent movement of susceptible animals between areas where TADs occur and areas where they do not, and to similarly restrict trade in commodities derived from animals on the same basis. In short, the incompatibility between current regulatory approaches for the control of diseases of agro-economic importance and the vision of vast conservation landscapes without major fences needs to be reconciled in the interest of regional risk-diversification of land-use options and livelihood opportunities. An integrated, interdisciplinary approach offers the most promising way to address these issues—one where the well-being of wildlife and ecosystems, domestic animals, and Africa’s people are assessed holistically, with a “One World – One Health” perspective.

Saving gorillas by bringing healthcare to local people in Uganda, an interview with Dr. Gladys Kalema-Zikusoka

(09/16/2009) How can bringing healthcare to local villagers in Uganda help save the Critically Endangered mountain gorilla? The answer lies in our genetics, says Dr. Gladys Kalema-Zikusoka, wildlife veterinarian and director of Conservation through Public Health (CTPH). “Because we share 98.4% genetic material with gorillas we can easily transmit diseases to each other.” Therefore, explains Kalema-Zikusoka “our efforts to protect the gorillas will always be undermined by the poor public health of the people who they share a habitat with. In order to effectively improve the health of the gorillas we needed to also improve the health of the people, which will not only directly reduced the health threat to gorillas through improvement of public health practices, but also improved community attitudes toward wildlife conservation.”

(12/08/2008) Health in Harmony was today awarded mongabay.com's annual "Innovation in Conservation" award for its unique approach to conservation which combats illegal logging by providing healthcare and sustainable livelihoods to communities living around Gunung Palung National Park in Kalimantan, on the island of Borneo. The award includes a cash grant and prominent placement on the mongabay.com web site and newsletter for the month of December. Health in Harmony is working to break an impoverishing cycle of illegal logging and deforestation by offering healthcare rewards to encourage the villagers to protect the national park, rather than log it. The effort seems to be paying off: since launching a 'forests-for-healthcare' incentive program in September, 18 of 21 communities have signed a moratorium of understanding agreeing to participate.