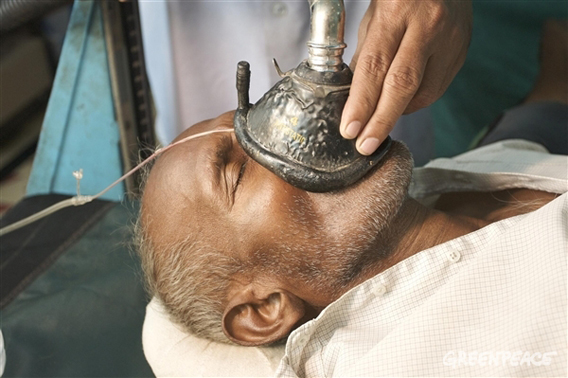 Bhagwat Saw, 69, in hospital after he was diagnosed with pneumoconiosis. He has been working as a coal loader for over 40 years. © Peter Caton / Greenpeace.

India’s dependence on coal-fired power plants for energy may be leading directly to the deaths of 80,000 to 115,000 of its citizens every year, according to the first ever report on the health impacts of coal in the country. The report, commissioned by the Conservation Action Trust and Greenpeace-India, deals only with the direct health impact of coal and not climate change. But even ignoring the rising pain of global warming, the bleak report outlines that coal consumption in India is causing over 20 million asthma attacks, nearly a million emergency room visits, and killing some 10,000 children under five annually.

“Perhaps the most shocking fact to be brought to light is that India lags far, far behind most large economies when it comes to regulating pollutants from coal power plants,” Ashish Fernandes with Greenpeace wrote in a blog. “India’s standards for particulate matter (150-350 µg/m3) are much weaker than even China’s (20-50 µg/m3), whose coal binge led to record pollution levels and public outrage this past winter. For sulphur, nitrogen dioxides and mercury, India has NO standards in place.”

The health impacts of burning coal have long-been studied by scientists.

The economic toll of coal-linked health issues is massive, according to the report, costing the Indian government and people some $3.3 to $4.6 billion annually.

Currently 66 percent of India’s power comes from burning coal and the nation has proposals out to build 455 more coal-fired plants. Coal companies are also targeting forests for massive open-pit mines, including forests home to endangered tigers and elephants.

“Ultimately, the government and citizen groups need to demand clean power, keeping in mind the health impacts of the emissions from power plants in India,” the report concludes, calling on investment in renewable energy and strict environmental laws on standing coal plants.

In addition to its public health impacts, coal is also the most carbon-intensive energy source. According to the report, India’s 111 largest coal power plants currently produces 665 million tons of carbon dioxide annually. During international climate change conferences India has strongly argued that industrial nations must meet their historic obligations (the U.S. is the world’s largest emitter historically) by cutting emissions rapidly. But political pressure is also rising on India, as well as China, to recognize their outsized role in the fact that global greenhouse emissions continue to rise, even as they dip in the U.S. and EU. India is currently the world’s third largest emitter after China (number one) and the U.S. (number two). Ironically, none of the top three emitters have comprehensive legislation in place to tackle their emissions.

Coal is not necessary for India, Fernandes writes, “taken together, solar and wind power have the potential to meet India’s energy needs several times over.”

Still, he told Climate Wire that the government has yet to wake-up to the full potential of solar and wind.

“The government is still stuck on seeing coal as the answer to India’s energy needs,” he said. “Until we actually get people to start seeing the actual cost of what that entails, it’s going to be an uphill battle.”

Mercury hurts birds and people: what we can learn from studying our feathered friends

(01/07/2013) Birds aren’t that different from people. We learn from our parents, just like zebra finches learn songs from their fathers. We are active and noisy during the day, like birds, and we can also be territorial. Also like birds, we try to attract mates through colorful displays and beautiful songs. Birds are sensitive to pollution in their environment just like we are: harmful elements such as mercury wreak similar havoc on human and bird biology alike. Because our species share so many attributes, studying birds illustrates the connections between them and us.

(12/05/2012) A new analysis finds that 21 wealthy countries spent five-times more on subsidizing fossil fuels in 2011 than they have on providing funds for poor nations to cut greenhouse gas emissions and adapt to the impacts of climate change. The analysis, by Oil Change International, comes in the midst of the current UN Climate Summit held in Doha, Qatar; progress at the talks has been stymied due to the gulf between poor and rich nations, including on the issue of climate financing.

(08/01/2012) A shift away from coal and reduced gasoline demand coupled with a mild winter led to an 8 percent drop in U.S. carbon dioxide emissions during the first quarter of 2012, reports the Energy Information Administration. Emissions between January and March 2012 were the lowest since 1992.