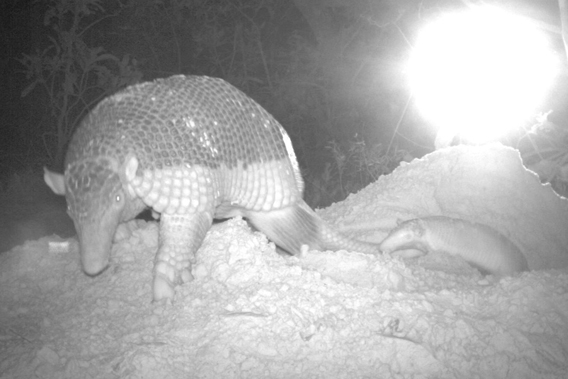 Despite weighing as much as full-grown human, almost nothing is known about the giant armadillo (Priodontes maximus) including its breeding and reproductive behaviors. How does mating occur? How long does pregnancy last? How many babes are typically born? Scientists are simply in the dark, but a ground-breaking study employing camera traps is beginning to change this. For the first time, scientists in the Brazilian Pantanal have documented giant armadillo breeding and the happy outcome: a baby giant armadillo (see video and more photos below).

“Being part of this exclusive moment in the history of this species conservation and seeing the first picture of a baby giant armadillo was one of the most exciting moments of my career as a wildlife professional,” said Danilo Kluyber, a wildlife veterinarian with The Pantanal Giant Armadillo Project.

Although by far the world’s biggest armadillo—weighing around 110 pounds(50 kilograms)—the giant armadillo’s rarity along with its nocturnal and burrowing lifestyle has meant it has long eluded the gaze of science. In fact in some parts of its range the giant armadillo is considered more myth than substance. The Pantanal Giant Armadillo Project, which began in 2010, however is slowly but surely bringing light to the massive mammal.

Following a female giant armadillo with remote camera traps, the project began noticing a male in photos in January of last year. Romance bloomed much as it does with humans, with the lovesick male even visiting some of the female’s unoccupied burrows. Six months later, the male and female moved in together. They stayed together for a few days until the male disappeared.

“Our team believed she was getting bigger, but honestly this was more wishful thinking than anything else,” says Project Coordinator, Arnaud Desbiez, who told mongabay.com in 2011 that his dream was to catch a baby giant armadillo on film.

Five months after her co-habitation with the male, the team noticed that the female was sticking to just one burrow, which is unusual for a giant armadillo who likes to move from burrow-to-burrow. Three weeks later the team finally learned the reason why: a camera trap photographed the nose of a baby giant anteater poking out from the burrow. Later, the project photographed the baby as it moved with its mother to a new burrow for the first team (see photos). The team believes the little giant was then four weeks old.

“This illustrates the importance of long-term studies and a dedicated hard working team in order to gather the necessary information to conserve this rare species,” says Desbiez. This experience along with tracks have led researchers to believe that giant armadillos probably only give birth to one baby at a time, which adds greater concern that this large mammal may not recover from hunting and habitat loss.

“Giant armadillos can go locally extinct without anyone noticing. Giant armadillos occur at low population densities, are secretive, nocturnal and can easily go undetected,” the project writes in a press release. “In our study area in the Pantanal, many of the local people, some of them living in the area for their whole lives, have ever seen these animals. We simply know nothing about giant armadillos and may lose the species before we can understand its basic natural history and ecological role.”

By gathering the first good data on this unknown species, the Pantanal Giant Armadillo Project is hoping to provide insight into how to better conserve the shy giant.

“Documenting the birth of a giant armadillo is an exciting step forward to helping us better understand the biology and reproduction of this cryptic species and ultimately help us conserve it,” concludes Desbiez. 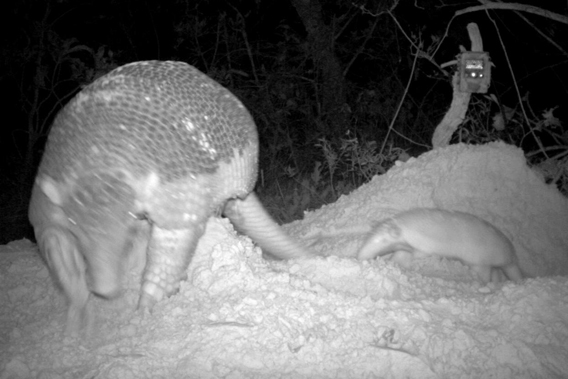 Another view of mother giant armadillo with baby in Baia des Pedras. Photo by: The Pantanal Giant Armadillo Project. 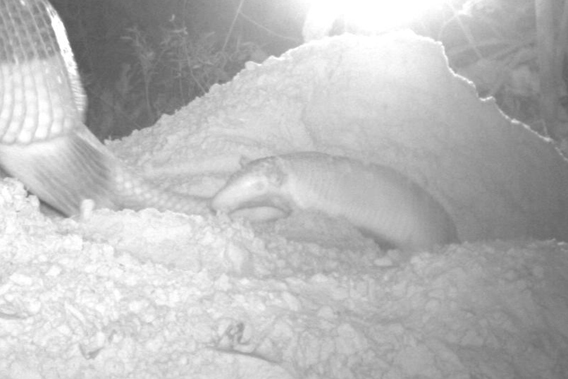 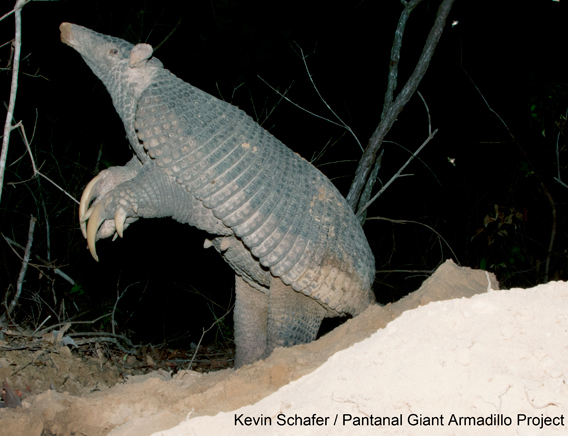 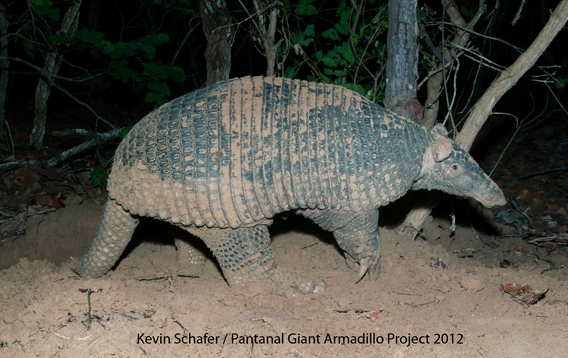 (02/14/2013) The world’s largest study of wildlife using remote camera traps has captured one million photographs. The project, known as the Tropical Ecology Assessment and Monitoring (TEAM) Network, takes photos of mammals and birds in 16 protected areas across 14 tropical countries in Asia, Africa, as well as Central and South America. Remote camera traps, which take stealth photos of wildlife when no humans are around, have become an increasingly important tool in the conservationists’ toolbox, allowing researchers to monitor otherwise hard-to-find animals in remote and often punishing locations.

Chasing down ‘quest species’: new book travels the world in search of rarity in nature

(02/13/2013) In his new book, The Kingdom of Rarities, Eric Dinerstein chases after rare animals around the world, from the maned wolf (Chrysocyon brachyurus) in Brazil to the golden langur (Trachypithecus geei) in Bhutan to Kirtland’s warbler (Setophaga kirtlandii) in the forests of Michigan. Throughout his journeys, he tackles the concept of rarity in nature head-on. Contrary to popular belief, rarity is actually the norm in the wildlife world.

(02/07/2013) In my childhood’s biology books from the 50’s, the Australian marsupial tiger Thylacine is classified rare but alive. Today we know that the last thylacine died in a Tasmanian zoo 7th September, 1936, after a century of intensive hunting encouraged by bounties. The local government had finally introduced official protection 59 days before the last specimen died. Despite the optimism in my old books, no more thylacines were ever found. No film of it in the wild exists.