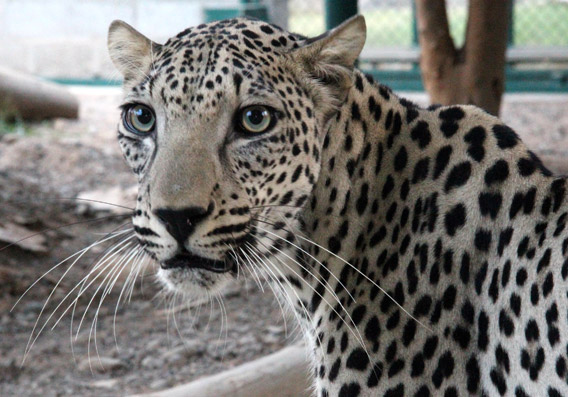 Sharjah, a captive Arabian leopard at the Sharjah Wildlife Centre in the UAE. Photo by Kevin Rushby

Today most people are more likely to associate Yemen with warfare and bizarre terrorism plots rather than wildlife. But Yemen is home to a surprising diversity of animals, including a population of the world’s smallest leopard: The Arabian leopard (Panthera pardus nimr).

Native to the Arabian Peninsula, the Arabian leopard is today extremely rare — less than 200 animals are thought to survive in the wild. Despite the cat’s precarious position, there is relatively little local enthusiasm to protect a species that is widely seen as a threat to livestock.

Nevertheless one man in Yemen is trying to boost the value of leopard in the eyes of local people. David Stanton, an American teacher living in Yemen, had devoted his life to saving the Arabian leopard across its range.

Now a new film tells Stanton’s story. Written and directed by Guardian journalist and correspondent Kevin Rushby and long-time film producer Richard Johns, Saving the Leopard follows Stanton as he travels with a group of young Yemenis to Oman to train them in leopard conservation.

Saving the Leopard is debuting February 2, 2013 at the 3rd Annual New York Wildlife Conservation Film Festival. Ahead of its premiere, Rushby answered some questions from Mongabay.com about the film and his career, which has included television production and presenting, travel writing and reporting, and authorship of several books. Rushby is an Arabic speaker who has covered the Middle East for 20 years, including stints living and working in Yemen and Sudan.

AN INTERVIEW WITH KEVIN RUSHBY

Kevin Rushby: The film making is recent. I’ve always been a photographer and have illustrated my written work in the newspaper for many years. When the story idea for Saving the Leopard came to me, I teamed up with an experienced film maker, Tom Evans, and producer, Richard Johns to make Think Tank Films. I learned a lot from both of them and have also started filming and producing my own material for The Guardian. For example: A taxi driver’s tour of Durban, South Africa – video

With Think Tank Films I’ve also gone on to make two films in Kenya addressing environmental concerns about Maasai land issues and the collecting of rare plants. These are both available online:

Mongabay.com: Why did you choose the Arabian leopard as a subject?

Kevin Rushby: What drew me to this was the fact that it is an animal that many people don’t even know exists. Not only that but it is in a country with almost no environmental protection record. I knew immediately that this combination, together with committed and interesting characters, would make a great story.

Kevin Rushby: An American teacher called David Stanton who was living in Yemen decided to devote his life to saving the Arabian leopard. He knew it was a Herculean task but he is a particularly enthusiastic and optimistic character with a real love for Yemen and its people. The film starts with David persuading various local men to get interested in the idea of leopard conservation. There were two guys who stood out as characters: Ibrahim al-Wahdi and Nasser al-Milhani. We followed their preparations to go on a training course in Oman where they’d learn a bit about the work that goes into conservation. Since both these men were from rural backwaters, it was a fantastic experience to see them go on their first trip abroad and then find that they had skills and knowledge that were truly valued in the wider world.

Kevin Rushby: Yemen is a very challenging place to film. I think at one point we had 26 soldiers and two armed vehicles protecting us from… well, we never found out quite what it was. But for me the long treks we did in Oman in the most remote and uninhabited desert mountains were incredible experiences. There was one spot where we found ourselves walking along a ledge on a cliff a thousand feet above the sea, following leopard tracks in the dust. 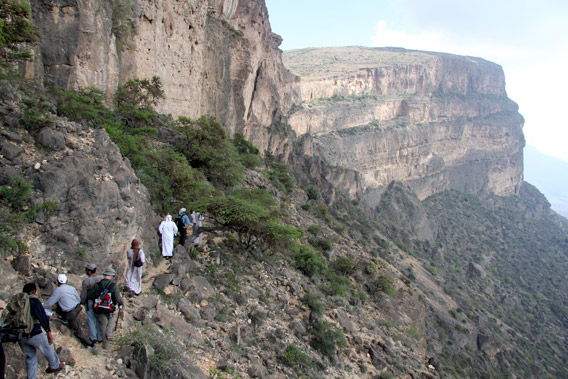 Kevin Rushby: The biggest thing is for people inside Yemen to become aware that they have an environment worth protecting and saving. So often people think that conservation is someone else’s problem, but we must all examine our own backyards and think what we can do. Me too!

Kevin Rushby: This is the first film festival showing.

Kevin Rushby: I’ve got various things in the pipeline: filming in the Middle East again later this year, other assignments to Peru and Papua New Guinea.