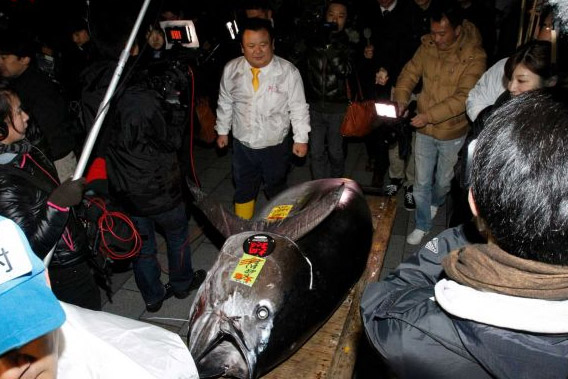 A bluefin tuna sold for a record $1.76 million at an auction in Tokyo, Japan Saturday, reports the Associated Press.

In the first auction of the 2013 at Tokyo’s Tsukiji fish market, a 222-kilogram (489-pound) sold for 155.4 million yen, or $3,603 per pound. The total price is nearly three times the previous record of 56.4 million yen, which was set last year. In both cases the top bidder was Kiyoshi Kimura, president of Kiyomura Co., which runs the Sushi-Zanmai restaurant chain.

The first auction of the year is generally viewed as a publicity stunt, with the first fish fetching a price far above the normal market rate. Nonetheless, the rising price of bluefin tuna reflects the increasing scarcity of the species, which environmentalists say is being overfish for Japan’s sushi demand. About 80 percent of the world’s bluefin tuna catch ends up in Japan.

According to the International Commission for the Conservation of Atlantic Tunas (ICCAT), global bluefin tuna stocks have plunged in recent decades, with the population in the Eastern Atlantic dropping 72 percent and the Western Atlantic 82 percent. The population of the Southern Bluefin is down by roughly 95 percent. Other tuna stocks have also fallen significantly since 1990. 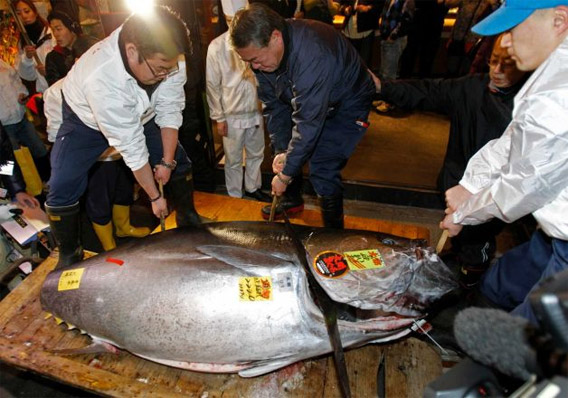 (01/10/2011) Greenpeace has ranked the canned tuna corporation Princes as the most environmentally damaging tuna brand in the U.K., citing that the Japanese company uses destructive fishing methods and that its claims of sustainability are blatantly untrue.

(01/06/2011) On Tuesday, a 752-pound Pacific bluefin tuna was sold at Japanese auction for the highest price ever received for raw seafood – $396,000. The price tops the previous record by more than $100,000 and comes at a time when tuna populations around the world are experiencing precipitous declines.

(12/31/2010) During a meeting earlier this month, the Western and Central Pacific Fisheries Commission (WCPFC) disregarded appeals from the EU and Japan, as well as from Commission scientists, calling for a substantial and immediate reduction in catch rates of bigeye and yellowfin tuna in response to diminished stocks. An earlier meeting of the International Commission for the Conservation of Atlantic Tunas (ICCAT) resulted in only cosmetic cuts to Atlantic bluefin quotas, calling into question the ability of the global system of Regional Fisheries Management Organizations (RFMOs) to prevent overfishing.

(12/01/2010) So far over 14,000 people have pledged to boycott eating bluefin tuna or visiting any restaurant that serves the imperiled species. The boycott, begun by US-conservation organization Center for Biological Diversity (CBD), is striving to raise awareness about a species that many scientists say is being fished to the brink of extinction.

History repeats itself: the path to extinction is still paved with greed and waste

(04/05/2010) As a child I read about the near-extinction of the American bison. Once the dominant species on America’s Great Plains, I remember books illustrating how train-travelers would set their guns on open windows and shoot down bison by the hundreds as the locomotive sped through what was left of the wild west. The American bison plunged from an estimated 30 million to a few hundred at the opening of the 20th century. When I read about the bison’s demise I remember thinking, with the characteristic superiority of a child, how such a thing could never happen today, that society has, in a word, ‘progressed’. Grown-up now, the world has made me wiser: last month the international organization CITES (Convention on International Trade in Endangered Species) struck down a ban on the Critically Endangered Atlantic bluefin tuna. The story of the Atlantic bluefin tuna is a long and mostly irrational one—that is if one looks at the Atlantic bluefin from a scientific, ecologic, moral, or common-sense perspective.