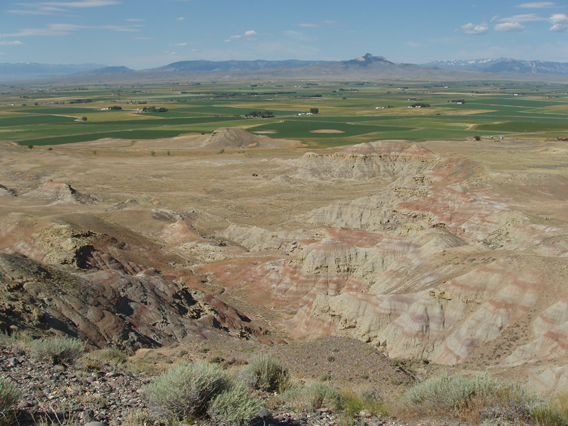 View of Bighorn Basin in Wyoming, showing the sediments which scientists drill through. Photo courtesy of Phillip Jardine.

Sandy, Irene, Katrina… Hurricanes are fast becoming household names and have many people worried over the connection between extreme weather and the amount of greenhouse gases people are pumping into the atmosphere. No one can predict for sure what will happen decades or centuries from now as such gas concentrations increase. But scientists have a pretty good picture of what did happen in the past; greenhouses gases were released into the atmosphere in massive amounts at least once before—around 56 million years ago.

Sixty million years ago the Earth was already at least a few degrees warmer than it is today. At that point, there was little or no ice at the poles, and alligators were probably swimming in areas where polar bears roam today. But 4 million years later (56 million years ago) the world was about to undergo major change—in an event called the Paleocene-Eocene Thermal Maximum (PETM). During the PETM, massive amounts of greenhouse gases, probably in the form of methane that later oxidized to carbon dioxide, were spewed into atmosphere.

Scientists are still uncertain as to what had caused the release, but they do know that it happened in a short time period—probably a few thousand years. This CO2 explosion is similar to the one being produced by people now, which is why it is of such interest to scientists.

“The amount of carbon released in the PETM is thought to be similar to if we burn all of our fossil fuel reserves,” says Phillip Jardine, who is studying the effects of PETM on plants as part of the Bighorn Basin Coring Project (BBCP) in Wyoming.

Together with the massive carbon release, the PETM is marked by another distinct feature—a rise of 5-8 degrees Celsius in global temperatures, a rise scientists say would be catastrophic for human civilization today.

“The PETM is especially valuable to climate scientists to understand better how the climate system actually works, and especially how releasing carbon impacts on temperatures,” says Dr. Jardine. “The PETM studies have shown the link between the two very nicely, with rapid shifts in both the carbon cycle and global temperatures.”

So, instead of trying to predict what happens when massive amounts of CO2 are released into the atmosphere, scientists can look at the past and see what actually did happen.

The BBCP is a collaboration of 30 scientists around the world and aims to find new evidence about changes in the carbon cycle, climate, and plant life during the PETM. In August of 2011, scientists completed drilling for the project and extracted cores—columns of earth. Like the cross section of a layered cake, these 250-meter columns have colored bands of earth, which reveal the Earth’s history spanning hundreds of thousands of years. About 50 meters of the cores’ sediment was formed during the PETM.

Scientists are still analyzing data from the project. However, they do know that many plant types shifted their geographic ranges, sometimes by thousands of kilometers, in response to the massive climate changes of the period.

“Many of the plant types that were present during the late Paleocene (birches, walnuts, elms, bald cypress) either moved out or became rare during the PETM,” says Dr. Jardine. Seeking cooler temperatures, these plants probably migrated to higher latitudes. “We see movements to higher latitudes and that is consistent with an interval of global warming.”

Previous studies show that ocean temperatures also rose during this time—by as much as 8 degrees in some areas. Ocean waters also became more acidic and Bighorn Basin was frequently flooded by overflowing rivers.

The effects of massive carbon release are not limited to the past. If people continue to produce carbon dioxide at the current rate, in less than 300 years, the levels of CO2 could reach levels last present on Earth 50 million years ago. It took over 150,000 years for all that carbon dioxide to be reabsorbed and for Earth to return to pre-PETM conditions, a time scale which would be catastrophic for people.

“The PETM does show that the after effects can last far longer than the period of carbon release, and on a human time scale this could result in very different climatic conditions for many, many generations to come,” says Jardine. 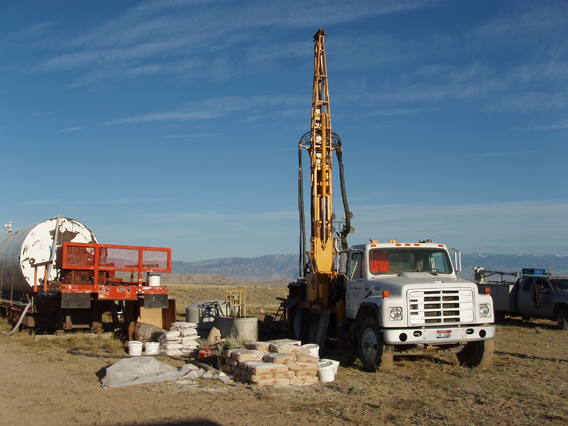 Current carbon releases faster than at any time on record

(06/13/2011) The Paleocene-Eocene Thermal Maximum (PETM), a period of global warming that occurred nearly 56 million years ago due to massive releases of greenhouse gases, is frequently referenced as an analogue for projected climate change. However, recent findings suggest the current rate of carbon release is almost 10 times as rapid as at the peak of the PETM—and that biological systems may be significantly less able to adapt.

(02/16/2008) If carbon dioxide emissions from the burning of fossil fuels continue on a “business-as-usual” trajectory, humans will have added about 5 trillion metric tons of carbon to the atmosphere by the year 2400. A similarly massive release of carbon accompanied an extreme period of global warming 55 million years ago known as the Paleocene-Eocene Thermal Maximum (PETM).

(04/26/2007) Scientists have linked a sharp spike in ocean temperatures 55 million years ago to massive volcanic eruptions that created the North Atlantic Ocean when Greenland and northwestern Europe separated.

Past global warming suggests massive temperature shift in our future

(12/07/2006) If past climate change is any indication, Earth could be in store for some significant global warming according to research published in the December 8, 2006, issue of the journal Science. The work suggests that climate change skeptics may be fighting a losing cause. The study, led by Mark Pagani, associate professor of geology and geophysics at Yale, looked at an episode of rapid climate change that occurred some 55 million years ago. Known as the Paleocene-Eocene Thermal Maximum (PETM), the period was marked by a rapid rise in greenhouse gases that heated Earth by roughly 9 F (5 C), in less than 10,000 years. The climate warming caused widespread changes including mass extinction in the world’s oceans due to acidification and shifts of plant communities due to changes in rainfall. The era helped set the stage for the “Age of Mammals,” which included the first appearance of modern primates.

(11/24/2006) New research suggests that Earth’s greatest mass extinction did more than wipe out an estimated 95% of marine species and 70% of land species; it fundamentally changed the ecology of the world’s oceans. The study, published in tomorrow’s issue of the journal Science, found that ‘ecologically simple marine communities were largely displaced by complex communities’, a shift that continues has continue since.

(08/11/2006) Scientists have uncovered new evidence of dramatic changes in humidity, precipitation levels, temperature, and ocean water salinity during a past episode of global warming. Analyzing plant fossils collected in the Arctic, a team of researchers led by Mark Pagani, professor of geology and geophysics at Yale University, found that water and atmospheric water vapor are a major indicator of the greenhouse changes.