Fires burn over a third more land than estimated 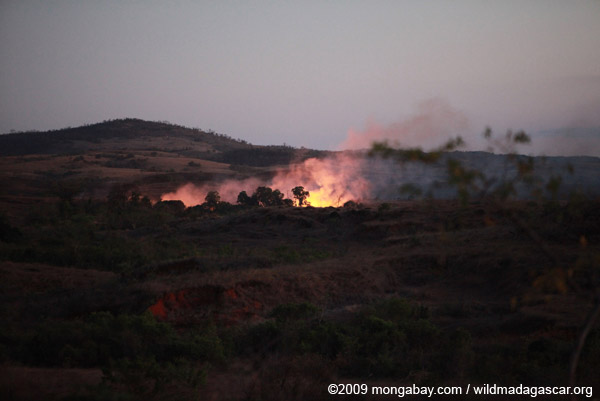 Bush fire in Madagascar. Photo by: Rhett A. Butler.

Scientists currently detect fires around the world using moderate resolution satellite imagery, however a new study in the Journal of Geophysical Research finds that this tool misses many of the world’s smaller fires, which add up.

The researchers found that while small fires did not overwhelm fire estimates in boreal forests or the savannas of Africa and Australia, they markedly added to estimates in tropical forest regions. Just be incorporating small fires, fire estimates estimates jumped 90 percent in Southeast Asia, 143 percent in Central America, and 157 percent in Equatorial Asia. In the U.S., the land area burned by fire jumped 75 percent when small conflagrations were incorporated.

(09/09/2012) Already facing an onslaught of threats from logging and conversion for agriculture, forests worldwide are increasingly impacted by the effects of climate change, including drought, heightened fire risk, and disease, putting the ecological services they afford in jeopardy, warns a new paper published in the journal Nature Climate Change.

Pictures of the day: NASA captures stunning images of U.S. wildfires at night

(08/21/2012) NASA is now able to capture satellite images of wildfires—at night. Using the The Suomi National Polar-orbiting Partnership satellite (S-NPP), which has instruments that are particularly sensitive to light, NASA was able to take images of fires burning nocturnally across the American West in what has been a record year, to date, for fires in the country.