Lessons From Sandy: extreme weather will be the new normal

In a recent forum held at the Harvard School of Public Health four expert panelists discussed the most important lessons learned from Hurricane Sandy.

Daniel Schrag, climate scientist and Director of the Harvard Center for the Environment said that “hurricane Sandy has been connected by the public to climate change in a way that other storms have not”.

This storm has brought the conversation of our vulnerability and need for adaptation to climate change back to the table.

Schrag explained that even if Sandy was thought to be an unusual event, storms like this one will become more frequent due to global warming and climate change. “Sandy got stronger as it moved from the Carolinas up to New Jersey, when it should have been the opposite”. Normally storms weaken when they move north. Water at that time of year is usually pretty cold and storms should disperse when coming into contact with the chilly waters. But the water temperature off the coast of New Jersey on October 29th was 4C warmer than normal. This pool of warm water gave the storm and extra kick bringing it from 75 mph to 90mph. 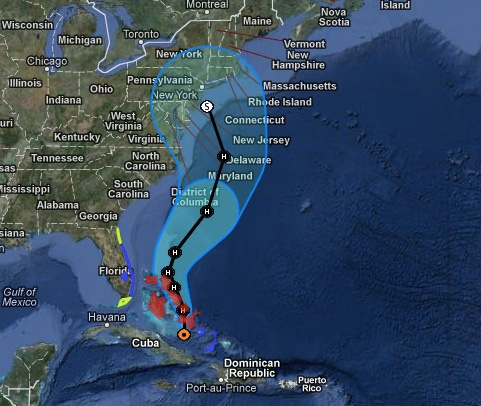 The panel also explained that super storms like Sandy might hit the Northeastern US more frequently that before due to increased melting of the Greenland ice caps.

The hurricane took a left turn at the Jersey shore, which is quite rare. Less than 10% of storms move from east to west, normally they would head north and move eastwardly out to the sea. The hypothesis is that the retreat of Arctic sea ice and melting of Greenland are in fact steering storms towards the Northeastern coast of the US.

“If this proves to be the case, if we really are starting to steer storms towards the East coast, that’s a much bigger deal than any kind of intensification. We have a lot of storms per year, so this could be really bad.” Schrag said.

Jerold Hayden, professor of Urban Planning at Harvard University agreed with Schrag that after natural disasters “we rebuild, but we don’t necessarily rebuild better”. We need to start spending money today if we want to prepare for the next storms and sea level rise of the future, and we need to tell people not to develop where they where developing before.

The panel agreed that “immediate post Sandy is an incredible opportunity in terms of thinking of what kind of investments to make in order to make our systems more robust.” Many of these measures can be simple and localized. Rising power supplies to higher floors, or adding pumps in place so that we can pump out water from flooded areas in a day or two after a storm are local ways to achieve more resilience.

Schrag warned to those relying too much on technology and predictions that “however good our models are in predicting storms, I promise there will be surprises. No matter how well prepare, there are going to be brakes”.

The panel agreed that Sandy is just the beginning of a new climate era. Extreme weather is going to be the new normal, and these experts argue we must adapt to this new reality if we don’t want to end up with water up our necks.

(11/14/2012) At a news conference today, a question by New York Times reporter Mark Landler pushed President Obama to speak at some length about climate change. In his answer, Obama re-iterated his acceptance of climate science and discussed how progress on tackling climate change might proceed in his second term, though he also noted that he wouldn’t put action on the climate ahead of the economy. President Obama made a small reference to climate change in his victory speech following his historic re-election last Tuesday, but his answer today was the most the president has talked about the issue at any length since at least Hurricane Sandy.