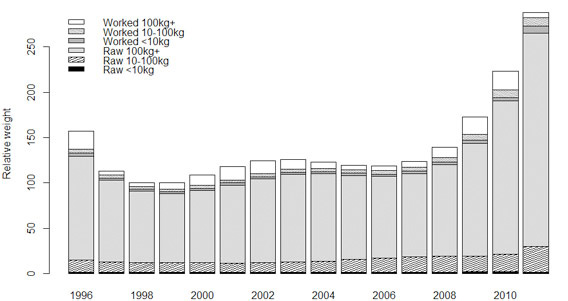 Deforestation for an industrial rubber plantation in Laos. Photo by Rhett A. Butler

Ivory smuggling surged in 2011, reaching its highest levels in nearly 20 years, says a new report released by the Convention on International Trade in Endangered Species of Wild Fauna and Flora (CITES).

The report is based on data from the Elephant Trade Information System (ETIS), a database of elephant product seizure records dating back to 1989. The data analysis was conducted by the University of Reading in collaboration with TRAFFIC, which manages ETIS.

The report found that some 38.8 metric tons of elephant ivory was seized in 2011, an increase of 48 percent over 2010. There were 17 seizures of more than 800 kilograms, an increase from nine in 2010 and an indication of increasing sophistication of criminal networks in the ivory trade, according to Tom Milliken of TRAFFIC.

“Right now, criminals are lining their pockets while Africa’s Elephants are paying the ultimate price.” The Wildlife Conservation Society estimates that 30,000 African elephants were killed in 2012 to supply the ivory trade.

The report shows that Thailand and China are the biggest markets for illegal ivory, although China’s demand dwarfs that of Thailand. Kenya and Tanzania are the dominant export points for African ivory, while Malaysia, Philippines, Hong Kong and Viet Nam are key transit countries.

The Elephant Trade Information System (ETIS) and the Illicit Trade in Ivory: A report to the 16th meeting of the Conference of the Parties to CITES [PDF] (2012).