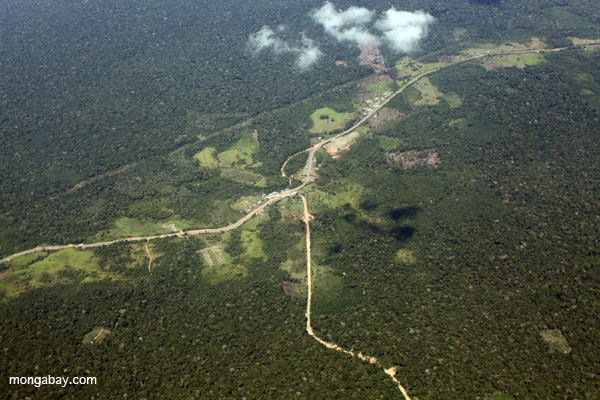 The Amazon Basin has 96,500 kilometers of roads, nearly two-thirds of which are unpaved, reports a comprehensive new atlas of the region, which contains the world’s largest rainforest.

The report, published in Spanish by the Amazonian Network of Georeferenced Socio-Environmental Information (RAISG), a group of 11 civil society organizations and research institutions across eight countries and one department, was released this week to coincide with climate talks in Doha where tropical forests — especially the Amazon — have been center stage for their potential role in helping mitigate climate change.

The atlas finds that 71 percent of the region’s roads are in Brazil, followed by Peru (6.2 percent) and Bolivia (4.5 percent). French Guiana has the fewest. Ecuador has the highest density of roads, most of which are used for oil exploration.

The report highlights roads due to their traditional high correlation with deforestation. Roads grant access to settlers, land speculators, ranchers, farmers, and illegal miners and loggers. Roads are often built by extractive industries that themselves drive deforestation: mining, energy exploitation, and commercial logging.

The report notes several recent road projects that have raised concerns among environmentalists and indigenous rights groups. For example, the Transoceánica that now links the Brazilian Amazon to Pacific ports in Peru has been linked to a sharp increase in logging and mining in Peru’s Madre de Dios region. Meanwhile a controversial road project in Bolivia would have bisected the TIPNIS forest zone that is an important area for indigenous groups and conservation until it was canceled earlier this year.

The atlas also highlights other developments in the Amazon, including expansion of oil and gas exploration and extraction, a proliferation in hydroelectric projects, and a mining boom.

(09/06/2010) Scientists using a combination of satellite imagery, airborne-laser technology, and ground-based plot surveys to create three-dimensional high resolution carbon maps of the Amazon rainforest have documented a surge in emissions from deforestation and selective logging following the paving of the Trans-Oceanic Highway in Peru. The study, published this week in the early edition of the Proceedings of the National Academy of Sciences, reveals that selective logging and other forms of forest degradation in Peru account for nearly a third of emissions compared to deforestation alone.

Roads are enablers of rainforest destruction

(09/24/2009) Chainsaws, bulldozers, and fires are tools of rainforest destruction, but roads are enablers. Roads link resources to markets, enabling loggers, farmers, ranchers, miners, and land speculators to convert remote forests into economic opportunities. But the ecological cost is high: 95 percent of deforestation in the Brazilian Amazon occurs within 50-kilometers of a road; in Africa, where logging roads are rapidly expanding across the Congo basin, the bulk of bushmeat hunting occurs near roads. In Laos and Sumatra, roads are opening last remnants of intact forests to logging, poaching, and plantation development. But roads also cause subtler impacts, fragmenting habitats, altering microclimates, creating highways for invasive species, blocking movement of wildlife, and claiming animals as roadkill. A new paper, published in Trends in Evolution and Ecology, reviews these and other impacts of roads on rainforests. Its conclusions don’t bode well for the future of forests.

(09/13/2009) The documentary Crude opened this weekend in New York, while the film shows the direct impact of the oil industry on indigenous groups a new study proves that the presence of oil companies can have subtler, but still major impacts, on indigenous groups and the ecosystems in which they live. In Ecuador’s Yasuni National Park—comprising 982,000 hectares of what the researchers call “one of the most species diverse forests in the world”—the presence of an oil company has disrupted the lives of the Waorani and the Kichwa peoples, and the rich abundance of wildlife living within the forest.

(03/12/2008) Unofficial road-building will be a major driver of deforestation and land-use change in the Amazon rainforest, according to an analysis published in Philosophical Transactions of the Royal Society B. Improved governance, as exemplified by the innovative MAP Initiative in the southwestern Amazon, could help reduce the future impact of roads, without diminishing economic prospects in the region.

Chinese economy drives road-building and deforestation in the Amazon