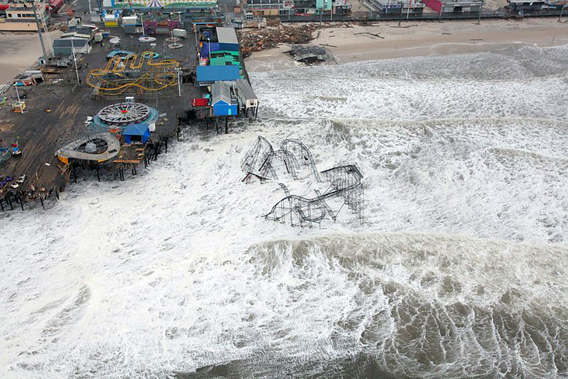 A number of observers have expressed hope that the Obama Administration, fresh from a re-election victory in the U.S., will take a more active and ambitious role at this year’s UN Climate Summit, held in Doha, Qatar. The summit opens amid fresh—and increasingly dire—warnings over climate change from the World Bank, the International Energy Agency, and the UN itself.

“[Obama] missed the chance to lead the world at Copenhagen but can now commit the rich world to a generous agreement,” journalist John Vidal writes at the Guardian, adding that “Britain, who will send two ministers to Doha, can lead Europe. A new Chinese administration can be flexible.”

Although climate change was only rarely mentioned in the recent U.S. presidential campaign, the recent devastation wrought by Hurricane Sandy has renewed discussion in the U.S. media after years of absence. President Obama, himself, mentioned climate change as a priority in his victory speech following his re-election in early November and at his first press conference he called for a national “conversation” on the issue, but noted that economic recovery came first before climate action.

“I think there will be expectations from countries to hear a new voice from the United States,” Jennifer Morgan, director of the climate and energy at the World Resources Institute in Washington, told the Associated Press.

Su Wei, top climate negotiator for China, has also stated that he expects a more engaged U.S. now that the Obama Administration has successfully won a second term.

The Obama Administration has also come under renewed pressure on climate change at home as well. Last week an estimated 3,000 activists marched around the White House calling on the administration to cancel once-and-for-all the Keystone XL pipeline, which would bring tar sands oil south from Canada to the Gulf of Mexico. Tar sands oil bare a significantly larger carbon and freshwater footprint than conventional oil.

The U.S. has long been viewed as climate pariah worldwide. The country, which holds the largest historic responsibility for climate change, refused to sign the landmark Kyoto Treaty under the George W. Bush Administration. For years, the Bush Administration was viewed as obstructionist at international climate negotiations; at one point it was given a dressing down by Papua New Guinea climate negotiator, Kevin Conrad, who told the superpower to much applause to “Please, get out of the way.”

Expectations both at home and abroad changed when Barack Obama was elected in 2008, but faltered soon at Copenhagen a year later. There the U.S. pledged to cut greenhouse gas emissions by 17 percent from 2005 levels by the end of the decade—a commitment much less ambitious goal than other wealthy countries. The Obama Administration tried in its first few years to pass a comprehensive climate bill, but this died quietly in the Senate. While, the administration made some gains on vehicle efficiency and supporting renewable energy, it also pursued controversial oil drilling in the Arctic sea, pushed an “all of the above” energy strategy that expanded fossil fuel exploitation, and went mum on the issue of climate change.

In fact, many viewed the Obama Administration as growing increasingly ambivalent about global warming in its first term, even as sea levels rose beyond expectations, Arctic sea ice vanished faster than anticipated, and new research showed increasingly clear links between devastating extreme weather and a warming planet.

“We need the U.S. to engage even more,” EU Climate Commissioner Connie Hedegaard told The Associated Press. “Because that can change the dynamic of the talks.”

According to recent reports by the EIA and the World Bank the stakes couldn’t be higher. The EIA has warned that in order to avoid dangerous climate change, two thirds of the known fossil fuel deposits worldwide would have to be left untouched. Meanwhile, last week the World Bank released a bleak report that drew a bleak picture of a world where temperatures have risen by 4 degrees Celsius above pre-industrial levels, including coastal cities under siege from rising sea levels, coral reefs disintegrating from ocean acidification, species vanishing, and global agriculture under sever threat from increasing drought and heatwaves.

At this point, it is unlikely that Obama himself will make an appearance at Doha.

From NASA: “This color-coded map displays a progression of changing global surface temperatures anomalies from 1880 through 2011. The final frame represents global temperature anomalies averaged from 2007 to 2011.”