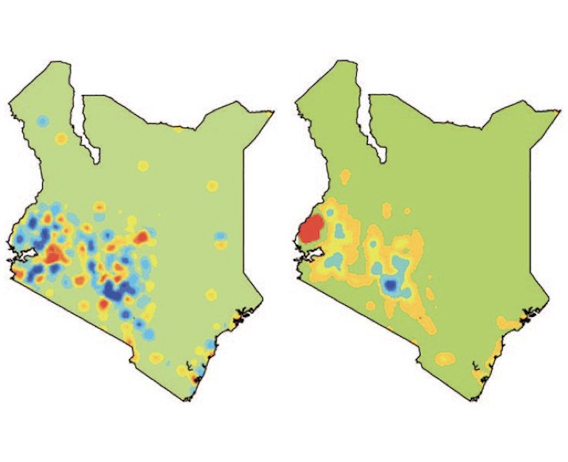 These maps represent how people and parasites moved in this study. The red areas represent areas with more movement out of them; blue represents areas with more movement to them; yellow represents areas with equal movement in and out. The map of Kenya on the left depicts human movement, with equal travel to and from several areas. On the right, mosquito parasite movement clearly flows out of the Lake Victoria region (large red patch) and into the Nairobi area (large blue patch). Image courtesy of Caroline Buckee, Harvard University.

Malaria parasites can stow away silently in a person’s bloodstream. Without any symptoms to betray them, their human host can unwittingly transport the parasites hundreds or thousands of miles. Tracking them has been nearly impossible, especially in poor countries. Now, researchers have harnessed a new tool: the burgeoning number of cell phone users in Africa, which help trace how malaria spreads.

A team led by Amy Wesolowski of Carnegie Mellon University in Pittsburgh found that although travelers moved frequently among cities, only some of them were likely to bring malaria along for the ride. The scientists reported their findings Oct. 12 in Science.

The researchers tracked anonymous data from 15 million mobile phone users in Kenya between June 2008 and June 2009. They overlaid the daily movements of subscribers onto detailed maps of known cases of malaria. This yielded estimates of how far and how often the human travelers spread the parasites.

Before this, it was difficult to track how the malaria parasite moved among populated regions. Researchers have relied on crude estimates based on road networks and census data.

“The mobility data we had [from cell phones] was an order of magnitude larger than any other data like this, so the scale of it was very new,” said Harvard University epidemiologist Caroline Buckee, a study co-author, in an interview with mongabay.com.

Public-health workers have mostly succeeded in wiping out malaria in Kenya’s capital, Nairobi. However, the disease continues to pop up in the crowded city. The new study suggests the parasites are like marbles rolling downhill from the high-malaria Lake Victoria region to otherwise malaria-free Nairobi, and will continue to do so until the source of the disease is eliminated in Lake Victoria.

“It’s very clear that the parasites are coming from Lake Victoria and ending up on the periphery of that region and in the capital,” said Buckee.

The researchers also used the high density of cell phone towers in Nairobi to answer a contentious question: Does malaria spread within the city itself? The results showed little evidence of transmission in the center of the city, but there are signs malaria does migrate around the periphery. “So there would be a good place to start looking for pockets of transmission,” Buckee said.

There are a few gaps in this picture of how malaria moves. For instance, the scientists do not yet have data on people moving across Kenya’s borders. Similar projects in other African countries may help expose those patterns. Further, the malaria maps don’t account for seasonality, which affects the ebb and flow of mosquito populations.

Still, the technique has unveiled worthy data, other scientists say. “What a novel notion to use mobile phone data to track disease—still imprecisely, but provocatively,” William Shaffner, who heads the Preventive Medicine Department at Vanderbilt University Medical Center in Nashville, Tenn., told mongabay.com.

The new method can pinpoint hot spots and direct public health efforts, he noted. “You can now rifle your interventions instead of shot-gunning them. It gives you the potential to direct your limited resources,” Shaffner said.

Rina Shaikh-Lesko, a former epidemiologist, is a graduate student in the Science Communication Program at the University of California, Santa Cruz.

(10/31/2011) What’s the world’s scariest species? Runner-up would likely be the mosquito species that transmit malaria. Nearly a million people die from malaria annually, making up some 2.23 percent of deaths worldwide.

(07/31/2011) In 2009, 781,000 people died of malaria worldwide and nearly a quarter billion people contracted the mosquito-bourne disease, according to the World Health Organization (WHO). While the impacts of malaria on people—among the world’s worst diseases—have long been researched, a new study in Biological Conservation finds that malaria has a significant indirect impact on protected species. Many species contract various malaria strains, but the study also found that malaria in humans has the potential to leave endangered species unprotected.

(06/16/2010) A new study shows that deforestation in the Amazon helps spread disease by creating an optimal environment for malaria-carrying mosquitoes. The study, published in the online issue of the CDC journal Emerging Infectious Diseases, found that clearing forests in the Brazilian Amazon raised incidences of malaria by almost 50 percent.

(02/05/2009) Isolongifolenone, a natural compound found in the Tauroniro tree (Humiria balsamifera) of South America, has been identified as an effective deterrent of mosquitoes and ticks, report researchers writing in the latest issue of Journal of Medical Entomology.

(02/25/2008) Researchers have developed a spatial distribution map for malaria. The results are published in Public Library of Science (PLoS) Medicine.