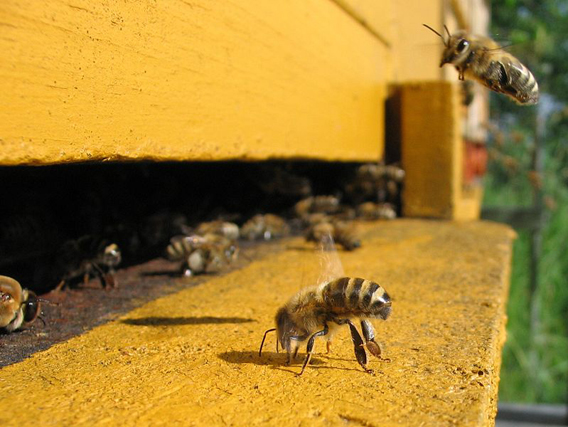 Honeybees in an apiary in Germany. Photo by: Björn Appel.

The evidence that common pesticides may be partly to blame for a decline in bees keeps piling up. Several recent studies have shown that pesticides known as “neonicotinoid” may cause various long-term impacts on bee colonies, including fewer queens, foraging bees losing their way, and in some cases total hive collapse. The studies have been so convincing that recently France banned the use of neonicotinoid pesticides. Now a new study finds further evidence of harm caused by pesticides, including that bees who are exposed to more than one chemical, i.e. neonicotinoid and pyrethroid, were the most vulnerable.

In agricultural areas, pesticides are not sprayed in a controlled environment, instead insects like bees may become exposed not to just one type of pesticide, but a whole cocktail of them. Given this, researchers with the University of London were curious as to how bees, which have recently declined in many parts of the world, fared when faced with a mix of different chemicals versus just one.

The researchers found that bees exposed to imidacloprid lost 41 percent of their worker bees in four weeks compared with 30 percent for the control colonies. Overall, worker productivity was slowed, meaning less food for the hive and fewer bees making it out of the larva stage, findings that are buoyed by past research. The bees exposed to only gamma-cyhalothrin experienced a higher rate of mortality for worker bees, leveling off at 51 percent. But the bees exposed to both chemicals were the worst off, losing 69 percent. Two of the ten colonies treated with both chemicals completely collapsed within just four weeks.

“It’s certainly concerning that having these combination of pesticides outside could be causing such a severe impact […] we’ve only looked at two pesticides but we know that there are hundreds of pesticides out there,” lead author Richard Gill says in a Nature video.

In all, these impacts also likely make the bees more vulnerable to other threats, such as disease.

Past research has also shown that exposure to pesticides can result in Colony Collapse Disorder (CCD) over a period of months. Scientists in the U.S. fed tiny doses of neonicotinoid pesticides to 16 hives, and left four hives unexposed. In the first few months all the bee hives remained healthy, but after around six months over 90 percent (15 out of 16) of the hives fed with the pesticides had collapsed, while the four control hives remained healthy.

“There is no question that neonicotinoids put a huge stress on the survival of honey bees in the environment,” lead author Chensheng (Alex) Lu, an associate professor at the HSPH, told mongabay.com back in April.

It has taken a long time for scientists to make the connection between bee health and pesticides in part because of the way agro-chemicals are tested. When undergoing testing, scientists look to see if pesticides are lethal, for example if they immediately kill beneficial insects like bees. However, the focus is not on the “sublethal” impacts of pesticides, i.e. impacts that don’t outright kill bees, but harm them over the long-term. The other problem is that testing is over short period of times, whereas sublethal impacts may not become clear for weeks or even months. The picture becomes even more complicated when one considers that pesticides may make bees more vulnerable to other well-known impacts, such as habitat loss and disease.

The decline in bees has become a major concern since bees are among the world’s most important pollinators, both for agricultural crops and wild plants. Some produces in North America and Europe have seen 90 percent of their hives collapse. While such periodic collapses have occurred in the past, probably linked to disease, the current crisis appears much worse. The economic value of honeybees in the U.S. alone has been estimated at $8-12 billion.

(06/04/2012) Following research linking neonicotinoid pesticides to the decline in bee populations, France has announced it plans to ban Cruiser OSR, an insecticide produced by Sygenta. Recent studies, including one in France, have shown that neonicotinoid pesticides likely hurt bees’ ability to navigate, potentially devastating hives. France has said it will give Sygenta two weeks to prove the pesticide is not linked to the bee decline, known as Colony Collapse Disorder (CCD).